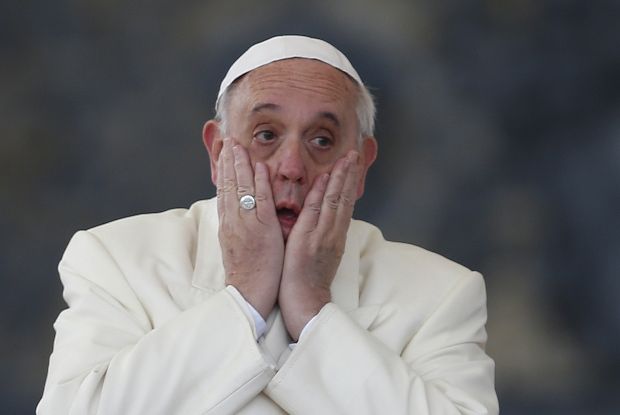 Pope Francis rubs his face after completing the speaking part of his general audience in St. Peter's Square at the Vatican Jan. 15. (CNS photo/Paul Haring)

“Difficulties and persecution, when they are lived with trust, confidence and hope, purify the faith and strengthen it,” he said in his general audience talk in St. Peter’s Square Jan. 15.

“Be true witnesses of Christ and his Gospel, authentic children of the church, always ready to give reasons for your hope with love and respect,” he told pilgrims from the Middle East.

The pope continued a series of talks on the sacrament of baptism, underlining that it is through baptism that “we become members of the body of Christ and the people of God.”

Just as parents pass the gift of life from generation to generation, the gift of grace is passed on with each person’s rebirth through baptism, he said.

To underline how important baptism is for the people of God and for keeping the faith alive, Pope Francis pointed to the experience of Christians in Japan in the early 17th century.

Every single priest was expelled from the country, he said, while thousands of Christians there were killed and those who were left went underground, praying and practicing the faith clandestinely.

When missionaries were allowed to return after nearly 250 years, they found thousands of Christians ready to help the church blossom again, said the pope, who as a young Jesuit wanted to serve as a missionary in Japan, but was turned down because of concerns about his health.

Japanese Christians “survived with the grace of baptism,” which, because there were no priests, was conferred to every newborn by his baptized mother or father, he said.

“They maintained, even in secrecy, a strong spirit of community because baptism made them become one single body in Christ: they were isolated and hidden, but they were always members of the people of God, of the church,” he said. “We can learn a lot from this history.”

Later, in a greeting to pilgrims from Jordan and the Holy Land, Pope Francis urged them to learn from the Japanese example how to keep “the flame of faith always lit, transmitting it from one generation to the other.”

Every Christian has the duty to transmit the faith, he said in his general audience talk. “Each of us is a link in this chain.”

“With this grace, the Christian people journey over time like a river that irrigates the earth and spreads God’s blessing across the world.”

Christians are disciples “because we receive the faith and missionaries because we transmit the faith,” he said. “All of us in the church are disciples forever, for our whole life,” even bishops and the pope.