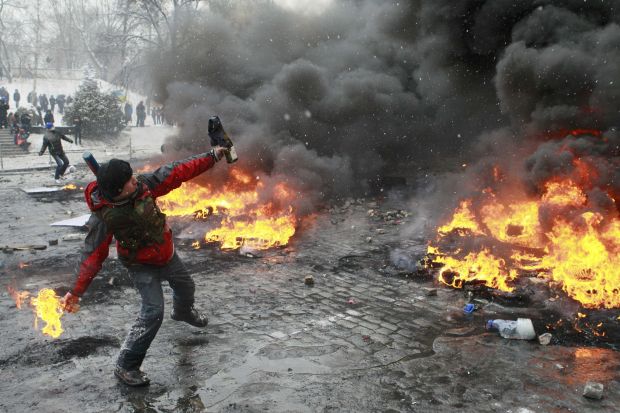 VATICAN CITY (CNS) — As protests against the Ukrainian president spread to cities across the country, Pope Francis offered his prayers for the nation’s people, “particularly for those who lost their lives in the last few days and for their families.”

At least three protesters died Jan. 22 in Kiev, Ukraine’s capital and the site of anti-government protests since late November.

Speaking after reciting the Angelus Jan. 26 with visitors in St. Peter’s Square, Pope Francis said, “I hope there would develop a constructive dialogue between the institutions and civil society and, avoiding any recourse to violent actions, a spirit of peace and search for the common good would prevail in the hearts of all.”

According to news reports, the main demonstration in Kiev’s Independence Square — calling for closer ties to Europe, an end to government corruption and greater respect for human rights — has remained nonviolent. But small groups of other protesters have been throwing rocks and firebombs at police and have occupied several government buildings in Kiev and other cities.

Archbishop Sviatoslav Shevchuk of Kiev-Halych, major archbishop of the Ukrainian Catholic Church, and the leaders of other churches and religious groups met embattled President Viktor Yanukovich Jan. 24 and offered to mediate in the name of peace.

The church-run Religious Information Service of Ukraine said Archbishop Shevchuk told the president that while they were pressing for peace and the continued unity of Ukraine, “we are, have been, and will be with the people.”

The archbishop and other religious leaders insisted their clergy have a right and duty to minister to the protesters, a service he said also contributes to keeping the demonstrations peaceful.

NEXT: Pope advances sainthood cause of Sisters of Charity of Quebec founder