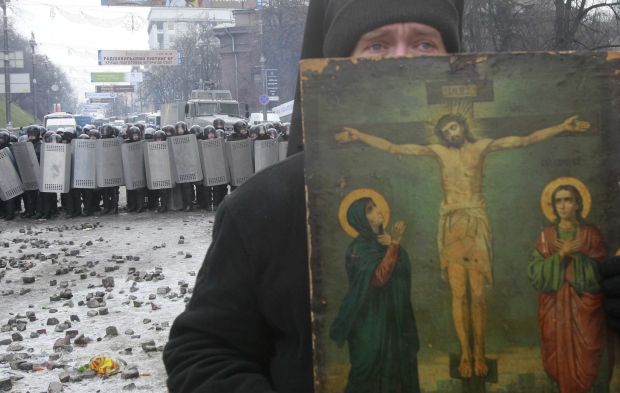 OXFORD, England (CNS) — The head of the Ukrainian Catholic Church appealed for calm as violence worsened between police and pro-European Union demonstrators in Kiev, Ukraine.

Archbishop Sviatoslav Shevchuk of Kiev-Halych, major archbishop of the Ukrainian Catholic Church, said Jan. 21 that he was dismayed and saddened by as violence escalated for the third consecutive day in and around Kiev’s Maidan — or Independence — Square.

“In these exceptional circumstances, I appeal to all faithful of the church, the Ukrainian people and all people of good will: In the name of God, stop the bloodshed. Violence was never the way to build a free and independent state,” the archbishop said.

Protesters seeking stronger ties with Western Europe peacefully occupied the square in November after President Viktor Yanukovich’s withdrawal from a landmark deal with the European Union. Violent clashes erupted Jan. 19 after new laws criminalized “slandering” of government officials and the wearing of masks or helmets at demonstrations.

Archbishop Shevchuk said bloodshed would never “reconcile hearts or bring a positive outcome,” while “fear, aggression and anger” would be no help in determining Ukraine’s future.

He also urged the Ukrainian government to “take responsibility for the future.”

“Listen to your people, hear them, do not use violence against them or repressive mechanisms,” the archbishop said.

“I appeal to society, to citizens, members of various NGOs, especially protesters standing on the Maidan. I beg you to go back to peaceful protests. Do not let emotions get the better of you.”

The package of laws adopted by the government also would ban unauthorized tents in public areas and prescribes jail terms for blockading public buildings. It was to take effect Jan. 22. United States and EU officials criticized the legislation. 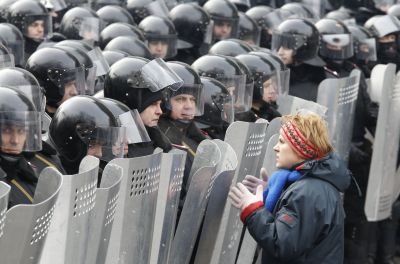 After backing cross-party talks, President Yanukovich warned Jan. 20 that the violence posed “a threat not only to Kiev but to the whole of Ukraine.” However, opposition leaders accused the government of paying “titushkos,” or thugs, to fuel clashes as a pretext for imposing a state of emergency.

Archbishop Shevchuk, who has supported the protests, said Jan. 13 that he received a letter from the Culture Ministry threatening to ban the Ukrainian Catholic Church because of a “systematic disregard for the law” by clergy with “alleged support from the church authorities.”

At a Jan. 17 meeting with the archbishop, Culture Minister Leonid Novokhatko praised the “peacekeeping role” of Ukrainian Catholic priests and clergy from other denominations, and denied pressuring the church or planning “legal action” against it.

However, Father Ihor Yatsiv , Ukrainian Catholic Church spokesman, confirmed Jan. 16 that the church’s website had been compromised by cyberattacks through the national telecommunications company, Rostelecom, via neighboring Russia.

Speaking Jan. 21 to Vatican Radio, Paris-based Ukrainian Catholic Bishop Borys Gudziak said the protests were “something more than just a reaction” to the government’s withdrawal from the EU deal, and should be understood in the light of Ukrainian experiences of Soviet repression.

He explained that the mass demonstrations reflected “the yearning of Ukrainians to live in another way,” and said the country’s Council of Churches and Religious Organizations had warned law enforcement officers in December to “take into account the demands of protesters” and uphold “the constitutional right to peaceful assembly and expression.”

“That the Ukrainian Interior Ministry is trying to intimidate known figures and threaten churches is nothing new for the Greek Catholic church,” said the U.S.-born bishop.

“The present movement is acting not just for political dignity and freedom, but also for anthropological, psychological and spiritual freedom.”

In his appeal, Archbishop Shevchuk said Ukrainian Catholic bishops and priests should “watch over the souls entrusted to them” and “proclaim the gospel of Christ’s peace.”

He also urged Ukrainian judges to avoid tarnishing their honor “with unjust decisions,” after warnings that some detained protesters could face 15-year jail terms for stoking “mass disturbances.”