Archbishop prays for peace in Ukraine, God’s protection of its people 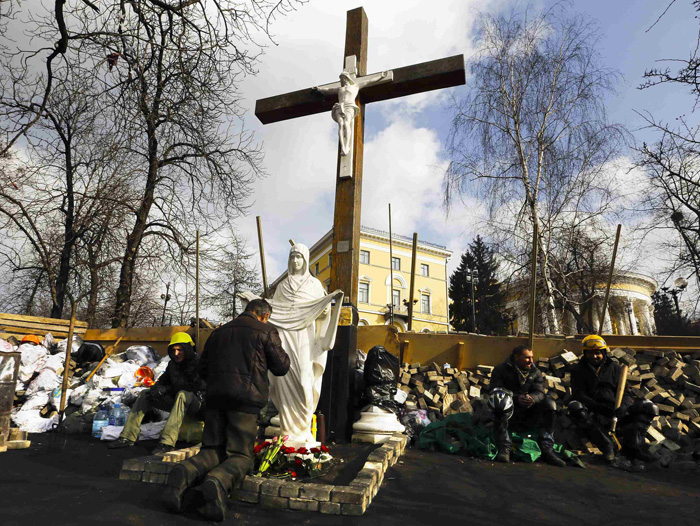 A man kneels in prayer in front of a statue of Mary and a crucifix by a barricade near Independence Square in Kiev, Ukraine, Feb. 21. Scores of protesters were killed and hundreds were wounded by snipers on Kiev's Independence Square and its nearby streets, according to medical workers treating the victims. (CNS photo/Yannis Behrakis, Reuters)

PHILADELPHIA (CNS) — Ukrainian Catholic Archbishop Stefan Soroka of Philadelphia called for “fervent prayers” that God would keep the people of Ukraine strong as they mourn the loss of life in the ongoing strife in that country and that Mary “would extend her protective mantle” over them.

“Throughout the world, people are watching in horror at the surreal scenes of violence and brutality on the streets of (Kiev) and other cities throughout Ukraine,” Archbishop Soroka said in a statement released late Feb. 20.

“The images of confrontation and killing, of widespread fires and billowing smoke against a darkened night sky, and the winter air punctuated by the staccato sounds of gunfire and explosive devices are seared in many of our hearts and minds,” he said.

For such “troubled times” he urged Catholics to find inspiration in the words of Verse 11 of the 29th Psalm: “May the Lord give strength to his people; may the Lord bless his people with peace.”

(See the prayers for peace suggested by the Ukrainian Archdiocese of Philadelphia here.)

Earlier on Feb. 20 at least 75 people were reported killed in clashes between police and protesters in Kiev, Ukraine’s capital.

According to news reports, with the help of Russian and European mediators, an agreement to end the protests and bloodshed was reached early that morning.

The massive death toll was preceded by a night of violent confrontations Feb. 18-19, which left more than two dozen people dead. Pope Francis and Ukrainian church leaders had called Feb. 19 for an end to all violence and a serious commitment to dialogue for the good of Ukraine.

Archbishop Soroka called on Catholics to remember Ukraine during the many prayers for peace they and the celebrant recite during the Divine Liturgy, from the beginning to the end.

“And as we leave our churches, we hear the words, ‘Let us go forth in peace,'” he said.

Released with his statement was “A Prayer for Peace in Ukraine” and special petitions for the Divine Liturgy.

“During these troubling and disturbing times, as many are thinking about family and friends in Ukraine or others are filled with anxiety about the events in their ancestral homeland, we implore our Lord and Savior Jesus Christ to grant us his peace,” Archbishop Soroka said. “May His peace enable us to be not afraid. (Jn 6:20).”

The Ukrainian Catholic Archdiocese of Philadelphia has 67 parishes in Philadelphia and elsewhere in Pennsylvania as well as in Delaware, Maryland, New Jersey, Virginia and the District of Columbia. The archdiocese has about 54 priests serving a Catholic population of about 15,700.

One of the Ukrainian Catholic priests in the archdiocese, Father Roman Pitula, said that for Ukrainian-Americans and the many Ukrainian nationals living in the U.S. the situation in their homeland is never far from their thoughts or their hearts.

He told the Republican Herald newspaper in Pottsville, Pa., that every day he pays close attention to what is going on in his home country and prays for peace.

“Being born there, I feel really bad and sorry for all those people. They are in a great struggle for democracy and human rights,” he told the paper. “Even though I’m a U.S. citizen, I was born there and I can’t forget. It’s in our hearts always.”

In his statement Archbishop Soroka offered a prayer for Ukraine: “May the Lord strengthen his people with courage and fortitude as they endure the suffering and mourn the loss of their loved ones. May he strengthen his people in Ukraine and guide them to a peaceful resolution of this conflict and open their minds to dialogue and reconciliation. May they end the divisive violence and restore tranquility to their nation.”

Since November, protesters in Kiev have been pushing for early elections and constitutional reforms that would reduce presidential powers.

That month, Ukraine seemed poised to join the European Union, but President Viktor Yanukovich instead signed a similar deal with a Russian-led common market of former Soviet states.

Violent clashes erupted Jan. 19 after new laws criminalized “slandering” of government officials and the wearing of masks or helmets at demonstrations. Since then tens of thousands of protesters have gathered for rallies at Independence Square, and actions by police against them have grown increasingly violent.