Parish shares plan to revitalize, rebuild and reach the ‘unchurched’

An attendee at the meeting at St. Mary Magdalen Church asks Tom Corcoran a question during his two-hour presentation Feb. 20. 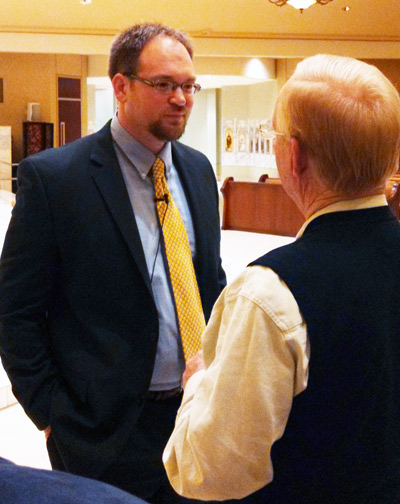 Tom Corcoran, co-author with his pastor of the book “Rebuilt: The Story of the Revitalization of the Church of the Nativity in Baltimore,” speaks with Chuck Kane of St. Eleanor Parish, Collegeville, Feb. 20.

At next Sunday’s Mass, look around and listen. If you see empty spaces in pews and hear lackluster words and uninspiring music, you might realize it’s time to revitalize your parish. But how?

Author Tom Corcoran showed one way during his presentation Thursday evening, Feb. 20 at St. Mary Magdalen Parish in Media. He laid out the blue prints for how his suburban Baltimore parish became the kind of vibrant, dynamic, mission-focused faith community parishioners always wanted.

In attendance were more than 150 people including about 15 priests and a smattering of religious sisters and deacons joined by lay people, mostly leaders of their parish communities in Philadelphia and the suburbs. Most had read or heard about the book Corcoran co-wrote with his pastor of Nativity Parish, Father Michael White: “Rebuilt: The Story of the Revitalization of the Church of the Nativity in Baltimore.” (See a review here.)

Corcoran is on staff at the church, and married father of six children. He recounted the genesis of Nativity’s turnaround, which sprung from what everyone thought was a great idea: Family-Friendly Fridays in Lent. Each session would feature a guest speaker, Mass, stations of the cross and a free dinner for about 600 people.

Except it wasn’t friendly for the staff who had to run the evening, Corcoran said, all of whom were exhausted running many such programs at the parish. The clincher came when the pastor, serving the food, fielded an angry complaint about the free food from a parishioner. That is when he and the ragged staff began to ask, “Why are we doing this?”

“We felt no purpose to our ministry,” Corcoran said. “We were on a treadmill that led to despair and frustration. When we lose our ‘why,’ we lose our way.”

He said they realized that the parish’s activities were not in line with the mission of the church. “It’s not about bingo and pot-luck dinners, it’s to ‘Go and make disciples of all nations,’” he said, citing the Gospel of Matthew.

The Nativity parish team knew they “needed to change our focus from churched people to unchurched people,” and to concentrate the parish’s efforts “not on the people in the pews but the people who have stopped coming.”

After numerous discussions, visits to Evangelical Protestant “mega churches” and trial and error, Nativity went from hosting 1,600 people at weekend Masses to 4,000 today.

The shift toward Catholics and others who are not coming to church was the first of three main strategies Corcoran explained during his two-hour presentation, punctuated by two 10-minute discussion breaks by the audience in St. Mary Magdalen’s spacious church.

The other two were to prioritize the weekend experience – “we need to give the weekend Masses and related programs most of our attention,” he said – and to move people to action, helping them take ownership of their spiritual growth and the missionary call of the parish to “make disciples.”

On the first theme, Corcoran related how his parish identified who was not coming to church and why. A hypothetical man leads a highly stressful family and work life, has many responsibilities and needs to rest on Sundays, including recreations such as golf, football or spending time with children.

Nativity’s staff realized they were competing with the person’s free time and the many activities pulling on him. He was not going to church because it was boring, badly executed and not relevant to his life. And the obligation to attend Mass also did not exist in this hypothetical person’s mind.

“The obligation to go to church, those days are dead and gone,” Corcoran said. “We need to approach this differently. The difference now is the relationship with Jesus Christ. We now have a culture that pushes itself to the limit, so Sundays aren’t sacred. We need to make it relevant for people.”

Corcoran’s second strategy for revitalizing a parish was to prioritize the weekend Masses and related programs because if Mass is “boring or bad, people will assume God is boring and irrelevant to their life.”

This includes especially the music, which Corcoran called “the water in which the Mass sinks or sails.” 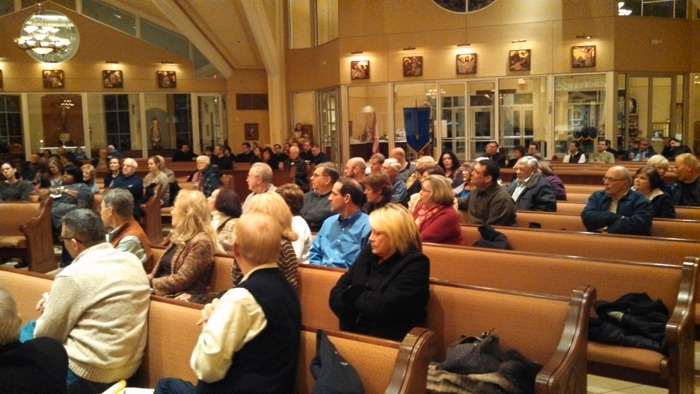 More than 150 people attended the talk by Tom Corcoran Feb. 20 at St. Mary Magdalen Parish in Media on how his Baltimore-area parish rebuilt itself into a Catholic”mega parish.”

Nativity Parish, he said, had a folk guitar Mass, a Mass with a choir, cantor and organist and a “quiet” Mass without music. His assessment of the music ranged from “struggling” to “not good,” but the result was that few people sang in church. And the pastor was reluctant to change the music so as not to offend the singers and musicians participating.

So the parish held a town hall meeting to discuss changing the music ministry, “and a near riot broke out,” Corcoran said. “Music has the greatest potential to reach people, and because of that it is a battle ground.”

Prayer and feedback by parishioners led to investing in – in other words, paying – competent and talented musicians, not just volunteers.

Today the parish uses entirely contemporary Christian music in all its liturgies, and Father White does not insist on his personal preference for traditional church music.

“We do invest in music financially,” Corcoran said, advising other parishes to plan their budgets “to pay people who are advanced in that skill.”

Another major area of concern in Nativity’s plan is on preaching and teaching the Word of God. Preparing the homily or catechesis in parish programs is the key to “helping people see the relevance of God’s word in their lives,” Corcoran said. “There’s not a better way to provide spiritual direction to such a large number of people at one time.”

Nativity Parish sees people who are involved in activities on the parish campus as ministers. They include parking ministers, greeters at the doors and “hosts” (a.k.a. ushers) who seat people in the pews. “These people provide layers of welcoming, to say ‘We’re glad you’re here,’” Corcoran said.

There is also a coffee and refreshments “café” after each Mass for community building, and three age levels of children’s liturgies while parents worship in the main church: Kid Zone for children age 3 and under, All Stars for children 3-6 and Time Travelers for children in grades one through four.

Beyond the ministerial activity at the parish is the missionary work that takes place outside it, including local and global outreach and service opportunities.

That leads to the third pillar of parish revitalization, moving parishioners to take action.

Corcoran suggested several steps that can motivate people toward getting involved. They include prayer, both personally and in small groups; community service, and generous sacrificial giving to sustain the parish financially. “Ministry takes money,” he said.

Today Nativity Parish – see their atypical parish website here – uses videos and lighting effects during liturgies, weekend “message series” such as last weekend’s “tough love” theme, and some Latin chants in the music. And it continues to reach out to the “unchurched” people in the community.

Most people in attendance agreed with Corcoran’s core message for parish revitalization.

“It was inspiring,” said Bob Morrow of St. Mary Magdalen. “The focus is more outwardly, keying in on (people not coming to church) and not ignoring the unchurched.”

Chuck Kane of St. Eleanor Parish in Collegeville said his parish is “trying to open up our music ministry to younger, ‘garage band’ kind of kids, to get them involved in praise and worship kind of music. We’re trying to find the right combination to bring these people back. We’re taking baby steps.”

Ministry was the key take-away for Liesl Wuest of St. John Chrysostom Parish, Wallingford. “Getting people involved in volunteering in the church and giving back should help it grow,” she said. “I think that’s what we need.”

Most participants agreed with Corcoran that prayer was the essential component to any effort, along with perseverance.

“It’s not going to be quick and easy,” said Susan Hackett, also of St. John’s. “It’s going to be a long and difficult road but worth trying to go down.”

PREVIOUS: Catholics will ‘man up’ with Men’s Spirituality Conference in March

NEXT: Archbishop prays for peace in Ukraine, God’s protection of its people