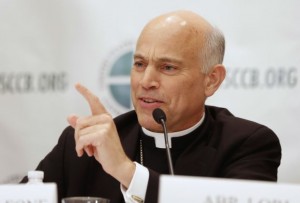 WASHINGTON (CNS) — A marriage amendment to the U.S. Constitution “would secure in law throughout the country the basic truth known to reason that marriage is the union of one man and one woman,” said San Francisco Archbishop Salvatore J. Cordileone.

In a Feb. 19 letter, he urged the U.S. House of Representatives to pass the Marriage Protection Amendment, a joint resolution sponsored by Rep. Tim Huelskamp, R-Kan., and introduced last August.

The archbishop, who is chairman of the U.S. bishops’ Subcommittee for the Promotion and Defense of Marriage, urged other House members to co-sponsor the measure.

To amend the U.S. Constitution, it must be approved by two-thirds of the House and the U.S. Senate and then be ratified by three-fourths of the states.

“An amendment to the U.S. Constitution is the only remedy in law against this judicial activism that may ultimately end with federal judges declaring that the U.S. Constitution requires states, and consequently the federal government, to redefine marriage,” the archbishop wrote in the letter, which was addressed to Huelskamp.

One of the most recent was a Feb. 13 ruling by a federal judge that struck down Virginia’s voter-approved ban on same-sex marriage as unconstitutional. U.S. District Court Judge Arenda Wright Allen stayed her ruling to allow an appeal to be filed, so same-sex marriage licenses will not be granted immediately.

In recent months, decisions similar to Wright Allen’s have been handed down by federal judges in Utah and Oklahoma. On Feb. 12, a federal judge ruled that Kentucky must recognize same-sex marriages performed in other states or other countries; a Kentucky couple sued the state Feb. 14 to force the state to issue same-sex marriage licenses. Similar lawsuits have been filed in Alabama and Louisiana.

Catholic and other opponents of same-sex marriage point to the U.S. Supreme Court’s decision in United States v. Windsor that found the federal Defense of Marriage Act unconstitutional but also required the federal government to respect the primacy of the states in defining marriage.

Archbishop Cordileone wrote that “just as Roe v. Wade mandated a constitutional right to abortion throughout the country, we now have the possibility of another bad decision mandating a constitutional change in the meaning of marriage in order to promote (at least to begin with) ‘marriages’ between two people of the same sex throughout the country.”

He told Huelskamp the proposed Marriage Protection Amendment to the U.S. Constitution is “a needed remedy.”

NEXT: ‘Restorative justice,’ not death penalty, urged for accused bomber