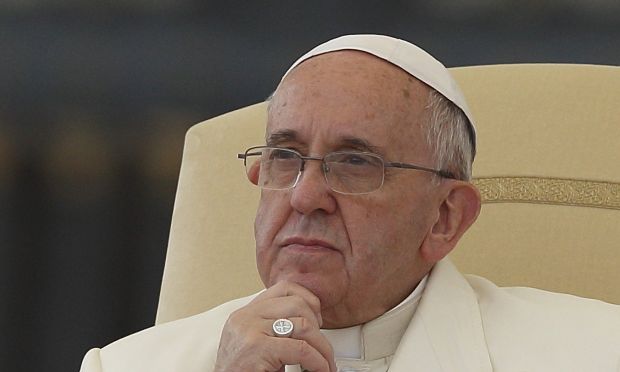 Pope Francis looks on as he leads his general audience in St. Peter's Square at the Vatican Feb. 5. (CNS photo/Paul Haring)

BALTIMORE (CNS) — U.S. Cardinal Edwin F. O’Brien doesn’t know what will come out of the Synod on the Family set for October, but the former archbishop of Baltimore believes it will be significant.

“Hold onto your seats,” Cardinal O’Brien told a gathering of seminarians and faculty at St. Mary’s Seminary and University in Baltimore. “I think Pope Francis wants to stir things up and allow people to raise questions. I don’t think we’re going to see a change in doctrine, but we will see a change in tone, and we might see some disciplinary modifications.”

Those modifications might include adjustments in annulment procedures, Cardinal O’Brien said.

“I think most bishops are very concerned that they have more say in annulments in a responsible way,” he said Jan. 27.

Cardinal O’Brien’s comments were part of a wide-ranging address that touched on the retirement of Pope Benedict XVI, the election of Pope Francis and a look at how Pope Francis has governed the church in his first year.

Cardinal O’Brien, grand master of the Equestrian Order of the Holy Sepulchre of Jerusalem, was present in the room when Pope Benedict announced he was stepping down in 2013. The cardinal was also part of the conclave that elected the new pope.

As head of the Buenos Aires Archdiocese, the future Pope Francis dealt as an outsider with the curia that helps govern the church, Cardinal O’Brien said, an experience that helped shape how he would interact with the curia when Cardinal Jorge Bergoglio became pope.

“He’s seen its strengths and its weaknesses,” Cardinal O’Brien said, noting that the pope’s establishment of an eight-member council of cardinals from around the world shows that the pope believes he needs advisers both within and outside the curia.

“I think a year from now, we’ll hardly know what the structure was, there will be so many different things that will have taken place,” Cardinal O’Brien said. “Maybe the heads of some conferences of bishops will be involved. I don’t know. But we will know by the end of February because the group of eight will meet again and come up with formal recommendations.”

Cardinal O’Brien highlighted several themes of Pope Francis’ young papacy, among them the importance of expanding the pope’s circle of advisers, subsidiarity, solidarity with the poor, evangelizing at the periphery of the culture and acting as a missionary church.

The cardinal cited the pope’s interview with an Italian atheist magazine editor and the pope’s strong focus on mercy as examples of his willingness to reach out to others. The pope has opened up discussions with those who feel alienated from the church, Cardinal O’Brien said.

The pope is modeling an example of being prepared to go anywhere and share the faith with anyone, Cardinal O’Brien said.

Inspired by the pope’s focus on the poor, Cardinal O’Brien said he has become more conscious of how many times the Old and New Testaments make references to the poor. It reminds him to question himself and think about what the readings mean in light of what the pope is asking people to do in reaching the poor.

Noting that Pope Francis often compares the church to a mother, the cardinal said a mother never deserts her children.

“She’s always available to listen and always to extend mercy,” he said.

NEXT: Prison chaplain sees focus on the personal as needed in healing