Catholics, evangelicals team up in pressing for immigration reform 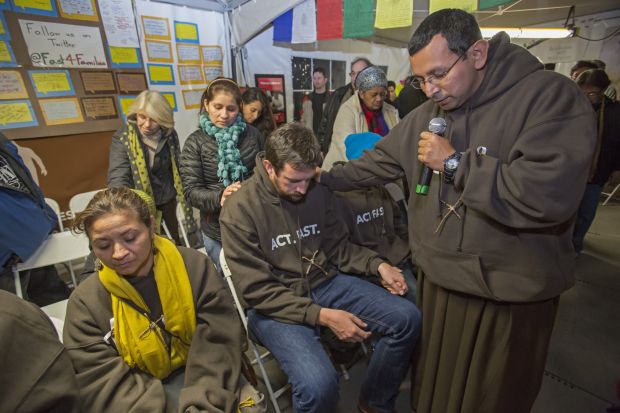 Franciscan Brother Juan Turios of Action Network prays Nov. 30 with immigration reform advocates taking part in "Fast for Families" in a tent on the National Mall near the U.S. Capitol in Washington. The fast is aimed at pressuring the U.S. House of Representatives to vote on comprehensive immigration reform legislation. (CNS photo/Jim West)

WASHINGTON (CNS) — In a joint letter to members of Congress, Catholic bishops and evangelical leaders pleaded for “common sense fixes to our immigration policies” by passing legislation this year.

In the Feb. 26 letter, 11 bishops and half a dozen evangelical leaders said that as religious leaders, “we live every day with the reality that our immigration system does not reflect our commitment to the values of human dignity, family unity and respect for the rule of law that define us as Americans.”

At a briefing earlier in the week, the prospects for passage of an immigration bill this term were described as not impossible, but complicated.

Among the Catholics signing the letter were Auxiliary Bishop Eusebio L. Elizondo of Seattle, chairman of the Committee on Migration of the U.S. Conference of Catholic Bishops, and the immediate past chairman, Los Angeles Archbishop Jose H. Gomez.

The letter said the signers each day “witness the human tragedies created by our current system, including the separation of families and the violation of basic human dignity.”

Echoing the language about the “rule of law” used by some opponents of immigration reform, the leaders said that “as a nation founded upon the principles of the rule of law and the centrality of family, we can no longer delay fixing this system.”

It said they are hopeful for legislation that “respects the God-given dignity of every person, protects family unity, respects the rule of law, guarantees the integrity of our national borders, ensures fairness for taxpayers, and makes it possible for undocumented immigrants who meet the requirements to become citizens if they desire.”

In a teleconference about the letter, Archbishop Wenski said: “There is more at stake in this debate than the next election. The outcome will set the tone for the rest of the century. Either we can choose to turn away from our heritage and our track record of integrating immigrants, or we can embrace it and use it to our advantage.”

Bishop DiMarzio said in the teleconference that the political debate over immigration reform often ignores the humanitarian consequences of the current system. “Families are ripped apart, migrant workers are exploited, and human beings continue to die in the desert. This suffering must end.”

While the Catholic bishops have pushed for immigration reform for decades, evangelicals have come later to the cause. Anderson and Revs. Rodriguez, Wallis and Salguero in particular, have become regular activists in efforts to rally Christians to support comprehensive reform legislation.

In the teleconference, Rev. Rodriguez said the collaboration by Catholics and evangelicals marked “a new day.”

He said it is “morally reprehensible and counter to the teachings of Christ to continue to sacrifice 11 million lives on the altar of political expediency.”

At a short Feb. 24 briefing on the prospects for reform legislation this term, Kevin Appleby, director of migration policy and public affairs for the USCCB, told participants in a conference on immigrant integration that he believes the door to passage is still open.

Appleby said he’s hopeful, despite recent comments by House Speaker John Boehner that “threw cold water” on hopes arising from the announcement a week earlier of Republican principles for reform.

Boehner “said it would be very difficult to pass,” said Appleby. “He didn’t say it was impossible.” Boehner’s rationale, that Republicans in the House didn’t trust the Obama administration to enforce the law on immigration, was weak, he said.

“The fundamentals are in our favor,” Appleby said. Among those fundamentals, he said, is that both political parties need immigration reform to pass before the next presidential election in 2016.

“The Democrats need to deliver” on promises to fix problems with the current system, he said. “And Republicans need it off the table,” lest Latino voters who turned against the party in 2012 again hold Republican candidates responsible for failure to address the problem.

PREVIOUS: Arizona governor vetoes bill, says it could have divided the state