Former prisoners rely on faith, support to get back on their feet 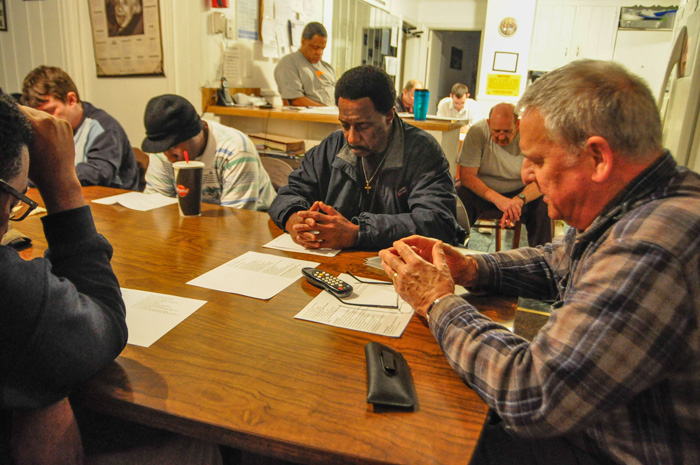 Deacon Ted Welsh, far right, of St. Joseph Parish in Madison, Tenn., leads a weekly prayer service for former prisoners who are making the transition back into society after their release. The prayer service was held at the Aphesis House, a halfway house in Madison, which several men in transition now call home. (CNS photo/Andy Telli, Tennessee Register) 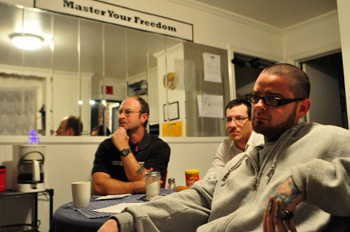 Jerry Webb, left, Jay Cody and Jesse Smith listen during a prayer service led by Deacon Ted Welsh, of St. Joseph Parish in Madison, Tenn. The deacon leads the weekly service for former prisoners who are making the transition back into society after their release. The prayer service was held at the Aphesis House, a halfway house in Madison, which several men in transition now call home. (CNS photo/Andy Telli, Tennessee Register)

NASHVILLE, Tenn. (CNS) — Being released from prison can be a daunting challenge.

Many former prisoners find themselves in unfamiliar cities with little or no money, no job, sometimes no family or friends to help. All of them carry the stigma of having spent time in prison.

“You will have in essence paid your debt to society; however, you are forever colored in as an ex-felon,” said Drew Taylor, who was released from federal prison last April and is now living in Nashville.

“The biggest challenge is to stay focused and retain hope,” he said. “And that is so difficult when it seems like everything is stacked against you,” he told the Tennessee Register, newspaper of the Diocese of Nashville.

For many, the place they try to start rebuilding their lives after prison and clearing the many obstacles they face is a halfway house.

“The goal is to give the men a legitimate shot of making it,” said Scott Pieper, executive director of the Dismas House in Nashville. Over the years, Pieper has heard many of the men who have found a temporary home at Dismas talk about the barriers they face. “We’re here for them when they do hit those challenges,” he said.

Dismas House was established in 1974 by Dominican Father Jack Hickey, a Catholic chaplain at Vanderbilt University, and a group of students involved in the Vanderbilt Prison Project. The idea was to give men just released from prison a place to live and help readjusting to society. The men would live in the same house as the students, who would provide a supportive community.

“Anxiety will raise its head. That’s when I say the Hail Mary,” said a former prisoner. “In prison, me and God got back together.”

The arrangement brought together two populations in transition, said Dan Surface, Dismas House chief executive officer. “Bringing them together, they actually served each other.”

In its 40th year, Dismas House is still operating. Currently, it has five residents, but no students in its house in Nashville’s music row. “We’re kind of in a Catch-22,” Surface said. “We want students but for every student that’s one less man we can house.”

Last fiscal year, Dismas House processed 270 applications and is a little ahead of that pace this fiscal year, Pieper said. The most it can house is eight residents at a time and most stay at least three months and some longer.

“The first thing we do for them is meet their basic needs following release: shelter, food, clothing,” said Pieper. The next step is providing case management services, figuring out everyone’s needs, what their goals are and linking them to the resources they need.

But other obstacles can be mundane things, like learning the bus system so residents can get to their appointments and jobs, Pieper said.

Some men have been in prison so long, they no longer have any of the documentation they need to get identification. Many struggle to find a job, because employers are reluctant to hire someone with a criminal record.

Charles Harrison, 68, who just served an eight-year prison term, has a master’s degree in environmental health and safety management. He had a career working for multinational oil companies and construction firms doing safety audits and safety training.

“But I’ve got two strikes against me, my age and my criminal background. Also I don’t have transportation; I have to take the bus,” he said.

What keeps former inmates like Harrison and Taylor going is their faith.

“I am hopeful,” Harrison said. “Anxiety will raise its head. That’s when I say the Hail Mary.”

Harrison was baptized Catholic, but it wasn’t until he was in prison and started attending the Catholic services led by Deacon Ted Welsh at the Lois DeBerry Special Needs Facility in Nashville, that his faith flourished. Deacon Welsh of St. Joseph Church in Madison works with inmates and former prisoners.

“In prison, me and God got back together,” Harrison said.

While Harrison was in prison, Nashville Bishop David R. Choby confirmed him, and since his release, he has become a parishioner at St. Joseph. “Anything at the church that I can participate in, I want to do that,” Harrison said. “I enjoy loving Jesus.”

Taylor became a Catholic before going to prison, and it was the help of a prison psychologist and his faith that helped him get through incarceration. “It was A) God’s grace and B) the Knights of Columbus,” Taylor said. “They sent me as much literature as I could possibly get my hands on.” And he read it all.

Taylor, a former banker, was able to find a job.

Like Harrison, Taylor became a parishioner at St. Joseph, and he has found supportive friends there, especially in Deacon Welsh and the pastor, Father Tomy Joseph, a Missionary of St. Francis de Sales.

He said the pastor has been a “wonderful confidant.”

“From Day One, he put his arms around me, didn’t judge me and has done his absolute best to encourage me and build up my faith.”

It’s that faith that has helped Taylor survive and persevere.

When former inmates run into obstacles, they have to rely on their faith to keep going, Taylor said. “It takes patience and faith. Without those two, forget it.”