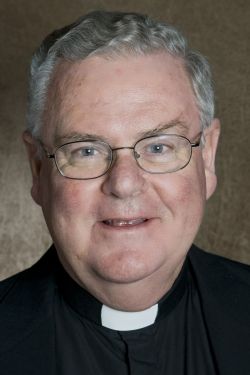 Jesuit Father Daniel J. Harrington, who died Feb. 7 at age 73, is pictured in an undated photo. Father Harrington, a longtime faculty member of Boston College’s School of Theology and Ministry, died at the Campion Center in Weston, Mass., after a four-year battle with cancer. (CNS photo/Lee Pellegrini, Boston College)

“Today, I feel like I see the Gospels through Dan’s eyes. … What I mean is that I see the Gospels with both the eyes of faith and a critical mind,” said the priest, who is editor at large of America, the Jesuits’ national magazine.

A funeral Mass for Father Harrington, 73, was celebrated the evening of Feb. 12 at St. Ignatius Church in Chestnut Hill. On Feb. 13, after a morning Mass for the Jesuit community at the Chapel of the Holy Spirit in Campion Center in Weston, his body was interred in the Jesuit Cemetery there.

Father Harrington was a scholar, author and professor of sacred Scripture at Boston College and at the Weston Jesuit School of Theology. He wrote more than 60 books on Scripture and the life and times of Jesus, illustrating his dedication to biblical scholarship.

He spent decades as the general editor of New Testament Abstracts, summarizing literature on the New Testament from hundreds of books and journals throughout the world. He also wrote “The Word” column for America magazine for three years.

The late priest, who had been a Jesuit for 50 years, took an approach to Scripture that “was sensible, moderate, scholarly, curious, just, balanced, cautious, generous but, above all, faithful,” said Father Martin.

He made the comments at a tribute held for Father Harrington last fall and published the remarks in the Feb. 8 issue of America.

“In a sense, Dan’s teaching was very much like Jesus’ use of the parables, communicating complicated truths to us in simple ways. And as with Jesus’ parables, this was a great act of charity and love,” he said, describing the impact on him of classes he took from Father Harrington at the Weston Jesuit School of Theology.

Last November, according to a news release from Boston College, Father Harrington had announced that 2013-14 was to be his final year of teaching. The university’s School of Theology and Ministry hosted a tribute to him. Family members, friends, colleagues, and current and former students attended the event; Father Martin was among a number of speakers who addressed the gathering.

A longtime faculty member at the Weston Jesuit School of Theology in Cambridge, Father Harrington — who held two degrees from Boston College — returned to his alma mater in 2008 as part of Weston’s reaffiliation with the university and joined the newly established School of Theology and Ministry.

Besides his many years of teaching, Father Harrington’s priesthood also was marked by his pastoral service. For more than 42 years, he celebrated Mass ever Sunday at St. Agnes Church in his hometown of Arlington. He also was concelebrated the noon Mass on Sundays at St. Peter’s Church in Cambridge for more than 20 years.

The Boston College news release said Father Harrington took pleasure in telling his fellow Jesuits that a parishioner once said to him, “You know I used to think you were boring until I started listening to you.”

Born in Arlington, young Daniel went to St. Agnes Grade School, where he was taught by the Sisters of St. Joseph. He won a full academic scholarship to Boston College High School, where he also played hockey and baseball. Citing his positive experience with his Jesuit teachers, he decided to enter the Society of Jesus when he graduated from high school. He was in the first class of novices to enter the Jesuit novitiate in Gloucester in 1958.

It was at Weston in the 1960s that the future Father Harrington met Jesuit Father John J. Collins, then editor of New Testament Abstracts, who enlisted his help in writing abstracts and book notices. A year after he became a priest, Father Harrington became the editor, in 1972, serving in the post until his death.

After studying philosophy, Father Harrington studied Ancient Near Eastern languages at Harvard University, where he received his doctorate. While at Harvard, he took courses at Hebrew University and the Dominican-run Ecole Biblique, the French Biblical and Archaeological School of Jerusalem.

Father Harrington completed his theological studies at Weston in 1969. He was ordained in 1971 at St. Ignatius Church. After a brief stint as professor of sacred Scripture at St. Mary of the Lake Seminary in Illinois, Father Harrington joined the faculty of Weston Jesuit School of Theology in 1972.

He is survived by his brother and sister-in-law, Edward and Marilyn Harrington of Braintree, and by several nieces, nephews, grandnieces and grandnephews.

PREVIOUS: Organizations weigh in on how Supreme Court should handle HHS mandate

NEXT: Nun, two activists go to prison for protest at nuclear weapons facility