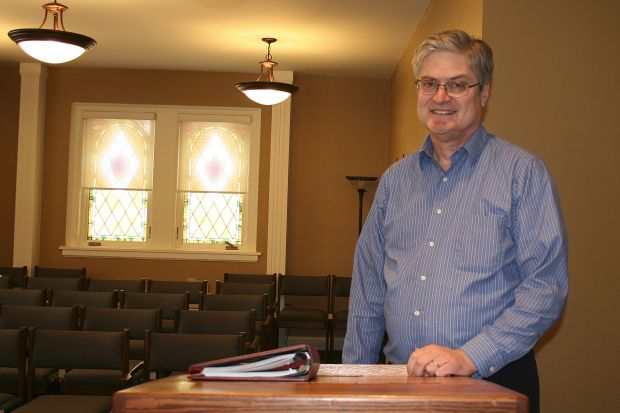 DAVENPORT, Iowa (CNS) — Chris Young will become a pioneer in the Diocese of Davenport this summer when he is ordained to the Catholic priesthood by Bishop Martin J. Amos.

Under the provision, more than 100 men have been ordained to the Catholic priesthood in U.S. dioceses since 1983.

For Young, it’s been a long, arduous process prolonged by the historic resignation of one pope and election of another.

On Feb. 3, while teaching his fifth-period religious class at Assumption High School in Davenport, he took a phone call from Father Thom Hennen, diocesan vocations director, with the good news about ordination.

Bishop Amos anticipates ordaining Young as transitional deacon before Easter and as a Catholic priest June 7, along with two other men studying to be priests for Davenport.

When Young called his wife, Jody, “she was ecstatic. … She’s so grateful to Pope Francis and to Bishop Amos that I have this opportunity,” Young told The Catholic Messenger, Davenport’s diocesan newspaper.

The pastoral provision requires she agree with her husband’s ordination as a Catholic priest.

“It’s like I’m giving him away to my church, which gives me joy,” said Jody Young, a cardiopulmonary rehabilitation nurse. “It’s a sacrifice; there’s a lot of sacrifice in this role (as a priest’s wife). But it’s a beautiful sacrifice.”

She and the couple’s three children — Colin, 23, Erin, 20, and Sarah, 19 — joined the Catholic Church in August 2005. Chris Young joined the church that December, having finished his commitments as rector of his Episcopal parish.

“We had our kids in Catholic schools. … We were drawn to the Catholic Church,” added Jody, who has been married to Chris since December 1984.

Young “certainly strikes me as a very spiritual man with a deep love for Christ and the church,” Bishop Amos said. “Because of having been a priest in the Anglican community, he certainly has pastoral experience. None of this is going to be new to him.”

Young’s pastoral experience at Episcopal parishes in California, Wisconsin and Illinois meant that he required a different sort of mentoring than seminarians, according to Father Hennen. He said he had to be mindful that Young already had been in formation, had a theological education, had been ordained and served a number of years “in the capacity of a pastor.”

Young needed to supplement his theological formation and education to move him forward comfortably to ordination in the Catholic Church.

That included studying canon law and Mariology among other subjects he was not as familiar with. Young said he completed approximately 21,000 pages of reading to prepare for his theological exams for the Catholic priesthood.

Pope Benedict XVI’s resignation and Pope Francis’ election lengthened Young’s discernment process, but Young and his wife believe they are now better prepared for Chris’ new role in the Catholic Church. As they waited to hear from Rome, Chris held down two jobs — one at Assumption and one working in supervision for John Deere Works in Davenport.

“Having been a father of small children, having been a supervisor of working people, I know I have a bigger heart for what all of God’s children go through than when I started in ordained ministry,” he said.

“I worked so hard to figure out what God wanted me to do to serve him,” he added. “I loved being a priest (in the Episcopal Church), but I needed the fullness of the historic, apostolic Catholic Church — intellectually and spiritually, in the sacraments.”