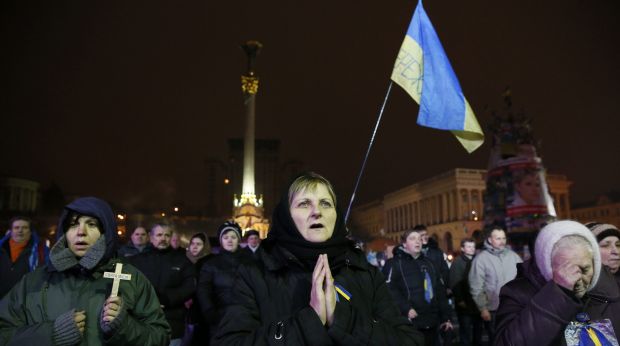 Pro-European Union protesters pray during a rally on Independence Square in Kiev, Ukraine, early Jan. 16. Since then violent clashes have escalated between police and the demonstrators, who seek stronger ties with Western Europe. The growing violence prompted the U.S. Ukrainian Catholic bishops to issue a statement Jan. 23 supporting the church in Ukraine "in this time of duress." (CNS photo/Reuters)

WASHINGTON (CNS) — Major Archbishop Sviatoslav Shevchuk of Kiev-Halych, Ukraine, head of the Ukrainian Catholic Church, capped a weeklong visit to the United States by asking all people of goodwill to join Ukrainian Catholics in prayer to resolve the ongoing political crisis in Ukraine.

Each night at 9 p.m. — 2 p.m. EST — Ukrainians pray one Our Father and one Hail Mary for the intention for a peaceful and nonviolent resolution to the crisis in Ukraine.

While in Washington, Archbishop Shevchuk met with Vice President Joe Biden, members of the House and Senate, and representatives of the State Department to give firsthand details about the crisis in his homeland.

Independence Square in Kiev has been the site of protests for nearly three months.

Archbishop Shevchuk told the U.S. leaders that human and religious rights have been violated in Ukraine. In the past few months ordinary people have been kidnapped and have vanished without a trace. Many more have been tortured.

Still others have been wounded and fearfully forgo medical attention in public hospitals as the authorities are waiting, according to Archbishop Shevchuk. Being injured or wounded is considered evidence and proof of criminal activity and thus results in arrest, prosecution and imprisonment. Some 1,000 people have been imprisoned and have been denied visitations by chaplains in order, he said, to ensure that there are no witnesses to torture or other violations of human dignity being inflicted upon Ukrainians who assembled to voice their distrust in the Ukrainian government.

The level of distrust with the Ukrainian authorities is such that no one knows what will happen after being arrested: further torture, vanishing without a trace or even death, according to the archbishop.

He shared the story of a young man who lost an eye when government forces attacked protesters. The young man sought treatment at a hospital. While at the hospital, the police arrived to arrest him. In order to avoid arrest, the man jumped out of a second-floor window.

During his visit, Archbishop Shevchuk underscored the growing economic crisis in Ukraine. The greatest impact is on the elderly who for months have not received pension checks. Now, however, teachers, doctors, nurses and others employed by the government are not getting paid regularly, either. He related how this problem then results in middle-class businesses not being able to sell any goods or services, thus compounding the economic hardships experienced by citizens and leading Ukraine to the brink of economic collapse.

Archbishop Shevchuk also cited the government’s attempt to limit the people’s relationship with God by threatening the Ukrainian Catholic Church for ministering to the faithful and all who are in need.

In November, Ukraine seemed poised to join the European Union, but President Viktor Yanukovich instead signed a similar deal with a Russian-led common market of former Soviet states. Violent clashes erupted Jan. 19 after new laws criminalized “slandering” of government officials and the wearing of masks or helmets at demonstrations.

At least two protesters were killed in clashes with riot police in subsequent protests, and peace talks got underway shortly after news of the killings grew widespread.

The Associated Press reported that protesters and police “have been maintaining a shaky truce at giant barricades near a government district in Kiev for several weeks” but activists “were ready to ready to resume confrontations with police” if Yanukovich doesn’t meet their demands.

Protesters are pushing for early elections and constitutional reforms that would reduce presidential powers. AP said about 30,000 people turned out for a rally at Independence Square Feb. 9.

While in Washington Archbishop Shevchuk also attended the Feb. 6 National Prayer Breakfast, which drew about 3,500 people from around the world.

NEXT: Pope names bishop for Albany Diocese; Rockville Centre to get auxiliary