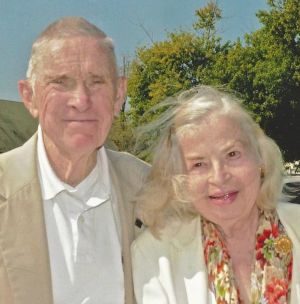 John P. Stanton, 86, who was virtually the guardian angel for the unborn and mothers with unplanned pregnancies in the Delaware Valley for almost 45 years, died Jan. 31.

Even before Roe v. Wade, the 1973 Supreme Court decision legalizing abortion in the United States, Stanton was active in the pro-life movement and remained so until the very end. He gave witness through prayer at two abortion clinics in the last week of his life.

His funeral will be held Wednesday, Feb. 5, at Immaculate Conception Church in Jenkintown where he was baptized and was a life-long member.

The youngest of the four children of Irish immigrants Dennis and Agnes (Walsh) Stanton, he attended Immaculate Conception School and upon graduation from Northeast Catholic High School he entered the U.S. Navy.

At the end of World War II and in the post-war period he served in the Philippines and Japan. Under the GI Bill he enrolled at La Salle College, where he obtained a B.A in business.

In October 1950 Stanton married Harriet Marie Althouse, his wife for the past 63 years, and together they raised 12 children.

For most of his professional career in business management he worked at Brown Instruments Division of Honeywell Corp., B & F Instruments and finally Sherman Car Wash in Palmyra, N.J., until his retirement in 1990.

His tireless witness before abortion clinics was not without sacrifice, especially in the early years when such witness was more militant and in turn was harshly suppressed by civil authorities. He endured arrests, lawsuits and even three months incarceration in the 1990s.

His organizational skills were put to good use by the movement. He founded the Pro-Life Coalition of Southeastern Pennsylvania and the state-wide Pro-Life Federation. He was co-founder of the Pro-Life Educational Foundation and treasurer for the Pennsylvania branch of National Right to Life, as well as numerous other pro-life groups. 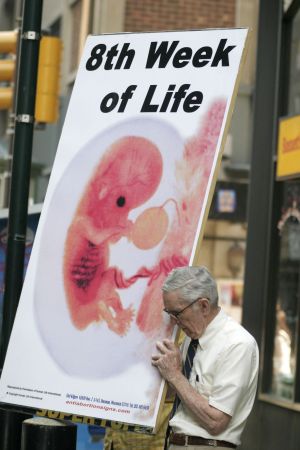 Active in his parish and the wider church, Stanton was a religious education teacher at Immaculate Conception for nearly 15 years. He earned a master’s degree in religious education from St. Charles Borromeo Seminary and taught religion classes at several high schools and Holy Family University.

Among his numerous awards was the prestigious Sourin Award from the Catholic Philopatrian Literary Institute, Hibernian Man of the Year, the Our Lady of Guadalupe Defender of Life Award; and the St. Pius the X Award for religious education.

Proud of his Irish roots, he was an expert on the life of St. Patrick, and within his family founded the Stanton Family Irish Singers, which performed at nursing homes, retirement homes and in the public square.

It was all done without malice — his last Holy Communion was offered for the conversion of one of the volunteer workers at an abortion clinic, according to his eldest son, Patrick.

Part and parcel of his work was reaching out to help the women who were desperately turning to abortion. Through the Pro-life Union financial assistance was given to Guiding Star and Our Lady’s House, two shelters for mothers. 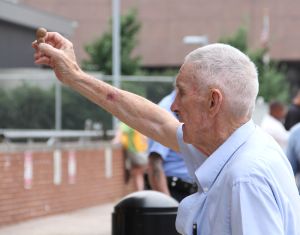 Patrick Stanton recalls one incident of a woman from Germantown who his father counseled. She already had five little children living in a terribly run-down house. John Stanton organized volunteers to completely repair the house over the course of a year.

“He saved families when he saved babies,” Patrick Stanton said.

“He had a tremendous marriage and he and my mother were soul mates. He was a perfect example of how a husband should treat his wife. He worked hard to feed us and Sunday rosary was one thing we learned from Pop.”

He equally loved his huge brood of 46 grandchildren, attending their sports or other activities and sending them long letters when they were away from home, something that was more difficult when he was the principal breadwinner for so large a family.

On the Monday before he died (Jan. 27), when he came home from a meeting Harriet wasn’t feeling well, so he helped her to bed and lay there a bit, until she fell asleep. The truth is he wasn’t feeling well either but didn’t want to alarm her.

He tried calling Patrick, but there was no answer so he drove himself to Holy Redeemer Hospital.

John discovered he’d had a massive heart attack. After treatment at Holy Redeemer he was transferred on Tuesday to the Hospital of the University of Pennsylvania. In spite of a lengthy bypass operation he started to fail.

On Friday, his last day, the family gathered around him as he was slipping away. Holding his hand they sang the songs he loved so well, “Great and Glorious St. Patrick,” “Will Ye Go Lassie Go,” “How Great Thou Art,” “Leaving of Liverpool.”

He passed away quietly in his sleep.

In addition to his wife, Harriet and son Patrick, John Stanton is survived by his sons, Joseph, Kevin, Brendan, Dennis, Francis, Cletus and Anthony; his daughters, Rosaleen, Maria Sawick and  Mary Wurtz. He was predeceased by his son, Andrew. He is also survived by 46 grandchildren and 16-great grandchildren.

His viewing will be held at Immaculate Conception Church on Tuesday, Feb. 4, from 6-9 p.m. and also on Wednesday morning from 8-10 a.m. preceding the funeral Mass. Interment will be private.

PREVIOUS: Born in Ireland, Franciscan sister served for 74 years before death at 92

NEXT: Immaculate Heart sister taught for 30 years in archdiocesan schools