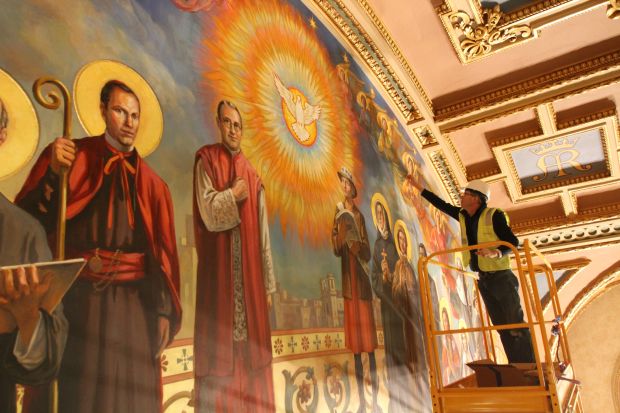 VATICAN CITY (CNS) — Three key figures in the establishment of the Catholic Church in Canada and in Brazil are likely to be declared saints before the end of the year, said a Jesuit who is helping prepare the material needed for their canonizations.

The three speeding their way toward sainthood are: Blessed Jose Anchieta, known as the Apostle of Brazil; Blessed Marie de l’Incarnation, known as the Mother of the Canadian Church; and Blessed Francois de Laval, the first bishop of Quebec.

The three were beatified together in 1980, along with now-Sts. Kateri Tekakwitha and Pedro de San Jose Betancur.

Jesuit Father Marc Lindeijer, vice postulator of sainthood causes for his order, said Pope Francis waived some of the procedures in the Brazilian and Canadian causes in response to requests from the bishops’ conferences of those countries.

Cardinal Raymundo Damasceno Assis of Aparecida, president of the Brazilian bishops’ conference, announced in December that Pope Francis had telephoned him to say he had accepted the Brazilian bishops’ request that Blessed Anchieta be canonized even though a miracle attributed to his intercession had not been identified and verified.

Usually, a miracle is needed after beatification to move a candidate to canonization. However, Pope Francis set aside that requirement when he announced he would declare Blessed John XXIII a saint, along with Blessed John Paul II, April 27.

Father Lindeijer told Catholic News Service Feb. 3 that Cardinal Angelo Amato, prefect of the Congregation for Saints’ Causes, requested the Jesuits keep the Brazilian and Canadian causes together, as they were in 1980, and compile the documentation needed for their canonizations.

The documentation is known as a “positio,” a book-sized document containing biographies of the three sainthood candidates and arguments for their canonizations based on their reputation for holiness, evidence of widespread devotion and reports of graces, favors and healings obtained through their intercession.

Usually, a positio is reviewed by at least six historians and a board of theologians appointed by the Congregation for Saints’ Causes.

But Father Lindeijer said the positio for the Brazilian and Canadians would go “directly to the prelates of the congregation — the bishops and cardinals,” who recommend causes to the pope.

“Adding the historians or theologians — it’s not like they know much more about these great people than the local bishops do,” Father Lindeijer said.

But skipping that step requires the pope’s explicit permission.

“The only one allowed to break his own laws is the pope himself. It is his corner that he is cutting,” Father Lindeijer said.

The Jesuit said the pope could sign a decree recognizing the three new saints as early as April, then set a date for their canonization.

Devotion to the two Canadians and the Brazilian “is clear. Many people receive many graces praying to them, as with John XXIII,” Father Lindeijer said. “On the basis of massive popular devotion, they will be canonized.”

PREVIOUS: Scottish Catholic agency will not have to consider same-sex adopters