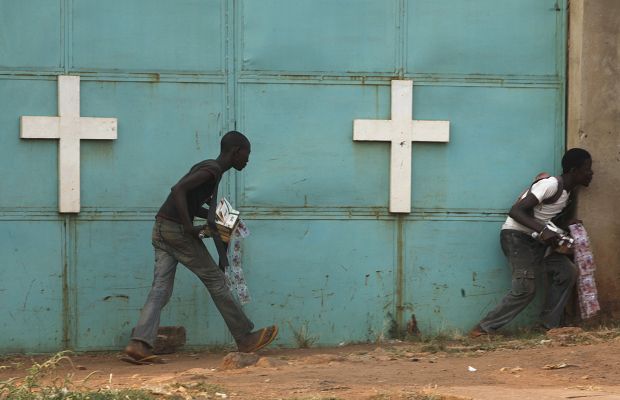 People hide from gunfire near a church during a Feb. 18 firefight between African peacekeepers and fighters from the Anti-Balaka militia in Bangui, Central African Republic. Catholic leaders in the Central African Republic praised the courage of missionary priests and nuns who remain in the country during the current conflict, despite offers of evacuation. (CNS photo/Luc Gnago, Reuters)

“But although the religious sisters have faced robbery and violence, and had their houses pillaged and shot at, I don’t think this (act of rape) has formed part of any anti-Christian strategy,” he told Catholic News Service Feb. 27 from Bangui, the capital.

The priest’s comments came after reports surfaced Feb. 21 that women religious had been raped by members of the predominantly Muslim Seleka alliance in the Bouar Diocese in the northwestern part of the country.

Msgr. Doumalo said Seleka fighters and a largely Christian militia known as Anti-Balaka were being contained by peacekeeping forces, making it easier to investigate reports of sexual assault and violence.

Father Elysee Guedjande, director of Caritas Central African Republic, said that while women religious had faced violence by armed factions, he was unaware of any rape incidents.

“Religious communities have generally been protected here, at least within their own premises, particularly in areas where French and African troops are present,” he added.

Reports of attacks on missionaries surfaced Feb. 21 from an Italian priest working in Bouar who said Seleka rebels retreating into Chad committed “looting, killings and rape.” He called for military protection of religious workers, especially in border areas.

Carmelite Father Aurelio Gazzera, Caritas director in the diocese, told Aid to the Church in Need that two European sisters and a volunteer had “only narrowly escaped” rape. He said the women asked him not to disclose their names and religious order.

In a January pastoral letter, the bishops’ conference said “robberies, rapes, pillaging, violence and killings” had been inflicted on the civilian population by Seleka members, dominated by Chadian and Sudanese mercenaries, who had destroyed the country’s administrative and economic system and disrupted its social cohesion.

Western missionary monks and nuns, mostly from the United States, France, Italy, Spain and Poland, have helped shelter many of the estimated 1 million people displaced by the violence, which erupted when Seleka forces seized power in March.

The concerns were raised as 400 French troops prepared for deployment in the violence-torn country to reinforce the 1,600-member force sent in December. They are working alongside 5,000 African peacekeepers under a United Nations mandate.

The Foreign Ministry of Poland, which has 38 missionary clergy at nine locations in the country, said Feb. 26 it believed there was “no direct threat” to the lives of foreign priests and nuns, but would maintain its “firm recommendation” that they “immediately evacuate” because of security threats.

LeAnn Hager, interim director of Catholic Relief Services in Bangui, said Feb. 27 Catholic properties, including several Caritas offices, had been looted and ransacked. She said she believed foreign sisters had not been targeted.

“Rapes and sexual violations have been used on both sides,” Hager told CNS, adding that the Catholic community generally had avoided threats and harm.

NEXT: Pope urges sympathy, outreach to couples whose marriages fail