Physical therapist sees ‘duty to give back’ to special needs children 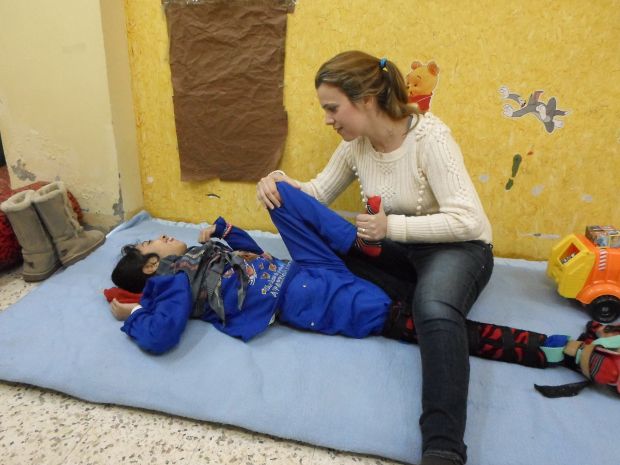 CAIRO (CNS) — In a ground floor three-room apartment in a slum in the Egyptian capital, Anna-Maria Smith sat at the feet of a 10-year-old girl with cerebral palsy, coaching her to roll left and right.

“Bravo,” Smith exclaimed when the physical therapy exercises had finished and the girl, Sandy, was beaming with pride.

“There is a better chance if they start from an early age … definitely a better chance,” said Smith. She was speaking about prospects that Sandy or any of the other dozen children with disabilities she treats will ever lead full lives in Egypt, where millions of people live on less than $1.25 a day and often have multiple family members to provide for.

“I don’t blame the parents for not always bringing their children” with special needs to get help, she said.

“They are poor … and I know they have a lot going on, that there are a lot of other kids and many other problems,” including dealing with the shame many Egyptians often associate with special needs family members, Smith told Catholic News Service.

Speaking at the makeshift center for special needs children she runs in Cairo’s Ezbat al Nakhl neighborhood, she said that, because of the center’s presence and “word of mouth” in the impoverished neighborhood, people were “slowly, slowly becoming more aware”; formerly hesitant parents and relatives had started to seek help for their children with special needs.

“Parents and other people see our center and see us when we take the children out on trips, and some ask us who we are and what we do, and we tell them,” said Smith, 32, who was born in Germany to an American mother and Italian father and has lived in Cairo since she was 8.

She said the fact that the center was free of charge, provided free meals, and that it paid transportation costs for parents to get their children to and from home helped as well.

“We have 12 (children) here now, and another 14 on the waiting list,” said Smith, adding that she’d made it a center rule to accept an equal number of Muslim and Christian children in order to foster harmony and “working together” from an early age in Egypt, where sectarian conflict has long been a problem.

Children at the center range from ages 5 to 10 and have cerebral palsy or other disorders, including hydrocephalus and sacral agenesis.

In addition to the physical and speech therapy, Montessori educational skills as well as arts and crafts activities are provided to the children at the center, five days a week, from 9 until 2, by an all-female team of four teachers, three assistants, a speech therapist and two physical therapists, including Smith.

She said growing up with a younger brother who has cerebral palsy, combined with her early Catholic education, inspired her to study physical therapy in college.

“I was lucky … I was born in a well-off family,” who could afford to take her brother for physical therapy to the United States, where treatment of the condition and other disabilities was widely available and dealt with differently, said Smith. She recalled people stopping her and her brother on Cairo streets to ask, “Does his brain work?”

In addition, she said she’d made regular visits to Egypt’s less-fortunate children in the country’s orphanages, hospitals and charities, on trips organized by the St. Charles Borromeo nuns at the Catholic German school she attended as a young girl in Cairo.

“The sisters taught us not to live in our bubble … and I learned it was my duty to give back” to society, said Smith.

After graduating in physical therapy from Egypt’s Misr University for Science and Technology in 2004, she got a paid job working at a private therapy clinic in one of Cairo’s more affluent neighborhoods. She volunteered after-hours and on her days off at different Christian charities aimed at creating awareness and caring for children with special needs in some of the city’s more depressed areas.

While she was volunteering for charities in Ezbat al Nakhl, Smith said, she sometimes came across special needs children secluded in homes, “lying on floors,” and “covered in flies,” due to parents who were either embarrassed to have them, too poor to do anything about them, or both.

“And I would wonder, is there a place for these kids? What happens to them? I had seen (in the U.S.) what happens when a (special needs) child is integrated into society … and that it didn’t have to be this way,” Smith said.

The funding she needed to open a center for children with cerebral palsy and other disabilities presented itself in a tragic way in 2011, with the death of Nathalie Atalla, Smith’s closest friend since the time the two had met as children at the Catholic German school.

Atalla’s grieving friends and relatives wanted to donate money to start a charity in her name, and her mother contacted Smith, who used the donations to start the center she named the “Nathalie Day Care Center for Special Needs Children.”

In light of Egypt’s newly adopted constitution, which promises unprecedented rights to the country’s estimated 17 million people with special needs, Smith said center staffers were looking forward to the day that at least some of the children could go on to lead regular lives and attend government schools.

“I really hope some will make it,” said Smith, while acknowledging many would probably not.

She said two of her biggest challenges remained the center’s limited budget of about $860 per month and convincing parents how important it was to show they were proud of their special needs children, no matter what, and for even the simplest of accomplishments.

Sometimes, she said, “the children are so happy, even just to show they can hold a spoon.”