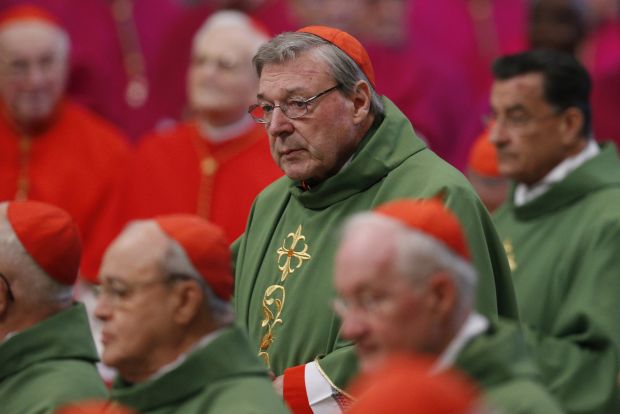 VATICAN CITY (CNS) — In a move reflecting both his drive to reform the Vatican bureaucracy and his oft-stated desire to include laypeople in the leadership of the church, Pope Francis established a new panel, to include almost as many lay members as clerics, to oversee the finances of the Holy See and Vatican City State.

Another new office, to be headed by Cardinal George Pell of Sydney, will implement the panel’s policies.

The Vatican announced the changes in a statement Feb. 24, explaining they would “enable more formal involvement of senior and experienced experts in financial administration, planning and reporting, and will ensure better use of resources,” particularly for “our works with the poor and marginalized.”

The Council for the Economy will include “eight cardinals and bishops to reflect the universality of the church” and “seven lay experts of different nationalities with strong professional financial experience,” the Vatican said. They will “meet on a regular basis and to consider policies and practices and to prepare and analyze reports on the economic-administrative activities of the Holy See.”

The lay members of the new council will exercise an unprecedented level of responsibility for non-clerics in the Vatican, where the highest offices have always been reserved for cardinals and bishops. The Vatican did not release any names of council members.

Reporting to the council will be the new Secretariat for the Economy, which will exercise “authority over all the economic and administrative activities within the Holy See and the Vatican City State,” including budget making, financial planning, hiring, procurement and the preparation of detailed financial statements.

“I have always recognized the need for the church to be guided by experts in this area and will be pleased to be working with the members of the new Council for the Economy as we approach these tasks,” Cardinal Pell said in a statement released by the Archdiocese of Sydney, which said he would take up his new position at the Vatican “by the end of March.”

Cardinal Pell is a “man who’s got financial things at his fingertips, and he’s a man who’s very decisive, and I think he’s a got a good understanding of how Roman affairs work,” South African Cardinal Wilfred F. Napier of Durban, who sat on one of the advisory panels that reviewed the arrangements before the pope’s decision, told Catholic News Service.

Pope Francis established the council and the secretariat with an apostolic letter given “motu proprio” (on his own initiative), dated Feb. 24, with the title “Fidelis dispensator et prudens” (“Faithful and prudent steward”), a quotation from the Gospel according to St. Luke. The same letter provides for the appointment of an auditor general, “who will be empowered to conduct audits of any agency of the Holy See and Vatican City State at any time.”

The motu proprio makes no mention of the Institute for the Works of Religion, commonly known as the Vatican bank.

The pope acted on recommendations from the Pontifical Commission for Reference on the Economic-Administrative Structure of the Holy See, which he established in July to review accounting practices in Vatican offices and devise strategies for greater fiscal responsibility and transparency.

According to the Vatican, the commission “recommended changes to simplify and consolidate existing management structures and improve coordination and oversight across” the Vatican bureaucracy, and called for a “more formal commitment to adopting accounting standards and generally accepted financial management and reporting practices as well as enhanced internal controls, transparency and governance.”

The recommendations were “considered and endorsed” by the pope’s eight-member advisory Council of Cardinals, which met for its third session Feb. 17-19, and the 15-member Council of Cardinals for the Study of the Organizational and Economic Problems of the Holy See, which met for the last time Feb. 24, since it ceased to exist upon the establishment of the new council.

According to Cardinal Napier, a member of the defunct council, at least some of the prelates on the new panel will be drawn from the former 15-member body.

“Something really to be needed to be done,” Cardinal Napier said of the pope’s actions. “For instance, there was no serious budgeting that you could call budgeting. … It was quite clear that some of the procedures and processes that were in place were not adequate for today’s world.”

The conclave that elected Pope Francis in March 2013 took place amid controversy provoked by the previous year’s “VatiLeaks” of confidential correspondence sensationally documenting corruption and incompetence in various parts of the Vatican bureaucracy.

Among other measures in his first year, Pope Francis established a special commission to investigate the Vatican bank, expanded the scope and enforcement of Vatican City laws against money laundering and the financing of terrorism, and set in motion an overhaul of the church’s central administration, the Roman Curia.