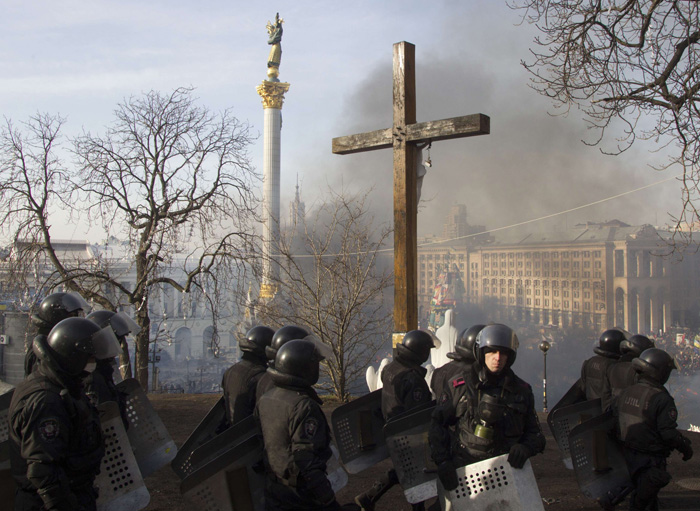 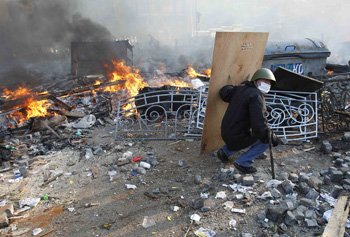 An anti-government protester takes cover behind a shield during a rally in Independence Square in central Kiev, Ukraine, Feb. 19. (CNS photo/David Mdzinarishvili, Reuters)

VATICAN CITY (CNS) — After a night of violent confrontations between protesters and police and the deaths of more than two dozen people, Pope Francis and Ukrainian church leaders called Feb. 19 for an end to all violence and a serious commitment to dialogue for the good of Ukraine.

“With a troubled heart I am following what is happening in Kiev,” Pope Francis said at the end of his weekly general audience.

“I assure the Ukrainian people of my closeness and I pray for the victims of the violence, for their families and for the injured,” he said.

“I call on all sides to stop every violent action and seek agreement and peace,” he added.

In Kiev, Archbishop Sviatoslav Shevchuk, major archbishop of the Ukrainian Catholic Church, stressed “that those holding power bear full responsibility for what is happening in our country.”

“In the name of God, we condemn violence, ruthlessness and the ignoring of human rights and the will of the nation,” he said Feb. 19 as the United Nations and Western governments demanded an urgent resumption of government-opposition talks.

“I state with great sorrow that calls by the churches to stop the shedding of blood and seek a peaceful settlement of this conflict have not been heard,” the archbishop said, adding that he had asked Catholics to fast and pray for peace and asked Catholic churches to ring their bells in rejection of “fratricidal evil.”

Some churches near the protests were being used as makeshift hospitals. A Feb. 19 report in National Review Online said Ukrainian Catholic Bishop Borys Gudziak read Archbishop Shevchuk’s statement in Kiev’s Independence Square, then went to visit the ophthalmology unit of a nearby hospital to give the sacrament of the sick to protesters who had their eyes shot out by rubber bullets.

“These people are fighting not just for themselves, but for all of us, even those who are beating them — for the future of their children, that they may live in a different state,” said Auxiliary Bishop Stanislav Szyrokoradiuk of Kiev.

Meanwhile, a bishop from Ukraine’s smaller Latin-rite Catholic church accused the government of President Viktor Yanukovych of “doing nothing to calm people’s grievances,” and also called on Catholics to “pray for the fallen and those still fighting.”

“These people are fighting not just for themselves, but for all of us, even those who are beating them — for the future of their children, that they may live in a different state,” Auxiliary Bishop Stanislav Szyrokoradiuk of Kiev told Ukraine’s Catholic Credo magazine Feb. 19.

“They are beating them for this, which is why we should pray for them and hope God grants us comfort. We know good will always triumph,” he said.

Prolonged violence erupted Feb. 18 when members of the Ukrainian Parliament blocked opposition attempts to scale back Yanukovych’s powers, and police resumed attempts to clear a protest camp from central Kiev’s Maidan, or Independence Square. Last November, protesters occupied the square after Yanukovych’s withdrawal from a landmark deal with the European Union.

In a Feb. 19 TV statement after failed overnight talks, Yanukovych said opposition leaders had “disregarded the principle of democracy” and “crossed a line by calling for people to take up arms.”

However, news agencies said at least 5,000 demonstrators remained in Independence Square, adding that government buildings had been reoccupied in Lviv and other Ukrainian cities.

One Kiev priest, who identified himself as Father Matthew, told Catholic News Service Feb. 19 that armed Ukrainian riot police had burned a chapel, set up in the square in December by Ukrainian Catholic clergy, and had attempted to beat open the doors of the Latin Catholic cathedral to arrest injured demonstrators.

Father Matthew said one man had been shot dead by police Feb. 18 outside the cathedral, adding that many Ukrainians believed Russian special forces had been deployed in Kiev to help quell the unrest.

He said his own car had been searched by troops with Kalashnikov rifles as he arrived for Mass, to ensure he was not “bringing food or medicines for protesters.”

“People are shocked and frightened — we’re now hoping they’ll respect holy places and won’t try to break into our churches,” Father Matthew said. “Since the attack on the square began, our own cathedral has been full of bleeding people, mostly hit by rubber bullets but probably by live rounds as well.”

In a Feb. 19 statement of support, Lithuania’s Catholic bishops noted that, in Ukraine, “TV channels are shut down; ultimatum-style demands are voiced. The desire of the Ukrainian people to live in a free country faces attempts of suppression by military force, while nobody listens to the will of the people and their aspirations.”

Recalling their country’s break from the Soviet Union in the late 1980s and early 1990s, “helps us to understand even better those dramatic hours, lived out by the people of Ukraine,” the Lithuanians said.

“We appeal to all the faithful of Lithuania, asking them to unite with the Ukrainian Christians and pray for peace and reconciliation in Ukraine, and to remember the dead and the suffering during the Mass. Let the Christian solidarity and prayer ease the pain and lead toward the peace,” the bishops said.

Contributing to this story were Cindy Wooden at the Vatican, Jonathan Luxmoore in Poland and Ruta Tumenaite in Lithuania. 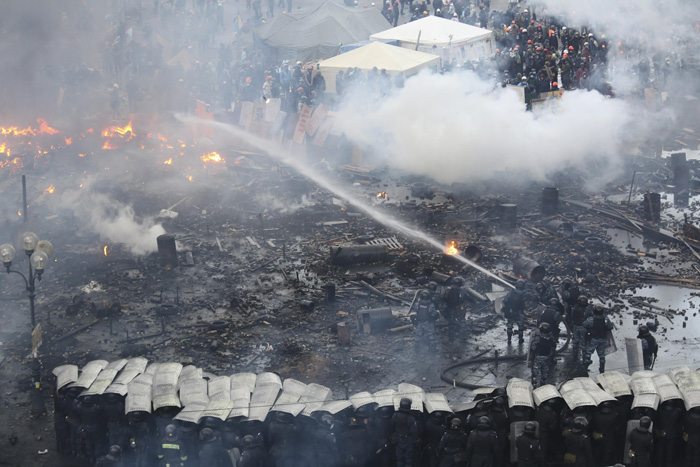 Riot police stand in formation as their colleagues attempt to extinguish a fire during clashes with anti-government protesters in Independence Square in Kiev, Ukraine, Feb. 19. (CNS photo/Olga Yakimovich, Reuters)