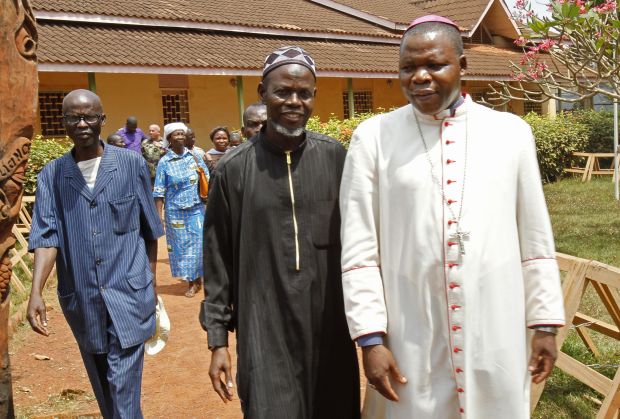 OXFORD, England (CNS) — Church leaders in the Central African Republic reiterated that the media is wrong in reporting a “religious war” in their country and insisted Christians and Muslims are working together in government and society to secure peace.

“We and other faith leaders have repeatedly urged the international press and peacekeeping forces not to present the violence this way,” said Msgr. Cyriaque Gbate Doumalo, secretary-general of the Catholic bishops’ conference.

“This isn’t a religious conflict, but a military and political one. Of course, it could acquire a religious dimension if it’s instrumentalized this way. But it’s completely false to imply religious leaders have played some part in it,” he told Catholic News Service Feb. 11.

Msgr. Doumalo told CNS fighting appeared to have died down between remnants of the predominantly Muslim rebel Seleka alliance, which seized power in March 2013, and a largely Christian militia known as Anti-Balaka.

He also said French and African peacekeeping forces had asked Catholic, Protestant and Muslim leaders to help mobilize support for their mission.

“The population is ready to help them, although there’s also been some complacency in the disarmament process so far,” Msgr. Doumalo said. “In some districts, there’s been no disarmament at all, and we now need definitive steps to neutralize the Seleka and Anti-Balaka militias, as well as to remove weapons from the many civilians who’ve acquired them.”

At a joint Feb. 7 news conference, Archbishop Dieudonne Nzapalainga of Bangui and the city’s chief imam, Omar Kobine Layama, said attempts were being made to “impose a religious war on people who have always lived in harmony,” adding that there was “no reason to drag religion into a purely political conflict.”

They said greater “financial and material means” were needed to secure the country and urged the United Nations to send more peacekeeping troops as well as judicial investigators “so justice can be done.”

Msgr. Doumalo said Imam Layama had been sleeping at Archbishop Nzapalainga’s residence since late 2013, after receiving threats from Seleka.

He added that a grenade had recently been lobbed into Bangui’s St. Michael’s Church, badly injuring several worshippers, but that the archbishop had asked Catholics to “greet and ask forgiveness from Muslim brethren.”

“Although many see the Muslim population as Seleka’s accomplices, we’ve continually urged against this in our churches,” Msgr. Doumalo said.

“Politicians are still trying to use this conflict’s religious connotations. But we have to tell the truth if we’re to build reconciliation.”

Aid agencies said a resurgence in violence and looting had left around a dozen dead in the capital Feb. 8-9. A Rwandan peacekeeping commander said Feb. 10 his troops had fired on a Christian mob when it attacked and killed Muslim civilians in Bangui.

The emergency director of Human Rights Watch, Peter Bouckaert, told the BBC World Service Feb. 10 “entire neighborhoods” had been “emptied of their Muslim population,” adding that the reported exodus of an estimated 50,000 Muslims could severely affect the Central African economy.

Msgr. Doumalo told CNS that most Muslims fleeing the country were from neighboring Chad and Sudan, whose nationals had dominated Seleka.

He also said that “although Anti-Balaka rose up in exasperation at what Seleka was doing, it isn’t a Christian militia. Nor are all Muslims on the side of Seleka.”