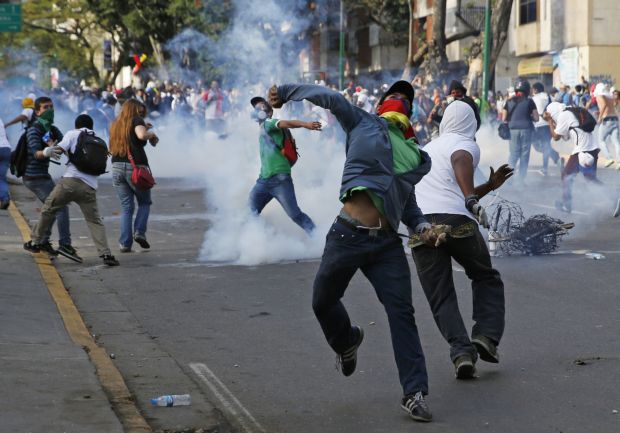 LIMA, Peru (CNS) — As protests in Venezuela continued, with flare-ups of violence, the country’s Catholic leaders urged dialogue and respect for the demonstrators’ human rights.

“We have called for the social and political leaders to engage in deep, sincere dialogue” to address the country’s serious problems, including high rates of violent crime and economic difficulties that have caused a scarcity of some basic consumer goods, Caracas Auxiliary Bishop Jesus Gonzalez de Zarate, secretary-general of the Venezuelan bishops’ conference, told Catholic News Service in a telephone interview.

Nearly two weeks of demonstrations by opponents and supporters of the government of President Nicolas Maduro left at least six people confirmed dead, according to the commission, although government officials put the toll at 13.

More than 530 people were arrested, according to the statement provided to CNS by Janeth Marquez, who heads the church’s social ministry office in Caracas, Venezuela. Government officials said most of those arrested had been released.

One of the detainees was Leopoldo Lopez, one of the more radical opposition leaders, who turned himself in Feb. 18 after government officials accused him of inciting violence and ordered him arrested.

Eighteen cases of torture and one rape also have been reported, according to the human rights groups’ statement.

The groups expressed concern about paramilitary groups allegedly aligned with the government, which have clashed with protesters, as well as about threats against and attacks on journalists and human rights defenders.

The justice and peace commission and other groups called for “the national and international community to question the human rights violations, demand action for an independent investigation, ask for an end to the crackdown and promote genuine dialogue.”

Opposition leader Henrique Capriles, who lost the 2013 presidential election to Maduro, had said he would talk with Maduro at a meeting of government officials Feb. 24, but later decided to skip the meeting.

He has suggested that the church serve as mediator in talks between the government and the opposition. Bishop Gonzalez de Zarate said church leaders were open to the idea and that they had met Feb. 13 and 14 with student leaders from both sides.

Nevertheless, the bishop said, both sides would have to have an “authentic willingness to dialogue” and agree on an agenda of issues to be addressed.

Crucial concerns for Venezuelans, which underlie the protests, include the lack of public security, health care, quality education and “a social and political vision of the country,” he said.

The demonstrations began in San Cristobal, capital of the western state of Tachira, in early February, when an attempted rape prompted students to protest the lack of public security. They spread to other parts of the country, including Caracas, and turned violent on Feb. 12, Venezuela’s Youth Day.

San Cristobal, near the Colombian border, remained the scene of some of the fiercest demonstrations and crackdowns on protesters, and a large number of military troops have been sent to the town, Bishop Gonzalez de Zarate said.

On Feb. 14, Bishop Mario del Valle Moronta Rodriguez of San Cristobal urged dialogue and an end to the violence.

“In the name of the Lord Jesus, we call for an end to violence of all kinds — verbal, aggression, crackdowns — and we seek to show that we are ‘people of peace,'” he wrote in a message. “We deplore the deaths that have occurred during protests in various places in the country, as well as the fact that many people have been injured. We ask that those who have caused these deaths and personal harm accept responsibility and be punished according to the law.”

The bishop also called for “political, social, economic and student leaders to meet and share ideas and opinions in a quest for consensus and a path of peace for all.”

NEXT: Ukrainian archbishop sees lingering threat of war, but signs of hope