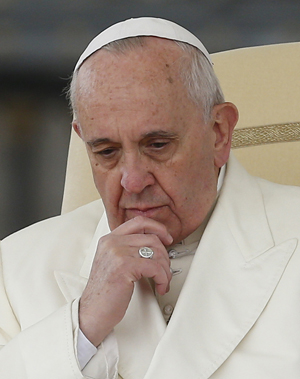 VATICAN CITY (CNS) — Don’t be too lax or too harsh during confession and always make sure people know when the sacrament of reconciliation is available, Pope Francis said.

“Let’s not forget that the faithful often struggle to take part in the sacrament, both for practical reasons and because of the natural difficulty in confessing one’s own sins to another person,” he said March 28.

“For that reason we have to work really hard on who we are, on our humanity, so as to never be an obstacle, but to always help people be drawn to mercy and forgiveness,” he told confessors and other participants attending a course sponsored by the Apostolic Penitentiary, a Vatican court that handles issues related to the absolution of sin.

The pope thanked the court for its work in helping form “good confessors” who are aware of how important their ministry is.

The power to forgive sins comes from the Holy Spirit, therefore, priests must be “men of the Holy Spirit” who are both tender and strong as they give witness and proclaim the new life offered by the Lord’s resurrection, the pope said.

“Mercy is the heart of the Gospel. It’s the good news that God loves us, that he always loves sinful humanity and, with this love, he attracts people to him and invites them to conversion.”

“This witness is read on the face, you hear it in the voice of the priest” who administers the sacrament of reconciliation, he added.

Because the way the priest speaks and reacts is important, he must welcome penitents, “not with the attitude of a judge and not like a simple friend, but with the charity of God, with the love of a father who sees his son returning and then heads his way, like the shepherd who has found his lost sheep.”

“Mercy is the heart of the Gospel. It’s the good news that God loves us, that he always loves sinful humanity and, with this love, he attracts people to him and invites them to conversion.”

During confession, priests need to avoid the two opposite extremes of being too strict and too lax, the pope said. “Neither of the two does good” or helps the penitent, he said.

“Mercy truly listens with the heart of God and wants to accompany the soul along the road of reconciliation.

“Confession is not a prosecuting court but an experience of forgiveness and mercy,” the pope said.

A priest’s heart should find itself easily moved, he said, “not out of sentimentalism or mere emotion,” but because he has the Lord’s mercy in his “guts.” A confessor has the dual role of a doctor who heals and a judge who absolves, he added.

Priests must offer lots of quality time to the sacrament of reconciliation, he said. A priest who does not spend time tending to his lost sheep “is like a father who forgets about his lost child and neglects waiting for him,” the pope said.

For that reason, it is important to clear away the many difficulties often associated with confession, which is “an immense gift” the Lord gave his church, he said.

“It’s very important that every diocese and parish community take particular care in celebrating this sacrament of forgiveness and salvation.”

A top priority is for every parish to let people know when they can find a priest, the pope said. Churches run by religious communities should especially be able to guarantee “a constant presence of confessors,” he added.

PREVIOUS: Only way to know how much God loves you is to give him a try, pope says

NEXT: Readings of the holy Mass – Fourth Sunday of Lent