Pope Francis: Humility and prayer needed to hear the word of God 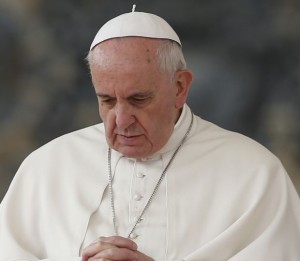 VATICAN CITY (CNS) — Anyone who desires to hear the word of God must first be humble and then capable of prayer, Pope Francis said March 21 during his early morning Mass in the Domus Sanctae Marthae, where he lives. Without humility and prayer, people take possession of God’s word and turn it to their own uses, said the pope.

Pope Francis’s homily was based upon a parable Jesus recounts in the Gospel of Matthew, in which a landowner loses his vineyard to thieves who kill his servants and son.

Jesus then interprets the parable for the chief priests and elders whom he is addressing: “The kingdom of God will be taken away from you and given to a people that will produce its fruit.”

The same happens among ourselves when we are not open to and obedient to the word of God, said the pope, according to a report by Vatican Radio.

In this way, the pope continued, the word of God itself becomes as if dead. The Holy Spirit becomes a prisoner of the desires of those who would take the word of God as their own, according to their interests, their ideologies, their theologies.

“This is the drama of such people, but also our own,” Pope Francis said. “To preserve this, they kill. This is what happened to Jesus.

“But there is a phrase which gives us hope,” said Pope Francis. “The word of God may be dead in the hearts of people like this, and can die even in our own hearts. But it does not end because it is alive in the hearts of the simple and the humble, of the people of God.

“The simple flock that followed Jesus because what Jesus said was heartwarming,” the pope said, “did not use the word of God in their own interest; but listened and tried to be a little bit better.”

What can each of us do so as not to “kill” the word of God, and not imprison the Holy Spirit? the pope asked. “Two simple things — first, humility, secondly, prayer.”

PREVIOUS: God gives the water we need for eternal life

NEXT: A must-see film for the Lenten season