Ukrainians in U.S. angry over ‘trampling of freedoms in Ukraine,’ says archbishop 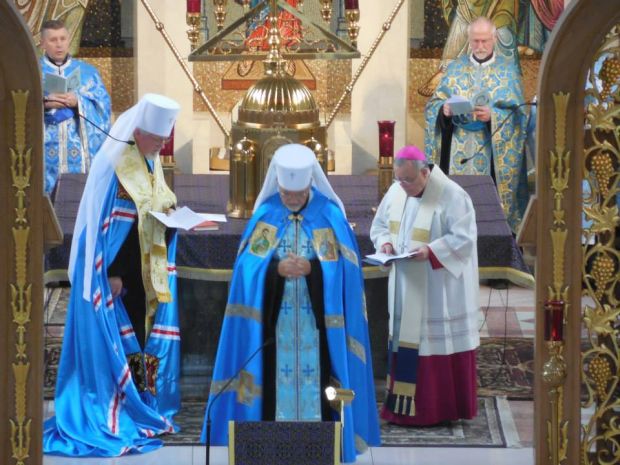 PHILADELPHIA (CNS) — Ukrainians in the United States have replaced “hope and excitement” for their country — after its 1991 independence — with “great sadness and worry,” said Ukrainian Archbishop Stefan Soroka of Philadelphia.

“Confusion and anger have overtaken our hearts and minds as we have witnessed the callous trampling of people’s rights and freedoms in Ukraine,” the archbishop said during a March 16 prayer service for peace in that nation held at Philadelphia’s Ukrainian Catholic Cathedral of the Immaculate Conception.

The archbishop was joined by Philadelphia Archbishop Charles J. Chaput and Archbishop Antony, head of the Ukrainian Orthodox Church of the U.S.A., based in South Bound Brook, N.J., as well as about 30 priests and 500 congregants in praying for protection of the people of Ukraine.

“We remember the souls of those who have lost their lives and others who have suffered severe beatings in the struggle for freedom,” Archbishop Soroka said.

He said the country is “being subjugated to oppressive and controlling authorities, characteristic of communist times” and added that the country is being divided by force and intimidation.

“We all are worried for the safety of our families and for the future of Ukraine. We are saddened by their sufferings. We share in their feelings of great uncertainty as to their future,” the Ukrainian Catholic archbishop said.

He urged the congregation to ask Mary for her intercession recognizing that “she is our hope and comfort in our sorrow for Ukraine.”

Archbishop Chaput noted that the traditions for Ukrainian Catholics and Latin-rite Catholics may be different but he said “each tradition is equally rich, equally important, and the Catholic faith we both share is one and the same. In the end, we’re one church and one people of God.”

He stressed that Catholics of the Latin-rite Archdiocese of Philadelphia are praying for Ukrainians in a special way. He also said that many people “admire the leadership of your church here in Philadelphia and in Ukraine for standing up for the Gospel of Jesus Christ, for democratic government and for the dignity of the human person. Thank you for your courage. God bless you for your witness. And please know that all of you will remain in my prayers,” he said.

Archbishop Antony noted that the Ukrainians have lived through “cataclysm after cataclysm” and urged the congregation to continue to pray for Ukraine particularly during Lent.

“Pray for our people. Pray for those who have the audacity to stand up and say, we have rights, there is dignity in humanity, there is a sanctity of life, that we will die for in order to preserve the future for our children.”

After the service, Andrew Fylypovych, who has relatives in Ukraine, told CBS News that the situation there is “absolutely unbelievable.”

“The propaganda that the Russians are trying to pull over on the world is remarkable. Calling Ukrainians as being oppressors of Russians is absolute nonsense. Ukraine simply wants to exist on its own, be friendly with everybody, and live a normal life,” he said.

Pope Francis met privately at the Vatican with the head of the Ukrainian Catholic Church March 17, the day after pro-Russian voters on the Crimean peninsula voted to secede from Ukraine in a referendum the United States and European Union called illegal.

NEXT: Mass precedes festive parade in honor of St. Patrick