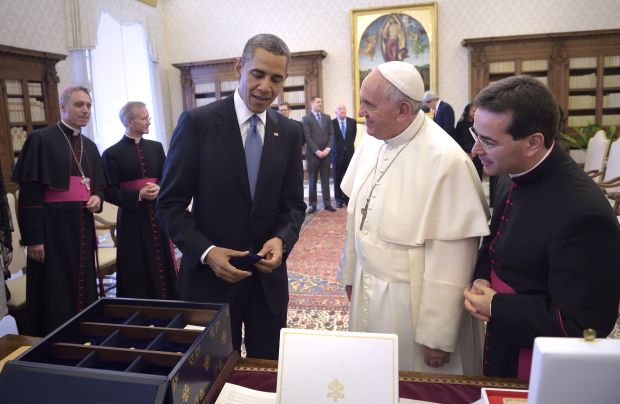 BALTIMORE (CNS) — The use of wood from Baltimore’s basilica to construct a “seed chest” President Barack Obama gave to Pope Francis March 27 points to the history of American Catholicism and Baltimore’s role in it, said Msgr. Arthur Valenzano, rector of the Basilica of the National Shrine of the Assumption of the Blessed Virgin Mary.

“I’m very pleased,” Msgr. Valenzano said of the gift. “It gives us another chance to get the word out nationally, and now internationally, about the role that the basilica played and continues to play in the United States.”

Robert S. Reier, the basilica’s operations manager, collected about three pounds of wood at the request of the U.S. State Department in early March. It was salvaged from mahogany pews that once stood in the sisters’ gallery, where Carmelites attended Mass behind a drawn curtain.

Obama presented the box to the pope at the Vatican. It was the leaders’ first meeting.

Described by the White House as a “custom-made seed chest” constructed of American leather and the basilica wood, the box held a variety of fruit and vegetable seeds used in the White House garden.

The gift was inspired by the pope’s recent announcement that he would open the gardens of the papal summer residence at Castel Gandolfo to the public. An inscription on the chest reads: “Presented to His Holiness Pope Francis by Barack Obama, President of the United States of America, March 27, 2014.”

According to the White House, Monticello, Thomas Jefferson’s Virginia estate, will also donate to a charity of the pope’s choice seeds “that will yield several tons of produce.”

The basilica was America’s first Catholic cathedral, and continues to operate as a co-cathedral for the Archdiocese of Baltimore. Its cornerstone was laid in 1806 by Archbishop John Carroll, the first Catholic bishop in the United States and a cousin of Charles Carroll, a signer of the Declaration of Independence.

The basilica was designed by architect Benjamin Latrobe, an architect of the Capitol who had a prominent role in the design and construction of the U.S. Capitol. The basilica is considered the best surviving example of Latrobe’s work and one of the finest examples of neo-classical architecture in the world.

The wood, old-growth mahogany, dates to about 1906, Reier said, during the episcopacy of Cardinal James Gibbons, an ardent patriot. It was taken from the oldest pews the basilica had, he said.

“There actually is older wood in the church, but we’re not going to take down beams,” he said with a laugh.

The basilica previously used the pews’ mahogany to construct altars for the undercroft’s adoration chapel and the Lady Chapel.

“The fact that now a piece of this history has been presented to the Holy Father, that again is just another indication of how important this cathedral is to this country,” Reier told The Catholic Review, Baltimore’s archdiocesan newspaper.

The wood also points to the basilica as a symbol of religious liberty, Msgr. Valenzano said. “It’s a witness to what we believe,” he said.

Pope Francis’ meeting with the president comes at a time when the Obama administration is under fire from U.S. Catholics over a Department of Health and Human Services mandate requiring most employers to pay for contraceptives, sterilization and abortion-causing drugs as part of the Affordable Care Act. The U.S. Conference of Catholic Bishops is fighting the mandate, and Catholic institutions across the country, including the Archdiocese of Baltimore, have sued the federal government on the grounds the mandate violates their religious freedom.

Archbishop William E. Lori of Baltimore is head of the U.S. bishops’ Ad Hoc Committee for Religious Liberty. For two consecutive years, he has presided at the basilica during the opening Mass for the Fortnight for Freedom, two weeks of nationwide prayer for religious liberty.

Asked if the gift was ironic, given the clash over religious liberty between the president and the U.S. bishops, Monsignor Valenzano laughed and said, “I don’t know.”

“It’s timely now, because of the challenges to religious liberty,” he said.

NEXT: Meetings of U.S. presidents and popes: long, but not ancient, tradition