Cardinal George out of hospital, is receiving antibiotics for infection 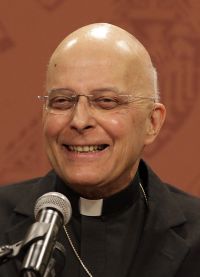 CHICAGO (CNS) — Chicago Cardinal Francis E. George was released from Loyola University Medical Center in Maywood the afternoon of March 21, according to a press release from the archdiocese.

He went to Loyola March 14 for a regular checkup on his chemotherapy treatment and was hospitalized later that day for flulike symptoms and dehydration.

He received intravenous fluids and is receiving antibiotics for an infection his doctors identified.

Cardinal George, 77, will resume his chemotherapy when his doctors feel it is appropriate and will continue to maintain his administrative and public schedule.

“The cardinal is grateful to those who are praying for him and for the good wishes expressed by so many,” the release said.

His medical team recommended the course of treatment based on the results of several recent tests.

The cardinal was diagnosed with urothelial cancer in August 2012 and underwent chemotherapy at that time. The cancer, dormant for well over a year, is still confined to the area of his right kidney.

PREVIOUS: Harrisburg bishop holds up St. Joseph as ‘challenging example’ for all