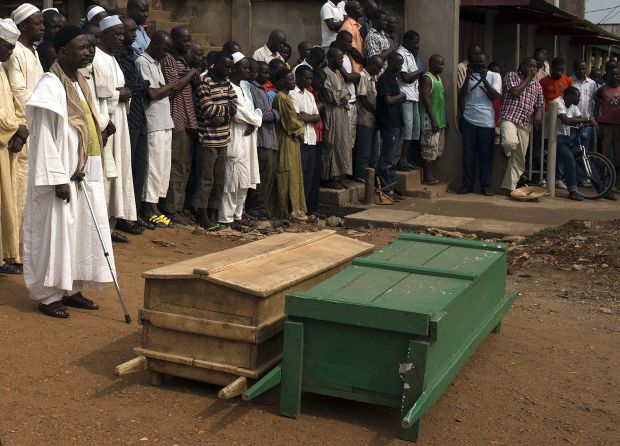 WASHINGTON (CNS) — The Quran, Islam’s holy book, indicates that when a Muslim is in trouble, he should go to Christians, because they are also children of God, so Imam Omar Kobine Layama fled to the house of a Catholic archbishop.

“His arrival was very emotional because he arrived with only one small bag in his hand,” Archbishop Dieudonne Nzapalainga of Bangui, Central African Republic, told Catholic News Service of his friend’s arrival Dec. 5. “When he left his house, he knew he would find a friend where he arrived.”

Archbishop Nzapalainga’s parish is one of several Catholic churches to house displaced citizens of different faiths during the conflicts in Central African Republic. The archbishop and other religious leaders are hoping to mend the relations between Muslims and Christians, which have been crippled by recent rebel attacks.

“Our house, in reality, is God’s house,” Archbishop Nzapalainga told Catholic News Service in Washington in March during a visit with two other religious leaders. “When I open my doors to receive a brother, I am doing what God asks me to do.”

In March 2013, a rebel group known as Seleka, which includes many Muslims from the neighboring countries of Chad and Sudan, overthrew the capital, causing the president to flee.

In revenge, the Anti-Balaka, often portrayed by the media as Christian militias reactivated in response to Muslim rule, increased attacks on Seleka members. Thousands have died in violent attacks by both groups.

Even though the conflict isn’t based solely on religion, it has separated many interfaith families, and Muslims have been forced out of their homes.

The United Nations estimated that, by early March, 650,000 people had been displaced within Central African Republic, and another 312,000 were refugees in neighboring countries. The UNHCR warned of increasing threat to the situation because of the rainy season, which begins in April.

The Rev. Nicolas Guerekoyame-Gbangou, who accompanied Archbishop Nzapalainga and Imam Layama to the United States, has also accepted people of various faiths into his church. He has not only received Muslims but also people of the Baha’i faith.

“The temptation is always to consider them as people — as new sheep — to be converted,” Rev. Guerekoyame-Gbangou told CNS. “At no moment did I ever obligate people or require people to come and pray with me.”

Rev. Guerekoyame-Gbangou said he allows the refugees to pray however they wish.

He shared a story about a Baha’i woman who came to comfort him when his first daughter died. She prayed for him, and it was his first experience hearing a prayer of the Baha’i faith.

“I’m a pastor. I could have said no, and I very willingly prayed with her,” Rev. Guerekoyame-Gbangou said. “That is a moment that God gave to us to enrich each other — to cultivate human solidarity.”

Because of the kindness and acceptance shown to him, Imam Layama said his role now as a Muslim leader is to talk to his people and calm the hatred and violence that exists against Christians.

“This is the commitment that I have made to my brothers (and) religious leaders,” Imam Layama said. “(It’s) why we’re here as well together in the United States.”

In their visit to Washington, the three religious leaders expressed the need for U.S. involvement in Central African Republic.

The U.S. has the resources to help “rebuild the peace that used to exist,” Archbishop Nzapalainga said.

“The United States can help us defend the poor, defend the abandoned, defend and protect refugees,” he said.

In December, a U.N. Security Council resolution established MISCA, the African-led International Support Mission to the Central African Republic. MISCA is a French-backed peacekeeping force of some 6,000 members, led by the African Union.

France also deployed about 2,000 troops to Central African Republic in an attempt to help.

“The presence of the French troops … and the MISCA troops has done good work,” Archbishop Nzapalainga said. “They have saved people’s lives, but there is so much more that needs to be done.”

He said the French and MISCA troops cannot even control the violence within the city of Bangui, the capital and largest city, let alone the whole country, which is nearly the size of Texas.

“For me, it is clear,” Rev. Guerekoyame-Gbangou said. “France is a big power. The United States is also a big power. If both are on the ground and working, the presence of each will stimulate the work of the other. … They will be able to re-establish peace.”

The religious leaders said they will continue to try to mend bonds among their people. These conflicts have helped build an interfaith “platform” for different religious leaders, Imam Layama said.

“You never know,” Rev. Guerekoyame-Gbangou said. “From one moment to the next, I could be a person chased from my house and in need for someone to take me in.”