One baby from 3 or 4 parents? Ethicists weigh in as FDA mulls research 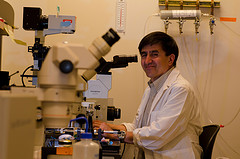 Shoukhrat Mitalipov of the Oregon Health and Science University.

WASHINGTON (CNS) — Fertilization techniques that would create babies from the DNA of three or four people to prevent the transmission of inheritable genetic diseases are being questioned by ethicists and others who say the procedures fail basic ethical and moral standards.

Chief among the concerns is that the techniques, which involve replacing a mother’s mitochondria with that of an egg donor, would pass on genetic alterations with unknown implications for future generations.

The techniques are controversial because they involve altering an embryo’s DNA, leading to questions about whether the government should approve the creation of, in effect, genetically modified humans.

In addition, the techniques rely upon in vitro fertilization, which the Catholic Church has long opposed as immoral. In IVF, a woman’s eggs are removed, united with sperm in a laboratory, and then implanted in the womb of the mother or a surrogate.

The two forms of the technology to overcome mitochondrial disease — maternal spindle transfer and pronuclear transfer — were discussed during a hearing called by the Cellular, Tissue and Gene Therapies Advisory Committee of the Food and Drug Administration Feb. 25-26.

The committee considered only scientific and technological aspects of the techniques, explaining beforehand that “ethical and social policy” aspects were outside of its scope.

The hearing stemmed from the work of Shoukhrat Mitalipov of the Oregon Health and Science University, the field’s leading researcher. He holds a doctorate in developmental and stem-cell biology. At the hearing, Mitalipov defended his work on mitochondrial transfer, which has been limited to monkeys, and said it was time to allow clinical trials on human cells.

The committee heard from several proponents of the technology as well as others who called for caution.

Maternal spindle transfer involves the extraction of the genetic material from a mother’s egg, which is then inserted into a donor egg in which the maternal spindle has been removed and discarded. The reconstituted egg then is fertilized by the father’s sperm before implantation in the mother. The procedure is known as “three-parent IVF.”

The second technique, pronuclear transfer, involves up to four parents. Potential parents would go through the procedure for in vitro fertilization with the embryo from the parents seeking a child to be combined with parts of a donor embryo. The process requires that both embryos be destroyed while the mother’s embryo is effectively cloned and repackaged before the cells begin to multiply and grow into a baby.

About 1 in 4,000 U.S. children born annually will develop a mitochondrial disease by age 10, according to the Mitochondrial and Metabolic Disease Center at the University of California San Diego.

The condition results from defective DNA in mitochondria, which convert fats and sugars into the energy a cell needs. Mitochondrial diseases can vary in severity, from life-threatening to few or no obvious symptoms. When present, such diseases primarily affect parts of the body that use a lot of energy including the brain, muscles, nerves, liver, kidney and heart. At their worst, the diseases can cause blindness, deafness, organ failure and epilepsy.

Outside of the hearing, concerns about the evolving technologies have come from a wide-range of voices including the U.S. Conference of Catholic Bishops, bioethicists, scientists and even abortion supporters.

“We’re taking something very natural and we’re doing some pretty scary things in the laboratory,” Jennifer C. Lahl, president of the Center for Bioethics and Culture in Pleasant Hill, Calif., said.

“The impact now is we are potentially giving the green light of moving forward on the dangerous manipulation of a human embryo that comes from three people,” Lahl told Catholic News Service. 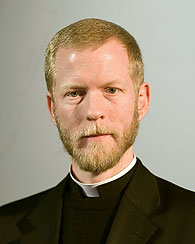 Father Tadeusz Pacholczyk, director of education at the National Catholic Bioethics Center in Philadelphia, objected to the procedures, telling CNS that they “introduce a rupture into parenthood by creating children who inherit genetic materials” from multiple parents.

In the maternal spindle transfer procedure, Father Pacholczyk explained, “we are not actually ‘repairing’ a defective egg, but constructing a new, alternative and clearly different egg out of the contributions from two separate women.”

“The final egg produced really belongs to neither woman so that the technological manipulations introduce a fissure between any child conceived from the engineered egg and both ‘mothers.’ The child becomes distanced or orphaned from both women involved in the process,” he said.

Father Pacholczyk also expressed concern that scientists present the pronuclear transfer technique as a way to cure an illness.

“This is not a situation where you start with a human being and do a medical intervention to fix a disease,” he said. “This is, rather, a case where you’re creating a new human being. You’re destroying two other humans to reconstitute a third. That is not a therapy for anybody.”

FDA actions are being monitored by the USCCB. Richard M. Doerflinger, associate director of the bishops’ Secretariat for Pro-Life Activities, said the agency may decline to act, leaving existing restrictions on the research in place. But if regulations governing the techniques are introduced, they will be subject to public comment and the USCCB would likely outline its concerns to the agency, he told CNS.

Doerflinger voiced particular concern that research in the field treats “human beings in their earliest stages as a means to an end, as objects of experimentation.”

He suggested that researchers instead focus on determining if the stem cells of a woman with mitochondrial disease are able to generate healthy mitochondria.

“If that idea could be combined with a way to allow reproduction naturally — you help correct the defect in the egg while it is in the ovary — some objections would cease,” he said.

In addition to Catholic concerns, Lahl took issue with the practice of researchers buying human eggs from women. She said many women selling their eggs are poor and see the few dollars they receive as necessary for survival.

“No one is talking about where the egg is coming from: young women who will subject themselves to risky drugs and procedures,” Lahl said.

“They (researchers) are not going to want one egg from an egg donor. They’re going to want 10, 20, 30 eggs. It is going to be the exploitation of women in the developing world.”

Recognizing the quickly evolving science in this area of human reproduction, more than 40 countries have banned human genetic modifications that can be inherited. But there has been willingness by health care regulators around the world to listen to the plea of scientists working on mitochondrial transfer technology.

In the United Kingdom, the government’s Human Fertilization Embryology Authority proposed regulations for the techniques Feb. 27. The regulations would allow the procedure only for women who are highly likely to pass mitochondrial disease to their children. They also specify that an egg donor would have no claim to parental rights.

Comments on the U.K. proposal will be accepted through May 21.

Because of the close ties between British and American researchers, the FDA may decide to follow suit.