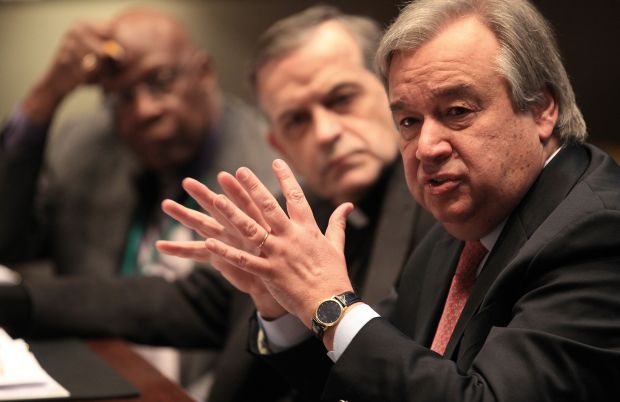 U.N. High Commissioner for Refugees Antonio Guterres gestures during a meeting at the U.S. Conference of Catholic Bishops' headquarters in Washington March 10. Looking on is Johnny Young, director of the USCCB's Migration and Refugee Services, and Auxiliary Bishop Eusebio L. Elizondo of Seattle, chairman of the bishops' Committee on Migration. (CNS photo /Bob Roller)

WASHINGTON (CNS) — The role of the Catholic Church is invaluable in keeping refugees safe, said the U.N. High Commissioner for Refugees Antonio Guterres, but his agency and others working with migrants need much, much more.

Speaking to a meeting of the U.S. bishops’ Committee on Migration and staff members of church agencies that deal with migrants, Guterres said the church is vital to helping victims of situations such as the volatile upheaval in the Central African Republic.

There, although the recent conflict is often described as a Christians versus Muslims crisis, the reality is that “religion is being used by unscrupulous political partisans,” Guterres said. That created an environment that’s very difficult for humanitarian agencies to handle. “They began using religion for propaganda.”

Guterres said several times during his March 10 meeting that although much of the violence in Central African Republic appears to be based upon religion, the reality is that in many hot spots there, the Catholic Church is keeping Muslims safe. That includes the chief imam of Bangui, Omar Kobine Layama, who has been sleeping in the home of Bangui Archbishop Dieudonne Nzapalainga for safety.

Continuing to serve that role, and to counter those who portray the conflict as religion-based are among the things he said the Catholic Church can do to help in one of the world’s most troubling situations of displaced people.

Guterres, a former prime minister of Portugal, said that in the nearly 10 years he has headed the U.N. agency charged with protecting and resettling the world’s refugees, he has come to see that the type of conflicts around the world are both unchanging and multiplying.

Regions that have been unsettled for decades, such as Afghanistan, never seem to get out of conflict. Others keep resurfacing, such as those in Somalia and the Central African Republic. Throughout, he said he values the church as a constant advocate for the protection of refugees and as a voice for all the world’s migrants.

In many parts of the world, he said, governments are passing laws to restrict movement and rights of migrants and refugees. Though they only “aspire to a better life,” Guterres said, migrants are increasingly subject to attacks from many fronts.

European nations, for example, “have become very selfish,” he said. Although many European countries are dependent upon migrants to maintain the vitality of their society, new laws are making it difficult for refugees and other migrants to resettle.

He urged the church to continue to advocate for the U.S. government to set an example for the world of generous treatment of people who must flee their homelands.

“The U.S. has the largest refugee resettlement program in the world,” Guterres said. “The way the U.S. behaves is extremely important” to how the rest of the world responds.

He said he hopes the U.S. will soon announce a resettlement program for Syrians, for example, that may help offset some of the obstacles Syrian refugees are encountering elsewhere. Some of those obstacles are unintentional, such as the pure overload of Lebanese society from absorbing 950,000 Syrian refugees. Others, such as borders being closed to people fleeing from a conflict, are more difficult to accept, he said.

In response to questions from the audience, he said the issue of children who are displaced from their homes and unaccompanied by relatives is one of the world’s most vexing problems. Guterres told of one refugee camp for Eritreans that has 2,000 children and teenagers who are on their own and who can’t be sent back to their families. In other cases, families are sending their children away, apparently in hopes of having the children send home money or to provide a link that enables other relatives to migrate, he said.

Often children are used as sexual slaves, held for ransom payments or used by smugglers to transport drugs. Simply determining what is in the best interests of a child sometimes can be difficult to determine, he said.

He described a recently launched venture of the UNHCR, Mercy Corps, Safe the Children and World Vision that is focused on preventing a “lost generation” of Syrian children.

Guterres said the project is aimed at helping the estimated 5.5 million Syrian children affected by its civil war. The organizations are calling for the public to support protection of threatened children but also for steps to break the cycle of violence and to support children in getting access to humanitarian assistance, education and psychological support.

PREVIOUS: ‘Great love of Jesus’ is best treasure anyone can have, inmates told