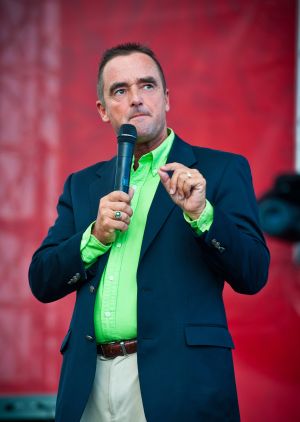 Mayor Jim Schmitt of Green Bay, Wis., pictured in 2012 at a Christian music festival, has invited Pope Francis to visit Green Bay in 2015 if the pontiff comes to the U.S. for an international family meeting in Philadelphia. (Sam Lucero, The Compass)

GREEN BAY, Wis. (CNS) — If the National Football League’s smallest city can be home to the four-time Super Bowl champion Green Bay Packers, why can’t it host a visit from Pope Francis?

That’s the thinking of Green Bay Mayor Jim Schmitt, who has sent a letter to Pope Francis inviting him to Green Bay in 2015.

“It comes back to why not Green Bay?” Schmitt told The Compass, the diocesan newspaper, in a telephone interview Feb. 28, a few days after emailing the letter to the Vatican. “It just seems that there’s a whole lot of synergy with what the pope speaks and what the greater community of Green Bay believes. We’ll start the effort now. It’s 18 months away.”

There has been speculation about Pope Francis attending the last day of the World Meeting of Families in September 2015 in Philadelphia, but there has been no official confirmation the pope will be there. Past popes have attended the final day of the gathering.

In his letter to Pope Francis, Schmitt said that Green Bay is a worthy destination, particularly because northeast Wisconsin is home to the only approved Marian apparition site in the U.S., the Shrine of Our Lady of Good Help in Champion, about 15 miles north of Green Bay.

In 2010, Bishop David L. Ricken declared as worthy of belief Marian apparitions that took place in Champion in 1859.

If the pope visits the U.S. for the 2015 World Meeting of Families, “I invite you to extend your visit to the greater Green Bay community and make a pilgrimage to the Shrine of Our Lady of Good Help,” Schmitt wrote to Pope Francis.

Schmitt told The Compass that he was told about the pope’s possible visit through the mayor’s office in Philadelphia. “With that, I started talking to a lot of people about the possibility of (Pope Francis) visiting Green Bay.”

He said he also met with the Green Bay Packers Stadium Board. “They said that sounds like a great idea. There’s actually funding available,” Schmitt said. He spoke at several Catholic functions the response “was ‘why not Green Bay,'” he said.

“The pope has such a devotion to our mother Mary. We have the Shrine of Our Lady of Good Help and from a security standpoint, we’ve had presidents here,” added Schmitt.

While Schmitt calls it a grass-roots campaign to bring Pope Francis to Green Bay, he explained that he is reaching out to Bishop Ricken and the Diocese of Green Bay. “Part of this will be a strong working relationship with the diocese.”

While the odds may be against Green Bay hosting a papal visit, it isn’t unprecedented to have a pope visit the state. Two years before his election in 1978, Blessed John Paul II paid a visit to Stevens Point.

“This would be awesome if it happens, but (if it doesn’t) just the joy it brings people, the thought of hosting the Holy Father. It’s just great,” said Schmitt, a member of St. Francis Cathedral Parish in Green Bay.

His office now has a website, www.popetogreenbay.com, inviting people to support the plan by signing an online petition.

“You just love to see youth be engaged with any leader — and the diversity he’s embracing,” added Schmitt. “The basic values of humanity that he speaks of, those are all things that build community and that’s what we are working on here. … What a great piece of the world we are here in northeast Wisconsin and only good can come out of this.”

NEXT: Peace walk, Stations of Cross procession call for end to gang violence