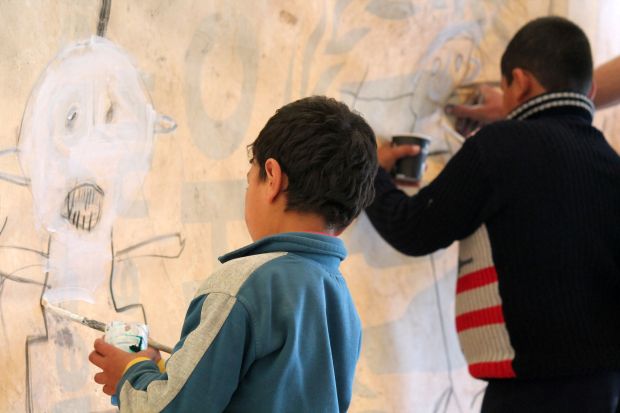 ZAATARI REFUGEE CAMP, Jordan (CNS) — As Syria’s civil war hurtles into its fourth year, hopes of returning home soon seem far off for the 2.5 million refugees sheltering in neighboring countries, like Jordan. Syrians are soon expected to overtake Afghans as the largest refugee population in the world, according to the United Nations.

Top U.N. officials warn that the grinding conflict will leave a generation of 5.5 million children — in and outside Syria — physically and emotionally scarred. But American street artist Samantha Robison is working hard to change that.

A native of Washington, D.C., Robison and her team of international artists paint alongside the refugee children, encouraging them to remain strong and positive in Jordan’s Zaatari camp.

Covered in splashes of paint in every color of the rainbow, Robison encourages a 9-year-old Syrian girl named Zeinab to express her future dreams through painting on a recycled tent tarp.

“I am drawing a bird flying in the air. To me, it represents the freedom we want,” the enthusiastic child said as she drew.

Peaceful demonstrations protesting the rule of Syrian President Bashar Assad erupted three years ago and were soon met by sniper fire from government troops before bursting into all-out civil war. 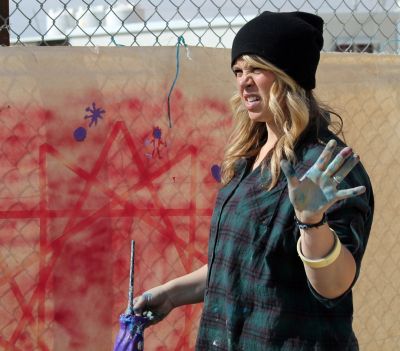 Robison said the young Syrian refugees at Zaatari remember the start of the conflict, but now look to the future.

“Yes, commemorate the three years, but also remember where they’ve come from and how much they’ve accomplished,” she said.

“Honor the human dignity and the next generation and the future of Syria. I think is where a lot of the energy needs to be focused,” she added, speaking of the children.

Zaatari is now the second-largest refugee camp in the world and Jordan’s fifth-largest city. Just more than half the 120,000 refugees there are under the age of 18.

Robison encourages the children to use their imaginations as they draw and paint and not to use well-known cartoon characters in their illustrations.

“What does your dream village look like? Draw yourself saying hello to children in other countries,” she urges them.

In the process, they magically transform dull canvas tents, metal trailers, schools and other facilities into colorful and creative works of art. Healing and hope come to the children and their families.

She encourages them to explore their creativity and have the space to just be children, something the civil war back home — full of bombings, the death of family members, and assaults — has robbed them of.

“Painting for these kids is fun and gives them a way to express themselves while putting them back in touch with themselves as children. It’s not about working or making ends meet,” said Leah O’Bryant, a Washington state artist working with Robison’s AptART organization in the camp.

“That’s something that kids take for granted in other places, but isn’t always possible here. They are expressing some intense emotions, but they are also just having fun. That’s one of the most important things that we do,” she said.

Syrian children along with women are among the most vulnerable of those fleeing the conflict, international aid workers say.

“The images on TV often show Syrian men fighting, but among the refugees, the heart of the story is women and children, who make up nearly 75 percent of the refugee population,” Caroline Brennan, Catholic Relief Services’ senior communications officer, told Catholic News Service March 17.

“Because they make up such a large percentage of the population, our services are predominantly supporting women and children, especially those in towns where the vast majority live as urban refugees, by providing for their basic needs for survival and health care,” Brennan said.

“Given the enormity of needs for women and children, we focus on education for children and counseling for mothers and children. Issues of trauma are so significant,” Brennan said.

She said CRS medical workers have observed that 45 percent of Syrian refugee children suffer from post-traumatic stress disorder and 60 percent from depression.

“Going to school helps children stay at their school level, have a place to go during the day and enables them to claim some semblance of childhood. Counseling is a big component of that, not only for those children, but their mothers. The mothers are caring not only for their children who are traumatized, but also making major decisions for their families in a way they were not necessarily making back home,” Brennan said.

A Syrian refugee mother who identified herself only as Reem said she struggles with her new role as the female head of her household.

“My husband divorced me recently, and my father died shortly afterward. I have to be strong and protect myself and my children. This is contrary to Middle Eastern culture,” the young woman emphasized.

Other Syrian female refugees say their husbands are also absent. They are either fighting back home or have been killed or abducted in the conflict.

“A glass might drop. It doesn’t even break, and the children are crying and shaking. Older children are wetting the mattress. The issues are severe,” Brennan said.

“The mothers are desperate to know how to care for children suffering from trauma when they have their own issues they are wrestling with. Our counselors are there to help,” she said.

NEXT: No official response from Ugandan bishops to country’s anti-gay law