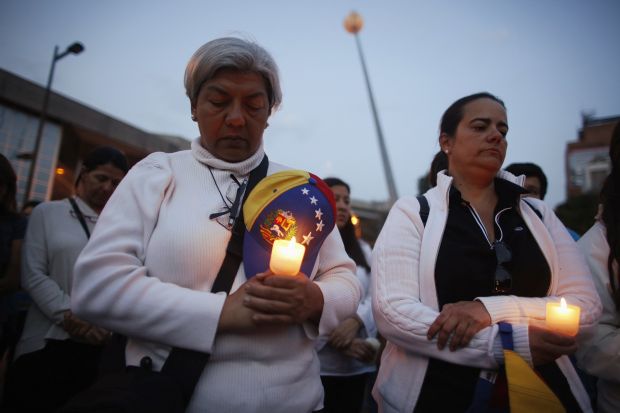 “The situation has been getting worse over the last year, but now we’re at the point where it has become very difficult for us to even find basic (food items) or to buy medications,” Janeth Marquez de Soler, executive director of Caritas Venezuela, told Catholic News Service March 10.

Shortages of basic foods, rising inflation, high crime and political divisions have led to tense protests across Venezuela in the past month as opponents of President Nicolas Maduro and thousands of students have taken to the streets to demand changes. Demonstrations on several occasions turned violent, however, leaving at least 21 people dead and prompting the bishops of Caracas to issue a letter calling for calm.

An related video about this story can be seen here.

In the March 7 letter, Caracas Archbishop Jorge Urosa Savino and his auxiliary bishops said, “We reject armed attacks committed by any citizen.”

The letter took issue with both the government’s response to the demonstrations as well as the tactics used by protesters who have also resorted to violence.

“The bishops call attention to the need for the government to listen to the protesters’ demands and effectively respond to their complaints,” the letter said. “Equally, the bishops make clear that we also reject the violence, coming from wherever it comes, as much from the protests as from the repression of those protests.”

The letter highlighted the use of force by the government, calling for authorities to instruct security forces on the use of proportional force.

Since early February, clashes among protesters, government security forces and armed paramilitaries aligned with the government have created tension in pockets across the country.

On March 3, the principal church in Colonia Tovar, west of Caracas, was reportedly damaged during an attack. A woman, who would identify herself only as Maria, told CNS that the damage was fairly minor but that residents in the area feared further violence.

In February, bishops urged both sides to respect human rights and avoid violence. Pope Francis also expressed his concern Feb. 26, saying, “It is my fervent hope that the violence and hostilities end as soon as possible and that all Venezuelans, starting with the political and government leaders, work to promote national reconciliation.”

The situation, however, remains protracted, exposing deep divisions across Venezuelan society a year after the death of President Hugo Chavez, whose self-styled socialism drastically cut poverty but left behind serious social and economic problems.

“We don’t see another way out of the situation we are in other than serious changes to the government,” said Cristina Noboa, a university student who has participated in the demonstrations.

Raised Catholic, Noboa said she’d like church leaders to take a stronger position on the side of the demonstrators.

“We have thousands and thousands in the street every day. What more proof do you need?” she asked.

Yet, the demonstrations are not as widespread as they have often been depicted, said Jose Mejia, a seminarian who volunteers at St. Peter Claver Parish in the 23 de Enero neighborhood of Caracas.

“Here in 23 de Enero and in this part of the city,” Mejia said, referring to the poorer neighborhoods that formed Chavez’s political base, “we have not seen any of the protests; it’s concentrated in the wealthier neighborhoods.”

“The people here are Chavistas and supportive of the government,” he said.

The parish provides breakfast and lunch to around 30 senior citizens a day, Mejia said, but that, too, has been affected by shortages of basic goods.

“Food is available, but it requires waiting in line, and that’s something we hear from people across Caracas,” he said.

Marquez said steep inflation — 56 percent last year, according to the government — is pushing up the cost of goods, while donations to Caritas remained flat.

“Even if we can find food, we can’t buy in the quantities that we need for the demand we have,” she said. “The government has programs specifically for the poor, and those have continued. They’re vital. But charities are also seeing more demand.”

Marquez said the situation is grave near the Colombian border, especially around San Cristobal, considered the birthplace of the protest movement and home to the most intense standoffs. On March 9, the National Guard moved in, smashing barricades, and launching tear gas. Protesters reportedly responded by throwing stones and Molotov cocktails.

A day later, a student leader was killed and two others were reported wounded by gunfire in the city of 600,000.