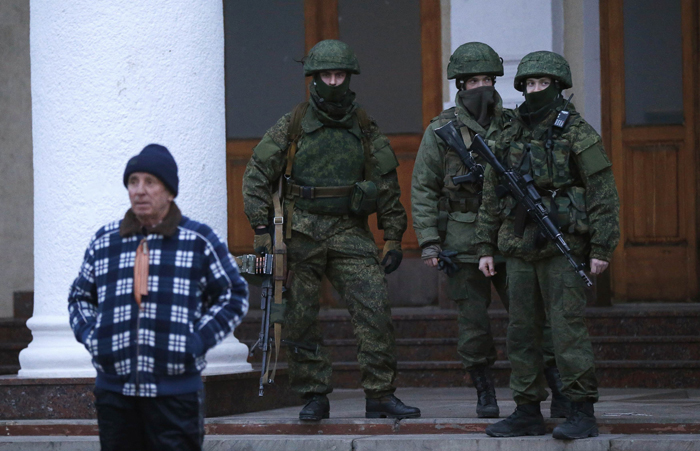 Armed men patrol at the airport in Crimea, Ukraine, Feb. 28. Church leaders in Ukraine appealed for peace in the Crimea peninsula as the government accused Russia of "carrying out an armed invasion." (CNS photo/David Mdzinarishvili, Reuters)

VATICAN CITY (CNS) — As uncertainty reigned in Ukraine and Russian troops appeared to have control of the Crimean peninsula, Pope Francis again asked the world’s Christians to pray for Ukraine and urged the parties involved in the conflict to engage in dialogue.

“I ask you again to pray for Ukraine, which is in a very delicate situation,” Pope Francis told tens of thousands of people gathered in St. Peter’s Square for the midday recitation of the Angelus March 2.

“While I hope that all sectors of the country will endeavor to overcome misunderstandings and build the future of the nation together,” the pope said, “I make a heartfelt appeal to the international community to support every initiative in favor of dialogue and harmony.”

After Russian troops entered Crimea, Major Archbishop Sviatoslav Shevchuk of Kiev-Halych, head of the Ukrainian Catholic Church, issued a statement March 1 saying, “Ukraine, unfortunately, has been pulled into a military conflict. So far no one is shooting, so far people are not dying, but it is obvious that military intervention has already begun.”

“Our people and our country are currently in danger,” the archbishop said. “We must stand up for our country, to be ready — if necessary — to sacrifice our lives in order to protect the sovereign, free, independent, and unified state,” he said in the statement distributed by the Catholic magazine Credo.

In Ukraine, March 2 was “Forgiveness Sunday” for Eastern Catholics and members of the Orthodox churches; Lent began March 3 for Catholics and Orthodox who follow the Byzantine tradition.

Months of protests sparked by a government decision to reverse a process of closer cooperation with Europe erupted in bloodshed in late February and led to the ouster of President Viktor Yanukovych. After an interim leader was appointed in Ukraine, the Russian government began what it called military exercises along the countries’ shared border and sent troops into Crimea.

In their Lenten letter, Archbishop Shevchuk and members of his synod called on Catholics to use the 40 days of Lent as a time of prayer, fasting and almsgiving to grow closer to God and to one’s neighbors. Lent, they said, is a time to convert from sin, suspicion and hatred and take responsibility together for the future of the country.

NEXT: Pope is challenging church to revitalize roots in Christ, cardinals say