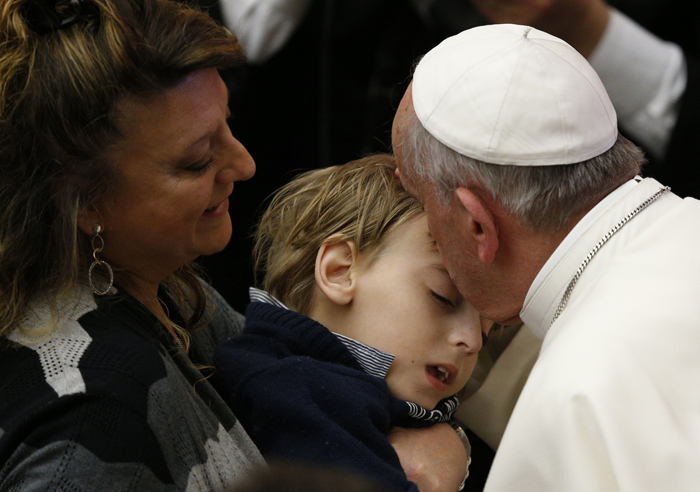 Pope Francis kisses a boy during an audience with people who are deaf or blind in Paul VI hall at the Vatican March 29. (CNS photo/Paul Haring) 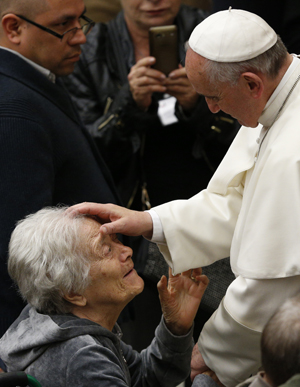 VATICAN CITY (CNS) — Only those who recognize their own limits can accept the great gift of salvation in Jesus Christ, which is why Catholics with disabilities are such important and powerful witnesses of faith, Pope Francis said.

Meeting March 29 with close to 7,000 members, staff and volunteers of the Apostolic Movement for the Blind and the Little Mission for the Deaf, Pope Francis insisted it is “truly blasphemous” to believe that a physical limitation or disability is a punishment from God.

“Jesus radically refused that way of thinking,” he said.

“Only one who recognizes his own fragility, his own limits, can construct relationships that are fraternal and marked by solidarity in the church and in society,” he said.

The key to being a trustworthy, effective witness to Jesus, he said, is first having had the experience of meeting Jesus.

“A witness to the Gospel is one who has encountered Jesus Christ, who knows him or, better, feels known by him, recognized, respected, loved and forgiven. This encounter has touched him deeply, has filled him with new joy and given his life new meaning,” the pope said.

Discussing the story from the Gospel of St. John about the man born blind — the same Gospel story read at Masses around the world March 30 — Pope Francis said the man becomes a believer and witness to Jesus and to “the life, love and mercy” of God. 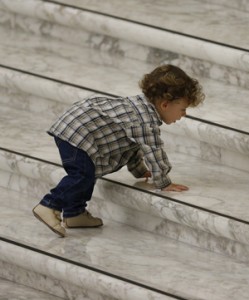 Father Delci da Conceicao Filho, a member of the Little Mission for the Deaf, told Pope Francis that too many parishes have, in effect, closed their doors to Catholics who are deaf because they make no provision for sign language or other forms of assistance. Too often, he said, those who are deaf are “without catechesis, without the sacraments and with faith. They are unable to have a personal encounter with Christ because there is no one to sign for them or no one willing to make subtitles for them.”

Pope Francis, reciting the Angelus March 30 with visitors in St. Peter’s Square, returned to the Gospel story and urged people to read and re-read the ninth chapter of St. John’s Gospel during the coming week.

He said the story, which deals only briefly with the miracle of the man recovering his sight, speaks at length of the man’s faith and the Pharisees’ doubts. The story “opens with a blind man who begins to see and ends — curiously — with those who presumably can see, but who continue to remain blind in their souls.” 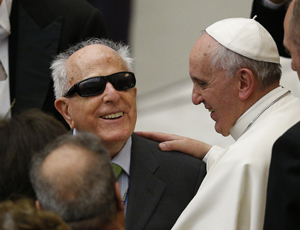 Pope Francis greets a man during an audience with people who are deaf or blind in Paul VI hall at the Vatican March 29. (CNS photo/Paul Haring)

The Pharisees, “closed in their presumptions, believe they already have the light and for this reason, they are not open to the truth of Jesus.” In fact, the pope said, their opposition to the light of Christ “becomes aggressive” and they throw the healed man out of the temple.

“Our lives sometimes are like that of the blind man who opens himself to the light, to God and his grace,” the pope said. “But unfortunately, sometimes we are a bit like those doctors of the law and from the heights of our pride we judge others and even the Lord.”

NEXT: Pope asks Curia to find ways to implement ‘Joy of Gospel’ in its work