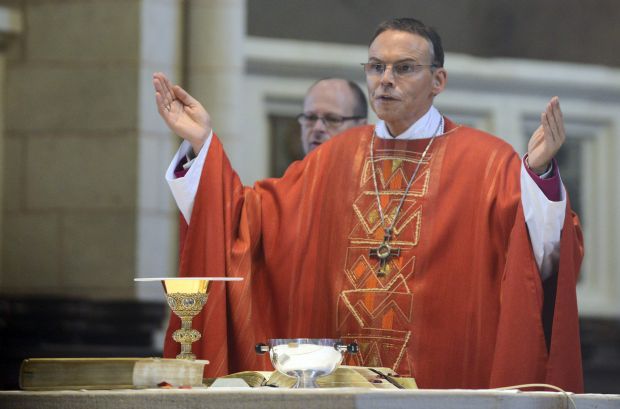 VATICAN CITY (CNS) — The Vatican has accepted the resignation of a German bishop who was at the center of controversy over expenditures for his residence and a diocesan center.

Following a diocesan investigation, the Vatican’s Congregation for Bishops studied the audit’s findings and accepted the resignation of Bishop Franz-Peter Tebartz-van Elst of Limburg. Auxiliary Bishop Manfred Grothe of Paderborn was appointed to serve as apostolic administrator of Limburg in the meantime, the Vatican announced March 26.

Bishop Tebartz-van Elst would be assigned, “at a suitable moment,” another unspecified assignment, the Vatican statement said. It said the Vatican accepted the bishop’s offer to resign “given that a situation exists in the Diocese of Limburg which prevents the fruitful exercise” of his office.

In Germany, Cardinal Reinhard Marx, president of the bishops’ conference, said the resignation would “end a period of uncertainty” in the Limburg Diocese. He told a Berlin news conference that he believed Bishop Tebartz-van Elst’s case had been handled “fairly and transparently” by the Vatican and German church.

“It was a major concern that all arguments should be placed on the table, and that everyone involved, including the bishop, should play their part in an independent report as the basis for a balanced decision,” said Cardinal Marx, whose remarks were carried by Germany’s Catholic news agency, KNA.

“Our church is now well on its way to ensuring greater transparency and increasing its credibility again,” he added.

Bishop Grothe told the news conference that the situation involving the Limburg bishop had “hurt many people.” He said he would “carefully and prudently reappraise what happened” and ensure “the path to a new beginning,” as administrator of the Limburg Diocese.

Pope Francis called on the German clergy and faithful in the diocese to accept the Vatican’s decision “with meekness and to try to dedicate themselves to rebuilding a climate of charity and reconciliation,” the statement said.

The pope had authorized a leave of absence for the bishop in October after allegations of overspending and leading a lavish lifestyle.

“A situation has been created in which Bishop Franz-Peter Tebartz-van Elst currently cannot exercise his episcopal ministry,” the Vatican said last year in a written statement.

The bishop has been at the center of controversy over the remodeling and building project in Limburg, which was estimated to have cost about $40 million. Media dubbed Bishop Tebartz-van Elst the “luxury bishop” and “Bishop Bling.”

In early September, Cardinal Marc Ouellet, prefect of the Congregation for Bishops, sent retired Cardinal Giovanni Lajolo to visit the diocese to promote peace between the bishop and some of the diocese’s priests concerned about the diocesan center project.

After the cardinal’s visit, Bishop Tebartz-van Elst agreed to publish figures about the construction project and cooperate with a commission established by the bishops’ conference to audit the project and examine how decisions were made. In most cases, church law requires consultation with a diocesan finance council before large sums of diocesan money can be spent.

In a separate controversy, the bishop agreed in November to pay a court-ordered fine of 20,000 euros rather than contest charges that he perjured himself before the Hamburg District Court. Hamburg prosecutors had charged him with lying to the court in a case involving the magazine Der Spiegel.

NEXT: Important dates in the life of Blessed John Paul II