Pope: Take up God’s offer to face life’s problems with his love, wisdom 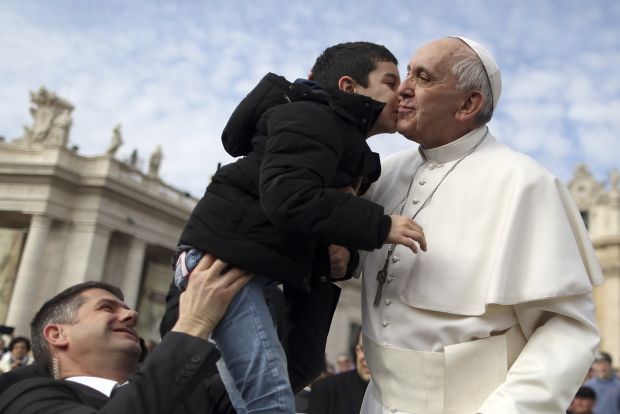 A child gives Pope Francis a kiss as the pontiff arrives to lead his general audience in St. Peter's Square at the Vatican April 2. (CNS photo/Alessandro Bianchi, Reuters)

VATICAN CITY (CNS) — People can choose either to tackle life’s challenges with the loving and wise heart of God or be driven by their own passions and interests, Pope Francis said.

All people, whether they know it or not, have access to the gift of the Holy Spirit, “who teaches us to see with God’s eyes, to feel with God’s heart, to speak with God’s words,” helping people build a peaceful and loving home, church and world, he said.

During his weekly general audience in St. Peter’s Square April 9, the pope began a new series of audience talks on the seven gifts of the Holy Spirit: wisdom, understanding, counsel, fortitude, knowledge, piety and fear of the Lord.

He started the new series focusing on the gift of wisdom, which is not anything like the human wisdom that comes from study and experience, he said. The spiritual gift of wisdom “is simply this: seeing the world, situations, circumstance and problems with God’s eyes.”

Often people see the world and what goes on around them “according to our own liking or according to where our heart’s at,” colored by personal feelings of love, hate, envy and other emotions, he said.

“Let’s think about a mom at home with the kids — like when one kid is going after one thing, another wants something else and the poor mom runs back and forth dealing with the problems,” he said. “When moms get exhausted and they scream at their kids, is this wisdom? I’ll ask again: Is this wisdom? What do you say?” asked the pope, coaxing his audience to respond.

“No! Instead, when a mom takes the child and scolds him gently and says, ‘You don’t do this for this reason’ and explains with a lot of patience, is this God’s wisdom?” he asked. “Yes! This is what the Holy Spirit gives us in life.”

The pope said the same kind of wisdom can be used when couples fight. Often arguments end with one or both spouses ignoring each other or “they give each other dirty looks. Is this God’s wisdom?” he asked. “No. Instead you say, ‘Well, the storm has passed. Let’s make peace, hmm?’ They start over and move forward in peace.”

The gift of wisdom also helps people distinguish between what comes from God and what doesn’t, “thus making the Christian a ‘learned’ person,” he said. It doesn’t mean one knows the answer to everything or understands everything, but rather, this person has “a taste” for God, can sense his presence and his love and knows how God works in the world.

The gifts come when one keeps a close relationship with God, he said. “When we are in communion with the Lord, it’s like the Spirit transfigures our hearts and makes us perceive everything with his warmth and his liking.”

Before the audience, while he was riding in the popemobile greeting people and kissing children, a man from the crowd shouted out to the pope: “Francis! There is nobody like you!”

The pope, pointing at him, shouted back: “You, too! No one like you. There are no two people like you!”

At the audience, the pope blessed a 9-foot tall, 3-foot wide wooden cross made out of the wreckage of boats carrying migrants from northern Africa to Lampedusa, Italy’s southernmost island.

The 130-pound-cross is to be carried around Italy “to bring a message of solidarity and peace between communities, parishes, cultures, cities and faiths,” the Vatican newspaper said April 8.

Last July, the pope visited Lampedusa after seeing newspaper headlines describing the drowning of immigrants at sea. The island is often the first port of entry for migrants trying to reach Europe from Africa. The United Nations estimates that the dangerous sea crossings have cost the lives of more than 20,000 migrants in the past 25 years.

PREVIOUS: Our need for a little more mercy

NEXT: Praying Lent: Thursday of the Fifth Week of Lent