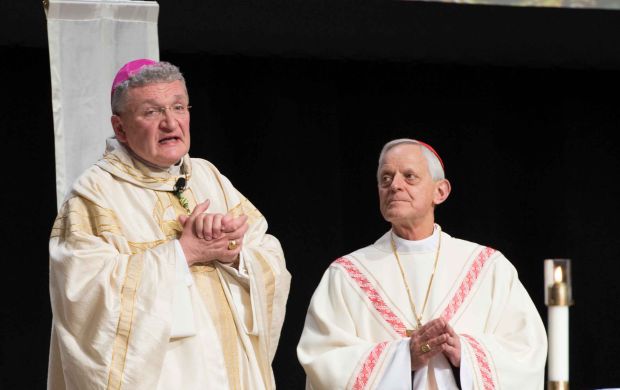 PITTSBURGH (CNS) — Cardinal Donald W. Wuerl of Washington told Catholic educators in Pittsburgh for the National Catholic Educational Association’s annual convention that “education is the task of all of us.”

The April 22-24 convention and expo at the David L. Lawrence Convention Center was expected to draw more than 6,000 participants, including teachers, administrators, catechists, priests and professors.

Speaking on the new evangelization in the opening day’s keynote, the cardinal highlighted the importance of the Catholic Church’s educational ministry and the need for church leaders and educators to working together to ensure Catholic education will help future generations learn about the Gospel and encounter Jesuit Christ.

“In our structured, organized religious education efforts, Christ’s voice is heard today and his Gospel announced,” he said.

In welcoming Cardinal Wuerl, the attendees were welcoming a local boy home.

A Pittsburgh native, he was bishop of Pittsburgh for 18 years before being named to head the Washington Archdiocese in 2006. He became a cardinal in November 2010.

As a boy, he attended St. Mary of the Mount Catholic School in the city’s Mount Washington neighborhood. After his ordination as a priest of the diocese in 1966, he was the pastor of St. Rosalie Parish in the Greenfield district. As Pittsburgh bishop, he reached thousands of Catholics via his TV program, “The Teaching of Christ.”

Cardinal Wuerl concelebrated the convention’s opening Mass with Pittsburgh Bishop David A. Zubik, who welcomed the congregation and noted the city is called the “City of Bridges.” In a letter of greeting in the program, the bishop also thanked the participants for being “a bridge of the church in all its diversity and universality.”

Before officially opening the Exhibit Hall, NCEA’s executive vice president, Patrick Lofton, invited attendees to connect with NCEA and one another by engaging on Twitter and Facebook.

To commemorate the association’s 110th anniversary, the general session ended with a tribute video that took a look back over the decades. It had as its theme: “As we connect the past, present and future of Catholic education.”

NEXT: New Hampshire priest gets four years in prison for felony theft