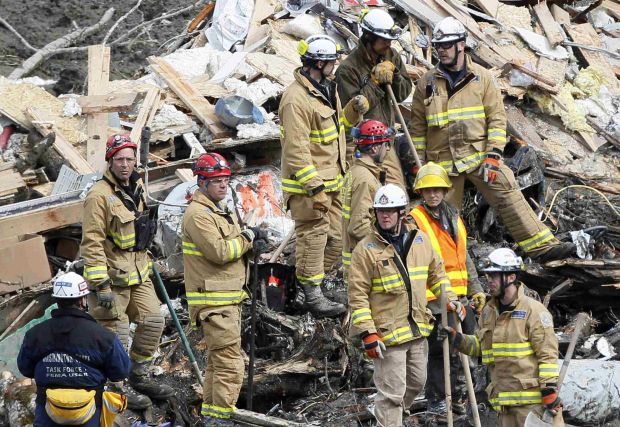 Rescue workers look for victims in the mudslide near Oso, Wash., March 26. The death toll from a massive landslide in Washington state stood at 24 March 26, but the community braced for a higher body count as search teams combed through debris looking for scores of people still missing four days after the disaster. (CNS photo/Rick Wilking, Reuters)

ARLINGTON, Wash. (CNS) — Catholic Community Services of Western Washington and Immaculate Conception Parish in Arlington are seeking donations and working hard to help those affected by the Oso mudslide, about 55 miles north of Seattle.

The money collected will help defray the funeral expenses of those who perished in the March 22 disaster, assist those who lost their homes and possessions, and help the Oso community in a variety of other ways.

As of April 3, the number of confirmed deaths had reached 30. The number of those missing dropped to 17.

Donations made to Catholic Community Services through its website, www.ccsww.org, or by mail will be passed along to Father Tim Sauer, pastor at Immaculate Conception Parish in Arlington and St. John Vianney Parish in Darrington, for distribution. The parish also is collecting donations.

Under Father Sauer’s direction, the two parishes already have been helping those affected.

The Arlington church, which is next to a Red Cross emergency shelter, has been open for anyone needing some quiet time. After the disaster struck, the parish office was open that Saturday and a volunteer was helping the staff by fielding phone calls for assistance and offers of help. Other parishioners were preparing to feed some of those participating in the recovery efforts.

“Father Sauer is strongly committed to making the parish facilities available to serve those impacted by the mudslide,” said Will Rice, regional chief of operations for Catholic Community Services Northwest. The agency, which serves Snohomish, Skagit and Whatcom counties, has been working closely with Father Sauer in the disaster’s aftermath.

Father Sauer has opened the parish facilities to Red Cross mental health counselors, Rice said. And he agreed to a request from the Snohomish County Human Services Department to have “navigators” from community-based organizations based at his two parishes, Rice said in a statement. These navigators will help the people affected by the mudslide get the assistance they need.

Among the navigators working in Arlington and Darrington are the Catholic services agency’s staff members from Everett who will help residents secure housing and other services, Rice said.

In addition, Catholic Community Services will provide two full-time counselors at Darrington Elementary School for two weeks after students return from spring break, Rice said. After the two weeks are up, the agency will evaluate what further assistance may be needed.

“We are so appreciative of the staff who are delivering services to these communities during this very difficult and challenging time,” Rice said, noting there was a lot of behind-the-scenes work involving the agency’s staff at many levels.

“We have been very busy and are ready to do more if it is needed,” he added.