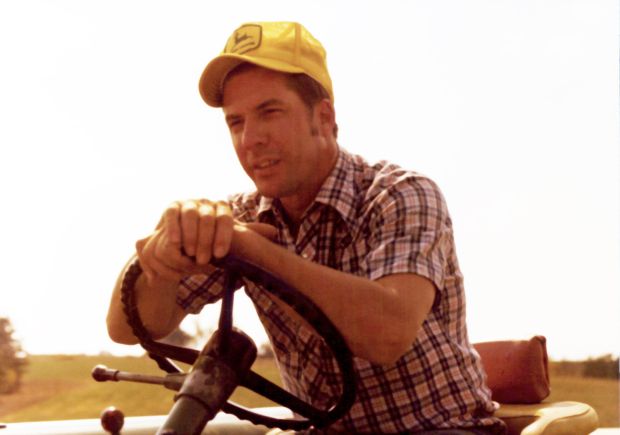 People in and around the small town of Truro, Iowa still remember Joseph A. Hays as the farmer whose letter convinced John Paul II to come to Iowa during his first tour of the United States in 1979. (CNS photo/courtesy of The Catholic Mirror)

TRURO, Iowa (CNS) — People in and around the small town of Truro, southwest of Des Moines, still remember Joseph Hays as the farmer whose letter persuaded Pope John Paul II to come to Iowa during his, and any pope’s, first tour of the United States in 1979.

At the time, the young father of four children was involved in an effort to encourage people to take better care of the lands entrusted to them by God. He mentioned the Strangers and Guests, Toward Community in the Heartland program in the letter he wrote to the pontiff, in which he extended an invitation for a visit.

“Our prayer here in the heartland of our United States is that more people become aware of our program, develop a true concern for our land and its use by mankind,” he wrote.

Hays presented the letter to his parish priest at Immaculate Conception Church in St. Marys, Iowa. The pastor encouraged him to present it to then-Bishop Maurice J. Dingman of Des Moines. The bishop was going to be at the parish for a meal later that week where Hayes and his family were serving. The pastor made sure to seat the farmer near the bishop. At the meal, Hays presented his proposal to Bishop Dingman.

“The bishop looked at me like, ‘Are you crazy?'” remembered Hays. “After I read the letter aloud, a light bulb went off in his head.”

Hays, his wife Ann and their children — Paul, 17, Mark, 15, Theresa, 13, and Ronda, 11 –had the honor of presenting the gifts during the Mass. During that encounter with the pope, Hays remembers a special moment between the Pope John Paul and his son Paul. The teen had developmental disabilities and was prone to behavior problems.

“We went up there toward the altar,” Hays said. “Paul had visually seen the pope one time before when the pope got off the helicopter. Paul steps away from us and walks directly up to the pope and says, ‘You’re John Paul II.’ The pope said, ‘Yes, I am.'”

The pontiff then smiled at the teen and gave a blessing on his forehead with the sign of the cross.

“The kid had behavior problems,” Hays said. “After the blessing, it just really smoothed out for a couple of years after that. There was a marked difference.”

Hays fondly recalls that moment and attributes the calmness his son experienced afterward to divine intervention. Paul died in 2008. The Hays family still belongs to Immaculate Conception. Hays, now in his 60s, is retired from farming. He and Ann adopted a five-year-old child several years ago.

Hays remains involved with efforts to improve stewardship of the land. He appreciated John Paul II’s emphasis on the importance of working the land during his visit because he believes it is “important to prize whatever God has given us and take care of it.”

With John Paul II being canonized, Hays reflected on his legacy.

“I think he did what he could do to enhance the faith and the religion itself,” he said.

Russo is a staff writer at The Witness, newspaper of the Archdiocese of Dubuque.

NEXT: NCEA hears that the new evangelization turns church to Jesus’ good news