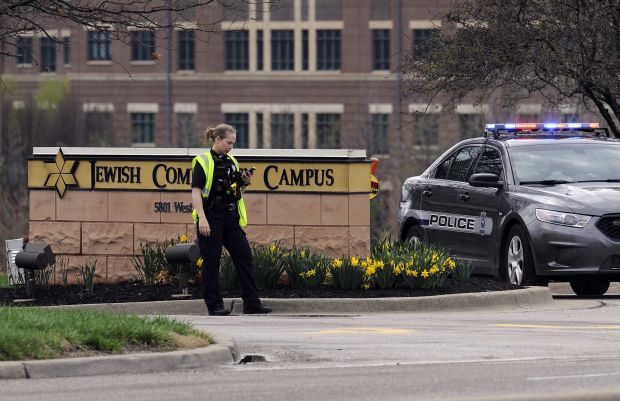 A police officer guards the entrance to the scene of a shooting at the Jewish Community Center of Greater Kansas City in Overland Park, Kan., April 13. (CNS photo/Dave Kaup, Reuters)

UPDATED – OVERLAND PARK, Kan. (CNS) — Outpourings of grief and support came in response to the murder of three people at two Jewish-run facilities in the Kansas City suburb of Overland Park April 13, the day before the Jewish feast of Passover was to begin.

Although none of the three dead were Jewish, local police and the FBI labeled the killings a hate crime the day after the shootings. A former Ku Klux Klan leader with a history of anti-Semitism was charged in connection with the killings.

One of the dead was a Catholic woman, Terri LaManno of Kansas City. She was at Village Shalom, where Frazier Glenn Cross, according to police, headed after allegedly shooting a doctor and his teenage grandson at the Jewish Community Center of Greater Kansas City a mile away.

LaManno was a member of St. Peter Parish in Kansas City. Her identity was released midmorning April 14. Her mother lives at Village Shalom, an assisted living residence near the community center.

The married mother of two college-age children, LaManno, 53, worked an occupational therapist at the Children’s Center for the Visually Impaired, according to the Kansas City Star.

The newspaper reported that a rosary was said for LaManno after Mass April 14.

“I express my deepest condolences to the Jewish community for the unspeakable act of violence that occurred on their campus on Sunday,” said Archbishop Joseph F. Naumann of Kansas City in an April 13 statement.

“Our prayers also extend to the Methodist Church of the Resurrection for the loss they feel as a congregation, and to all the families who have experienced pain, sorrow and loss because of this event,” Archbishop Naumann added. The other two victims, Dr. William Lewis Corporon, 69, and 14-year-old Reat Griffin Underwood, were members of that congregation.

“I will remember all of you as we enter this prayerful time of remembrance — Holy Week and Passover,” Archbishop Naumann said.

The American Jewish Committee lamented the killings in an April 13 statement.

“Our hearts go out to the victims of this heartbreaking tragedy,” said AJC executive director David Harris.

“As we await more details on the attack and its motive, we join in solidarity with the entire Kansas City area community, both Jewish and non-Jewish, in expressing shock, sadness and dismay,” Harris added. “We can’t help but note that this attack comes on the eve of Passover, a celebration of Jewish freedom from oppression and violence.”

The Council on American-Islamic Relations, a Washington-based Muslim advocacy group, said U.S. Muslims “stood in solidarity” with American Jews in the wake of the attacks, which also critically wounded a 15-year-old boy.

President Barack Obama, in an April 13 statement, said, “While we do not know all of the details surrounding today’s shooting, the initial reports are heartbreaking.”

Underwood had been driven by his grandfather to the Jewish Community Center so he could audition for an “American Idol”-style competition called KC SuperStar.

Cross, 73, who also has used the name Frazier Glenn Miller, or simply Glenn Miller, was caught by a television camera shouting “Heil Hitler!” inside a police car after his arrest.

An April 15 AP story said that Cross was charged with one count of capital murder for the deaths of the 14-year-old and his grandfather and one count of first-degree premediated murder for the killing of LaManno. Cross was being held on $10 million bond and was to appear in court the afternoon of April 15.

When he heard about the Overland Park shootings, Pittsburgh Bishop David A. Zubik said, “I felt sick: Not again. Not ever again.” For the Pittsburgh area, he said, the news was “doubly painful,” because southwestern Pennsylvania was still reeling from the stabbing rampage at an area high school just days earlier.

“I pray for their healing in body, mind and spirit. My heart is troubled by both tragedies,” he said in an April 14 statement. “As we grieve the brutal act of hatred committed against our dear sisters and brothers in Overland Park, we are appalled that it was committed in the very week that Jews and Christians each begin to celebrate the redeeming love of God at Passover and at Easter.”

“This year it is the grief and horror of this hate crime that will mark the holiday as different,” Bishop Zubik added. “In sharp contrast, our response must be marked by love and solidarity as Jews and Christians, people of all faiths and people of no faith at all reach out to one another with comfort and to say that hatred has no place in our society. Together we must redeem this moment. Love must triumph over hate.”

In a statement released April 15 by the Ahmadiyya Muslim Community USA, based in Silver Spring, Md., Wasim Malik, the organization’s national vice president said: “As Muslims, we have regard for all humanity: Hindus, Christians, Jews or Muslim — they are all our fellow brothers and sisters. … (We) mourn the loss of our fellow human beings. Our prayers and sympathies are with our Jewish brethren.”