Holy Fathers: Is being pope a shortcut to sainthood? 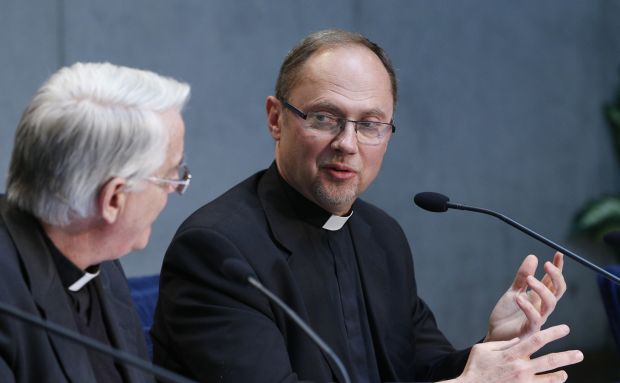 VATICAN CITY (CNS) — “They call me Holy Father and that is what I must be,” the future St. John XXIII wrote in his diary.

A nun who worked in the papal apartments with the future St. John Paul II saw him tired one day and said, “I’m worried about Your Holiness.” And he responded, “I, too, am worried about my holiness.”

Most Catholics would agree the church needs holy and saintly popes, but as the April 27 Mass for the canonization of Blesseds John and John Paul approached, some questioned the need to canonize them.

The debate is not new. Shortly after Blessed John Paul died in 2005 and Pope Benedict XVI waived the five-year-waiting period before his sainthood process could open, a respected Italian journalist wrote that canonizing popes was a way for “the Roman hierarchy to canonize itself.”

But one of the most authoritative and productive experts in the church’s saint-proclaiming process, Jesuit Father Paolo Molinari, said in 2008 that “recent popes have not been proposed for sainthood just because they were popes, but because people recognized in them an excellent way of living as Christians.”

Another criticism revolves around the quick pace of the sainthood process for popes, especially for Blessed John Paul. Questions have been raised about how it is possible in such a short time to thoroughly investigate a candidate’s life and writings, not to mention the enduring devotion of the faithful.

Msgr. Slawomir Oder, postulator or promoter of Blessed John Paul’s sainthood cause, was asked by media April 22 about reports that the pope had ignored evidence that Father Marcial Maciel Degollado, the late founder of the Legionaries of Christ, had been sexually abusing minor seminarians and leading a double life.

The postulator said the Vatican, as part of the canonization process, insisted those reports be investigated. He said investigators determined “there exists no sign of the personal involvement of John Paul II.”

In Blessed John Paul’s sainthood cause, he added, the dispensation of the five-year waiting period “was the only exception” made from the normal procedure called for in church law.

Blessed John Paul, who beatified and canonized a record number of Catholics, often explained that the church solemnly recognized certain holy men and women so the Catholic faithful would have models to imitate. On a practical level, he urged the Congregation for Saints’ Causes to devote more time and energy to identifying, studying and speeding up the sainthood processes for laypeople, especially married couples, because modern Catholics needed those models.

The saints may be models, but they are not angels, and the priests formally promoting the causes of the two popes acknowledged that fact.

“John XXIII was aware of his defects … and his own limits,” including his “good appetite” and struggle losing weight, said Franciscan Father Giovangiuseppe Califano. He said Blessed John had a self-deprecating sense of humor, which made him “more endearing.”

“John Paul II had defects like every man,” Msgr. Oder said. “True holiness lies in a person, responding to God’s grace, correcting his defects,” which in the case of Blessed John Paul included sometimes being mercurial or brusque. “He reacted,” sometimes too quickly, the monsignor said. As archbishop of Krakow he once got so angry at one of his priests that he demanded the man’s driver’s license and forced him to walk back to his parish. “He later asked forgiveness.”

At a Vatican briefing for the media, Msgr. Oder said, “It’s true there are currents opposed to the canonization of popes,” but he argued that all canonizations are good for the church because they demonstrate that individuals really can fulfill the call to holiness and are “a tangible sign of the church’s spiritual fruitfulness.”

“It would be absurd to have a pope who evangelizes and doesn’t arrive at holiness himself,” Msgr. Oder said.

In addition, St. John Paul will remain “a point of reference for his successors, but not only for them,” he said. Karol Wojtyla, the future pope and saint, pursued holiness as a student, an actor, a quarry worker, a poet, priest and bishop — and many people can find inspiration in his life.

Father Califano, postulator of the cause of Blessed John, said it is obvious the vast majority of Catholics never will be called to imitate his holiness in being pope, but they can imitate his “desire to belong to the Lord.”

The Franciscan works mostly on the causes of other Franciscans, but occasionally promotes other causes as well, including the recently beatified 19th-century Queen Maria Christina of Savoy.

“Recently I’ve had the joy of proposing for the veneration of the church both a queen and a pope. Obviously, they led totally different lives, but in fulfilling the call of every baptized Christian, the call to holiness, they are similar,” he said.

Popes are not canonized because they are popes, but because they lived exemplary Christian lives, Father Califano said. “Pope John was holy even as a child and as a young adult, in his desire to know himself and follow God’s will.”

“Obviously, his papacy was the apex of his holiness, because then he had enormous weight on his shoulders, a great responsibility, and still knew how to pursue God’s will,” the postulator said.

Jesuit Father Federico Lombardi, Vatican spokesman, said thinking of new saints only as models to imitate narrows their importance and misses one of the riches of Catholic teaching.

“Canonized saints are also intercessors,” he said. “They are recognized by the people of God as friends, intercessors and guides to an encounter with God. And, obviously, that is what these popes are.”

PREVIOUS: In Holy Land, it’s ‘I am Christian’; denominations aren’t so important

NEXT: Bishop: South Sudan has become ‘the place where God weeps’