Iraqis in Jordan go to the polls, hoping for stability at home 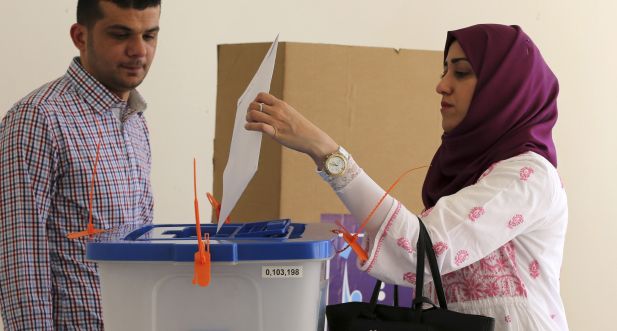 An Iraqi woman living in Jordan casts her ballot at a polling station in a government school in Amman April 27. (CNS photo/Muhammad Hamed, Reuters)

AMMAN, Jordan (CNS) — A steady stream of Iraqi refugees, smiling and displaying purple index fingers, emerged from a polling station in the Hashemi Shamali district, where the majority of these urban refugees live in the Jordanian capital.

“Change is badly needed in Iraq. Hopefully the elections will yield a suitable leader. God is gracious,” said Um Martin, a Chaldean Catholic woman from the biblical city of Ninevah in northern Iraq.

“My family and I fled here one month ago because of the threats and attacks on Christians. We are hoping that, after the elections, there will be greater stability,” added the woman.

Iraqi Catholic refugees, along with their exiled countrymen, are voting in the first parliamentary polls since the 2011 withdrawal of U.S. troops from their violence-plagued nation. Iraqi expatriates in more than 20 countries were permitted to cast ballots before the April 30 vote in Iraq.

About 300,000 Iraqi refugees still live in Jordan, more than a decade after the U.S.-led invasion that toppled Saddam Hussein. Other Iraqis continue to flee for safety, although the country’s ambassador said only 50,000 Iraqis in Jordan are old enough to vote.

Newcomers, such as Um Martin, told Catholic News Service that the security situation for Christians in Iraq is becoming ever more precarious. They hope the vote will remove Prime Minister Nouri al-Maliki and put in someone more capable of addressing the surging violence and instability.

“We left because of problems, we were threatened,” her husband said, without providing details.

“There is violence specifically targeting Christians in the northern city of Mosul and its environs. There are about 40 to 60 families who fled here recently,” he added, saying they are unsure exactly who is carrying out the measures against Christians.

“Many have had to leave the country. But God willing, things will change, and all of this violence will end,” the man said.

“If there is change following the elections, we will return home. But if not, then we will remain in Jordan. Honestly, al-Maliki did not accomplish anything. Things are bad,” he said with frustration evident in his voice.

Al-Maliki is battling for a third term as prime minister, but he faces opposition from political opponents. The resurgence of sectarian violence, which nearly tore Iraq apart in 2006 and 2007, underscores the precarious politics of a democratic, but splintered nation.

U.N. Secretary-General Ban Ki-moon has condemned violent election-season attacks that have targeted political leaders, candidates and voters in Iraq. He urged the country’s leaders to ensure that everyone is able to take part in the political process.

Iraq’s Christian population has once again come under threat, with senior clergy, priests and parishioners becoming victims of kidnappings, bombings and murder, often by extremist militants.

“Many Iraqi Christians are turning out to vote because people want to find the way for peace. Others really want to return home,” said Father Raymond Moussalli, patriarchal vicar of the Chaldean Catholic Church in Jordan. He has spent many years in Jordan ministering to Christian refugees who have fled Iraq.

Father Moussalli’s Amman congregation currently has about 2,000 people who have come from all over Iraq, including the capital, Baghdad, the northern areas of Mosul, Ninevah, and Kurdistan as well as the predominantly Shiite city of Basra in the South.

“We hope that the new government will make peace,” he said solemnly.

A Catholic from Baghdad, Abu Laith, said he and his family fled to Jordan a year ago because many family members were killed.

Despite having a good job as a nurse in a hospital for 12 years and having his young children enrolled in school, he and his family decided to leave Baghdad because of the violence committed against his family and their Christian community.

“The terrorism must end. The people of Iraq are not OK,” he said as he came out of the polling station holding his 10-month-old son.

Whether Christian, Sunni Muslim, or Iraqis from a tiny sect called the Sabean-Mandean, who are followers of John the Baptist, those interviewed at the polling station said they want to see al-Maliki out of office and someone else at the helm.

But some analysts believe voters in the April 30 polls inside Iraq will cast ballots along sectarian and ethnic lines, with no single party expected to win a majority.

With more than 9,000 candidates competing for 328 parliamentary seats, others said they expect an alliance again led by al-Maliki, a Shiite, to win and for him to seek a third term as prime minister.