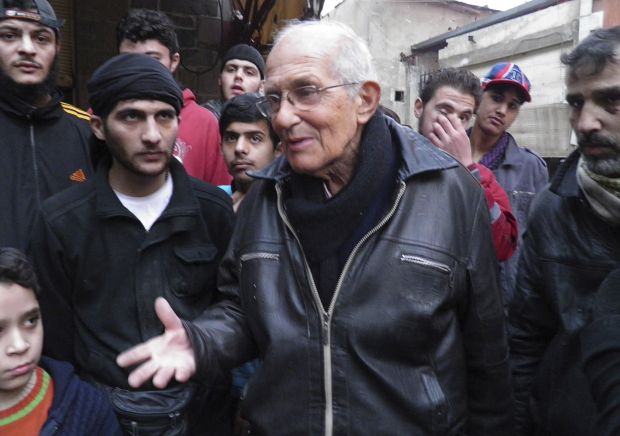 UPDATED – VATICAN CITY (CNS) — Pope Francis said the assassination of “my confrere,” a 75-year-old Dutch Jesuit in Syria, “filled me with deep sadness and made me think again of all the people who suffer and are dying in that martyred country.”

Jesuit Father Frans van der Lugt “arrived in Syria about 50 years ago” and “always did his best for everyone with graciousness and love, and so was loved and held in esteem by Christians and Muslims,” the pope said April 9 at the end of his weekly general audience.

Father Van der Lugt had refused to leave war-torn Syria, instead staying in Homs to help the poor and homeless. He was beaten by unidentified armed men and killed April 7 with two bullets to the head, according to the Jesuits’ Middle East province.

“From my heart, I ask you all to join my prayer for peace in Syria and in the region,” Pope Francis said, “and I launch a heartfelt appeal to Syrian leaders and to the international community: Silence the weapons! Put an end to the violence! No more war! No more destruction!”

Father Van der Lugt, a psychotherapist, had worked in Syria since 1966 and had been offering shelter in his monastery to Muslims and Christians left homeless by the war, which began in March 2011.

In a statement, Father Adolfo Nicolas, superior general of the Jesuits, and the staff of the Jesuits’ headquarters expressed their sorrow “for the brutal assassination of a man who dedicated his life to the poorest and neediest, especially in Homs, and who did not want to abandon them even at times of great danger.”

“He always spoke of peace and reconciliation,” the statement said, “and he opened his doors to all those asking help without distinction of race or religion. ‘I don’t see Muslims or Christians,’ he used to say, ‘but only human beings. I am the only priest and the only foreigner in this place, but I don’t feel like a foreigner.'”

The Jesuits prayed that “his sacrifice would bring the fruit of peace and that it would be a further stimulus for silencing the weapons and setting aside hatred.”

Father Van der Lugt became known around the world after appealing for aid for the people of the besieged city of Homs in a video posted on YouTube in late January.

The United Nations supervised an evacuation of about 1,400 people from Homs in early February; arriving in Jordan, the refugees confirmed Father Van der Lugt’s accounts of people, especially young children, starving to death.

Speaking to Catholic News Service by telephone Feb. 6, the Jesuit had said: “There has been no food. People are hungry and waiting for help. No injured people have been allowed to leave. Families have been hoping to get out of the siege and out of the fighting between the two sides.”

“Father Frans was a beacon for all of us; he did not only preach about love and reconciliation but he lived it out every day — in humility and with compassion for all — until the very end,” said Father Peter Balleis, JRS International director.

PREVIOUS: Memories of genocide drive Rwandans in rebuilding their nation