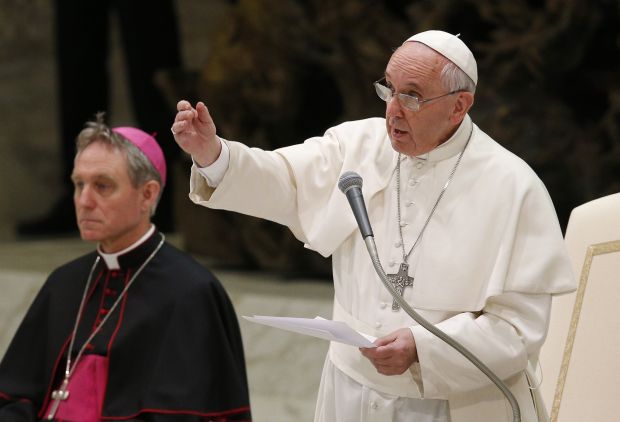 VATICAN CITY (CNS) — “I feel called to take responsibility for all the evil some priests — large in number, but not in proportion to the total — have committed and to ask forgiveness for the damage they’ve done with the sexual abuse of children,” Pope Francis said.

“The church is aware of this damage” and is committed to strengthening child protection programs and punishing offenders, he told members of the International Catholic Child Bureau during a meeting April 11 at the Vatican.

The remarks appeared to be the pope’s first apology for the sex abuse scandal, following earlier statements affirming the Vatican’s work investigating and punishing perpetrators, and encouraging bishops to support abuse victims. The pope also has said the church deserves to be forced to make monetary settlements to victims.

Meeting with leaders of the International Catholic Child Bureau, an organization based in France and dedicated to defending children’s rights, Pope Francis said it was hard to believe “men of the church” would commit such horrors.

“We don’t want to take a step backward in dealing with this problem and with the sanctions that must be imposed,” the pope said. “On the contrary, I believe we must be very strong. You don’t play with children’s lives!”

Pope Francis also spoke about the importance of defending children’s right “to grow in a family with a mother and father able to create a healthy environment for their growth and affective maturity,” which includes “maturing in relationship to the masculinity and femininity of a father and a mother.”

Parents have a right to determine the appropriate “moral and religious education” of their children, he said, and should not be subject to school curriculums that are thinly veiled courses of indoctrination into whatever ideology is strongest at the moment.

The pope said he wonders sometimes whether parents are “sending a child to school or to a re-education camp” like those run by dictatorial governments.

Obviously, he said, children need help in responding to the problems and challenges contemporary culture and the media raise. Young people can’t be kept in “glass jars,” but must be given the values that will help them evaluate what cultural trends respect their dignity and freedom and the dignity and freedom of others.