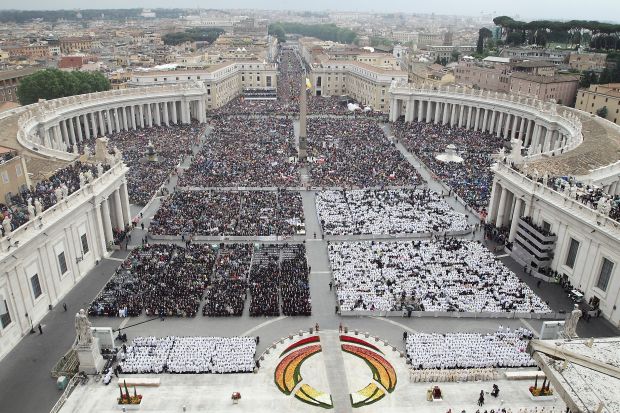 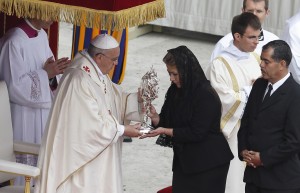 Pope Francis gives back the relic of St. John Paul II to Floribeth Mora Diaz, accompanied by her husband Edwin, during the canonization Mass for SS. John XXIII and John Paul II in St. Peter’s Square at the Vatican April 27. Mora Diaz’s cure from an aneurysm in 2011 was the second miracle in the sainthood cause of St. John Paul. (CNS photo/Paul Haring)

VATICAN CITY (CNS) — Canonizing two recent popes in the presence of his immediate predecessor, Pope Francis praised the new Saints John XXIII and John Paul II as men of courage and mercy, who responded to challenges of their time by modernizing the Catholic Church in fidelity to its ancient traditions.

“They were priests, bishops and popes of the 20th century,” the pope said April 27, in his homily during Mass in St. Peter’s Square. “They lived through the tragic events of that century, but they were not overwhelmed by them. For them, God was more powerful.”

“John XXIII and John Paul cooperated with the Holy Spirit in renewing and updating the church in keeping with her original features, those features which the saints have given her throughout the centuries,” he said.

Speaking before a crowd of half a million that included retired Pope Benedict XVI, Pope Francis praised St. John for his best-known accomplishment, calling the Second Vatican Council, which he said “showed an exquisite openness to the Holy Spirit.”

“He let himself be led, and he was for the church a pastor, a servant-leader,” the pope said of St. John. “This was his great service to the church. I like to think of him as the pope of openness to the Spirit.”

Pope Francis characterized St. John Paul as the “pope of the family,” a title he said the late pope himself had hoped to be remembered by. Pope Francis said he was sure St. John Paul was guiding the church on its path to two upcoming synods of bishops on the family, to be held at the Vatican this October and in October 2015.

The pope invoked the help of the two new papal saints for the synods’ success, and he prayed, “May both of them teach us not to be scandalized by the wounds of Christ and to enter ever more deeply into the mystery of divine mercy, which always hopes and always forgives, because it always loves.”

Pope Francis has said the agenda for the family synods will include church teaching and practice on marriage, areas he has said exemplify a particular need for mercy in the church today.

In addition to Pope Benedict, making only his third public appearance since he resigned in February 2013, Pope Francis’ concelebrants included some 150 cardinals and 700 bishops.

Pope Benedict did not join the procession of bishops at the start of Mass, but arrived half an hour earlier, wearing white vestments and a bishop’s miter and walking with a cane; he sat in a section of the square designated for cardinals. Pope Francis greeted his predecessor with an embrace at the start of the Mass, drawing applause from the crowd, and approached him again at the end.

During the canonization ceremony, which took place at the beginning of the Mass, devotees carried up relics of the new saints in matching silver reliquaries, which Pope Francis kissed before they were placed on a small table for veneration by the congregation.

St. John’s relic was a piece of the late pope’s skin, removed when his body was transferred to its present tomb in the main sanctuary of St. Peter’s Basilica.

Floribeth Mora Diaz, a Costa Rican woman whose recovery from a brain aneurysm was recognized by the church as a miracle attributable to the intercession of St. John Paul, brought up a silver reliquary containing some of the saint’s blood, taken from him for medical testing shortly before his death in 2005.

The Mass took place under cloudy skies with temperatures in the low 60s, and only a sprinkle of rain fell just before the 10 a.m. start of the liturgy. Huge tapestries bearing portraits of the two saints hung from the facade of the basilica, and the square was decorated with 30,000 roses and other flowers donated by the nation of Ecuador.

The square and the broad Via della Conciliazione leading up to it were tightly packed with approximately half a million pilgrims, many of whom had been standing for hours before the start of Mass. Among the many national flags on display, the majority were from Poland, the native land of St. John Paul.

The Vatican estimated that 800,000 attended the ceremony in Rome, with overflow crowds watching on giant-screen TVs set up at various locations around the city. The 2011 beatification of Pope John Paul drew more than 1 million people, according to Italian police estimates at the time.

Pope Francis spent half an hour personally greeting the delegations following the Mass. He then rode in his popemobile through the square and adjacent avenue, drawing cheers and applause from the crowds, for about 20 minutes until disappearing at the end of the street.

The canonizations of both popes came after extraordinary measures by their successors to expedite the process. Pope Benedict waived the usual five-year waiting period before the start of a sainthood cause for Pope John Paul shortly after his death, when he was mourned by crowds shouting “Santo subito!” (“A saint at once!”). In the case of St. John, Pope Francis waived the usual requirement of a second miracle before a blessed can added to the church’s canon of saints.