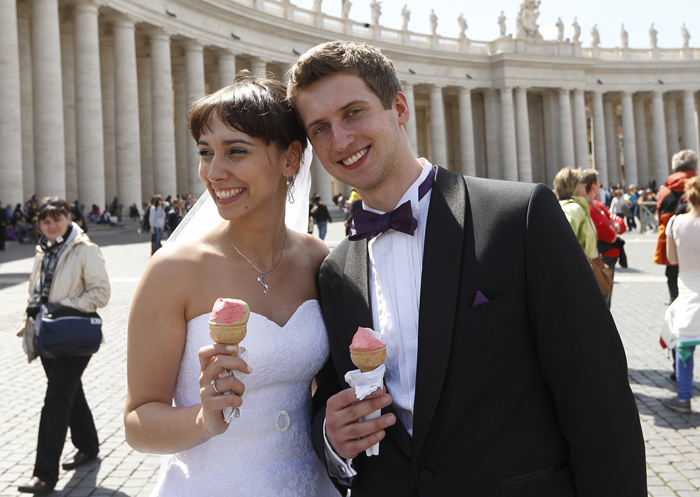 VATICAN CITY (CNS) — Through the sacrament of matrimony, married couples are called to be living icons of God’s love in the world, Pope Francis said; and when they fight — and all couples do — they don’t have “to call the United Nations,” but find simple words and gestures to say they are sorry.

Concluding a series of talks about the sacraments, Pope Francis used his general audience April 2 to focus on marriage, and he asked the estimated 45,000 people gathered in St. Peter’s Square to pray for the world’s families, especially for couples experiencing difficulty.

The sacrament of marriage, he said, “leads us to the heart of God’s plan, which is a plan of covenant with his people and with all of us.”

“We were created for love as a reflection of God and his love,” the pope said. “In the conjugal union, a man and a woman fulfill this vocation under the sign of reciprocity and a full and definitive communion of life.”

Marriage is a response to a specific vocation and “must be considered a consecration,” he said. “The man and woman are consecrated for love. Through the sacrament, the spouses are given a real mission to make visible — even through simple and ordinary gestures — the love with which Christ loves his church.”

“The plan that God has for marriage is really something stupendous,” he said.

Calling married couples “an icon of God’s love for us,” Pope Francis also said the fact that husbands and wives are human means that sometimes the image can appear slightly tarnished.

“We all know how many difficulties and trials spouses face. What is important is to keep alive a bond with God, who is the foundation of the matrimonial bond,” he said. Marriages are stronger when husbands and wives pray for each other and with each other.

But prayer doesn’t mean there always will be peace and harmony, he said. The demands of work, finances and raising children can frustrate couples and lead to arguments.

“There are always fights in a marriage, aren’t there?” he asked the crowd. “Sometimes plates fly. You’re laughing, but it’s the truth.

“The secret, though, is that love is stronger than an argument,” the pope said. “Don’t end your day without making peace. It’s not necessary to call the United Nations and have them come to your house to broker the peace. A little gesture, a caress, can suffice.”

“Marriage is beautiful and we must always safeguard it,” he said.

Pope Francis repeated his recommendation that couples make frequent use of three “magic words”: “May I?” “Thank you” and “Sorry.” With the three phrases, with prayer and by making up before going to bed, “your marriage will continue,” he said.

At the end of the audience, which took place on the ninth anniversary of the death of Pope John Paul II, Pope Francis asked people to prepare for the late pope’s canonization April 27 with prayers and by “reviving the patrimony of faith he left.”

“Imitating Christ, he was an untiring preacher of the word of God, of truth and of goodness,” the pope said. “He turned even his suffering into something good.”

“May his intercession reinforce our faith, hope and love,” Pope Francis prayed.

PREVIOUS: Pope asks Curia to find ways to implement ‘Joy of Gospel’ in its work