Pope to priests: Look for the exit, go out into world, serve with love 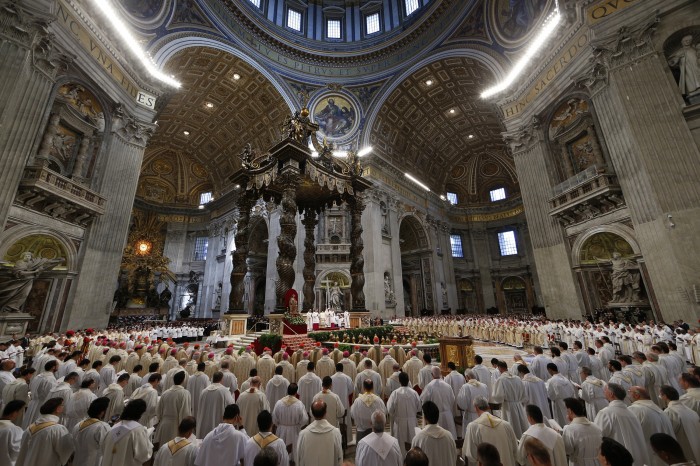 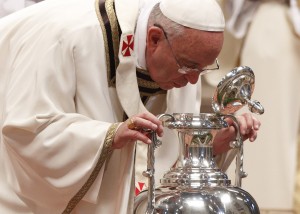 VATICAN CITY (CNS) — A priest is called to be in the midst of his flock, protecting his people, searching for those who are lost and always serving those in need, Pope Francis told the world’s priests.

If a priest wants to overcome those inevitable moments of sadness, exhaustion and boredom as well as discover his true identity, he must head for the exit sign, going outside himself to be with God and his people, he said April 17 during the chrism Mass in St. Peter’s Basilica.

He must also be a dutiful servant who listens to people’s need and builds a church whose doors are wide open, offering refuge for sinners, a home for the homeless, comfort for the sick and God’s word and joy for the young, he said.

Deacons carried the sacramental oils in large silver urns to the main altar to be blessed by the pope.

Joined by more than 1,500 priests, bishops and cardinals, Pope Francis led them in a renewal of their priestly vows and a reflection on what it means to be a priest, in a homily that was lengthier than usual.

He focused on the meaning of being anointed through ordination, emphasizing that Holy Thursday was the day Jesus shared his priesthood with the apostles by anointing them with “the oil of gladness.”

“Priestly joy is a priceless treasure, not only for the priest himself but for the entire faithful people of God,” the pope said.

He said it’s not an exaggeration, given the “grandeur of the gift granted us” to minister and serve, to say the priest is a very small person.

While “in that littleness we find our joy,” he said, being “little” without God spells danger.

“No one is more ‘little’ than a priest left to his own devices.”

Priestly joy must be sought and rooted in God’s love and it can find protection from evil in prayer to Mary, he said.

Self-denial, forsaking earthly happiness and giving oneself to others mean the priest “has to seek his joy from the Lord and from God’s faithful people. He doesn’t need to try to create it for himself.”

Nor should the priest be trying to carve out his own identity because “there is no identity — and consequently joy of life — without an active and unwavering sense of belonging to God’s faithful people,” he said.

“The priest who tries to find his priestly identity by soul-searching and introspection may well encounter nothing more than ‘exit’ signs, signs that say: Exit from yourself, exit to seek God in adoration, go out and give your people what was entrusted to you.”

The people of God “will make you feel and taste who you are,” he said.

They will also be able “to protect you, to embrace you and to help you open your heart to find renewed joy” during those moments a priest finds himself feeling isolated, gloomy, listless and bored, “which at times overcome us in our priestly life and which I too have experienced,” the pope said.

With his infinite compassion “for all the little ones and the outcasts of this earth, wearied and oppressed like sheep without a shepherd,” Jesus calls people to his ministry, so that he can be present and work “in the person of his priests, for the good of his people.”

Like an attentive servant, the priest “makes the church a house with open doors, a refuge for sinners, a home for people living on the street, a place of loving care for the sick, a camp for the young, a classroom for catechizing children,” he said.

The priest must be wherever there are people in need or searching; he needs to know how to listen, and feel driven by Christ to lift burdens with mercy and encourage hope with charity.

He asked that people pray for vocations so that when young people hear the call to religious life, they have “the stroke of boldness to respond willingly.”

He asked for prayers for the recently ordained, that they never lose the “joy sparkling” in their eyes as they “go forth to devour the world.”

He also prayed for elderly priests and those who have served many years, that they may “gather their strength and rearm themselves, get ‘a second wind.'”

Later in the day, the pope was scheduled to celebrate the Holy Thursday Mass of the Lord’s Supper at a Rome rehabilitation facility for the elderly and people with disabilities.

He also was going to wash the feet of four women and eight men with different disabilities and ranging in ages from 16 to 86. Of the 12 chosen, nine are Italian, one woman is from Ethiopia, one young man is from Cape Verde and one man from Libya is Muslim, according to organizers.

NEXT: Jesus wants everyone to serve others with love, pope says