What ballast is in your boat?

Readings of the holy Mass – Seventh Sunday of Easter

Jesus is ‘going away,’ but his Spirit remains with us

Readings of the holy Mass – Sixth Sunday of Easter

Transformed in love to serve one another

Readings of the holy Mass – The Fifth Sunday of Easter

The Mass in Focus

(See the readings for the Second Sunday of Easter, Divine Mercy Sunday, April 27)

The Risen Jesus greets his disciples saying: “Peace be with you. As the Father has sent me, so I send you.” The disciples were hiding away in a locked room that evening of the “first day of the week.” They were afraid. When Jesus appears in their midst he greets them with a word of peace. Twice he says: “Peace be with you.” The words are an expression of mercy, grace and consolation.

The fear the disciples were experiencing was based on what had just happened to Jesus. He was arrested, tried falsely, tortured and underwent the gruesome death by crucifixion. For the most part the disciples fled when Jesus as arrested abandoning the One they were following. Only Mary, the Beloved Disciple and some of the women disciples remained to the end.

Now gathering in this locked room the disciples are still trying to cope with what had transpired three days ago. They were disoriented, confused and scared. When Jesus offers the greeting of peace he dispels the fears, he heals the wounds of doubt, he forgives those who were quick to abandon him and he invites them into his friendship.

“Peace” is the term used to designate a “right” or “good” state in a relationship. In other words when persons or peoples are described in a state of peace it means that they have a good relationship with each other.

At the first resurrection appearance described in the Gospel for today’s Mass, St. Thomas was notably absent. He gets his well known attribute of “doubting” from his response to the others when they tell him the Lord has risen. Yet all doubts are removed when Jesus appears again a week later. This time Thomas is present.

Jesus once again offers the greeting of “Peace be with you.” He immediately offers Thomas his hands and shows him his side. He is real. He is alive. His hands have holes where the nails were hammered through. His side is lacerated from the spear. It is Jesus but he is not dead, he is risen. 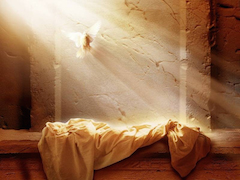 Thomas immediately replies with the great profession of faith: “My Lord and my God.” The healing is now complete. Thomas will now be able to go forth along with the other disciples to proclaim the resurrection and the Gospel.

The first reading from Acts of the Apostles moves us forward a little in time. The effects of the peace established by Jesus are seen in the lives of the early Christians. A communion is established among them through the peace of Christ. The community is described as devoting “themselves to the teaching of the apostles and to the communal life, to the breaking of bread and to prayers.” Their lives are bound together in Christ.

They are keenly aware of the communal relationship that has been established through Jesus’ passion, death and resurrection – so much so that they held “all things in common.” Their lively faith helped fortify their communion with Christ and with each other. Many other people were attracted to their witness and “every day the Lord added to their number those who were being saved.”

Jesus came that we might have salvation through Him. The passage from the First Letter of St. Peter in today’s second reading begins by reminding us of the salvation we have in Christ Jesus: “Blessed be the God and Father of our Lord Jesus Christ, who in his great mercy gave us a new birth to a living hope through the resurrection of Jesus Christ from the dead, to an inheritance that is imperishable, undefiled, and unfading, kept in heaven for you who by the power of God are safeguarded through faith, to a salvation that is ready to be revealed in the final time.”

The passage continues inviting us to rejoice in the present time even though we may have to endure times of suffering, grief or trials. These trials serve only to strengthen us in the faith we have been given. In the end these will be removed but for now we endure them through hope in the salvation that has been already won for us in Christ.

“Although you have not seen him you love him; even though you do not see him now yet believe in him, you rejoice with an indescribable and glorious joy, as you attain the goal of your faith, the salvation of your souls.”

“Peace be with you,” Jesus says to his disciples then and he says it again to us his disciples in the present age. His peace, given through his passion, death and resurrection, fills us with life and hope. As we continue to celebrate Easter, we proclaim with great voice “The Lord is risen, he is risen indeed, alleluia, alleluia” so that all may know and come to experience the peace that he offers us and the salvation he won for us.

Msgr. Joseph Prior is pastor of St. John the Evangelist Parish, Morrisville.

PREVIOUS: Readings of the holy Mass – Second Sunday of Easter

NEXT: Readings of the holy Mass – Third Sunday of Easter