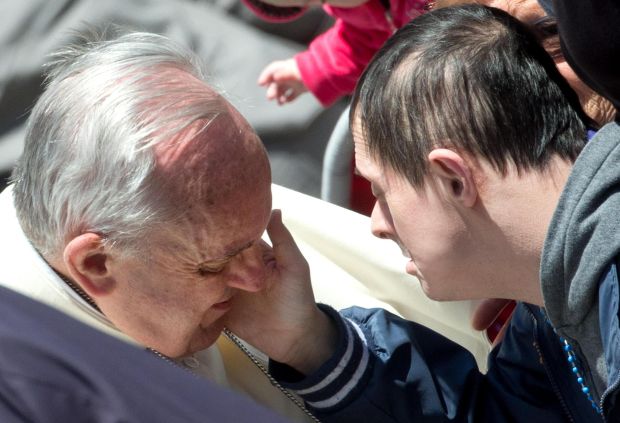 A young man touches the cheek of Pope Francis during the pontiff's weekly audience in St. Peter's Square at the Vatican May 14. (CNS photo/Claudio Peri, EPA)

VATICAN CITY (CNS) — God is always by our side, never giving us more than we can handle, Pope Francis said.

The countless women and men who stand tall through enormous difficulties, pain and especially persecution, are armed with the divine gift of fortitude that gives them the strength and hope to go on, he said.

“It will do us good to think about these people: If they can do it, why can’t I? Let’s ask the Lord for the gift of fortitude,” he said during his weekly general audience in St. Peter’s Square May 14.

Highlighting some of the tragedies facing people today, the pope made a special appeal at the end of his audience talk. He urged everyone to work together to prevent the “shameful massacres” of hundreds of immigrants who drown in the Mediterranean while attempting to reach Europe from North Africa.

The pope’s appeal came after two boats sank attempting to make the crossing in early May; 53 bodies were recovered and about 250 people rescued, but hundreds more were thought to be missing as of May 14.

Pope Francis also said his prayers were with those killed after a mine explosion in Soma, Turkey. Government authorities said the explosion May 13 left 205 people dead and dozens more trapped May 14 in underground tunnels.

In his main audience talk, the pope continued a series on the seven gifts of the Holy Spirit: wisdom, understanding, counsel, fortitude, knowledge, piety and fear of the Lord.

Looking at the gift of fortitude, Pope Francis said, “sometimes we can be tempted to let ourselves be taken over by laziness or worse, discouragement, especially when facing the strain and trials of life.”

God, like a sower of seeds, is always spreading his word in the world, the pope said, showing the way toward peace and salvation.

However, the Gospel message doesn’t always bear fruit, he said. But when it does, it’s because the Holy Spirit has prepared “the soil” and cleared the way “in our hearts, freeing us from the lethargy, the uncertainty and the many fears” that prevent his word from taking root.

It is easy for life’s many difficulties and hardships to block the way — like the everyday struggles of supporting one’s family and trying to raise children, but also the more severe tragedies of persecution and martyrdom.

However, the pope said, “there is no lack of Christians in many parts of the world who continue to celebrate and give witness to their faith, with deep conviction and serenity, and they hold strong even when they know that it may carry with it a high price.”

Everyone knows someone who is a “hidden saint,” he said, a person who brings honor to all Catholics, who “honors our church because they are strong, strong in carrying on in life, in their families, their work, their faith.”

“They do it because the Spirit is helping them,” he said. “They have the gift of fortitude to carry out their responsibilities as individuals, as fathers, mothers, brothers, sisters, citizens. We have many, many” of these “every-day saints, saints hidden among us.”

People should always remember what St. Paul the Apostle said: “I have the strength for everything through him who empowers me,” the pope said.

It shows that “the Lord gives strength, always. He’s never missing. The Lord doesn’t try us beyond what we can bear. He is always with us.”

“Pray to the Holy Spirit so that the gift of fortitude may lift up our hearts and bring new strength and enthusiasm to our life and our journey following Jesus,” the pope urged people at his audience.

PREVIOUS: Seeing, through art and nature, as a way of praying

NEXT: Did that baptism 17 years ago really count?