Needs for ministry to Hispanics loom as large as their population 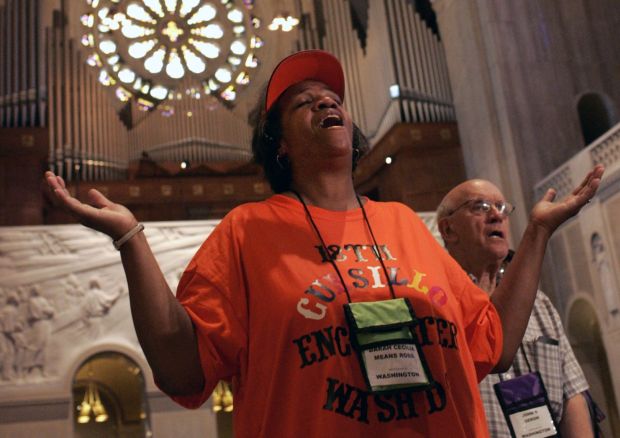 CHESTNUT HILL, Mass. (CNS) — Training of pastoral leaders and provision of most other resources for Hispanic ministry aren’t keeping up with the fast-approaching time when Hispanics will make up the majority of Catholics in the United States, according to a new report.

“Hispanic Catholics have reached critical mass in the church,” said Hosffman Ospino, lead author of the National Study of Catholic Parishes with Hispanic Ministry. He said 55 percent of all U.S. Catholics under the age of 30 are Hispanic and Hispanics account for 71 percent of the growth in the U.S. Catholic population since 1960.

“Ignoring the growth of Hispanic Catholics in the United States would be self-defeating for our churches and schools,” he added.

Ospino, assistant professor of theology and ministry at Boston College in Chestnut Hill, presented his findings from the first major survey of how parishes are handling the rapid demographic shift May 5 at the college.

Hispanics currently account for about 40 percent of all U.S. Catholics and their share of the population is continuing to increase. Nationwide, 4,358 parishes — almost one-quarter of the U.S. total — were identified as having some sort of organized ministry to Hispanics.

The study cited many signs of vitality in parish Hispanic ministry — including youth, a strong permanent diaconate system and thriving apostolic movements. But other areas require urgent attention, it said.

Among the “urgent dynamics” of parish Hispanic ministry that are in need of attention, it listed: disproportionately limited financial and human resources, a “disquieting gap” in Hispanic enrollment in Catholic schools, and a cohort of pastoral leaders who are approaching retirement age with too few people in training to replace them.

The study pointed out that the oldest Catholic parishes under the flag of the United States were and continue to be Hispanic. 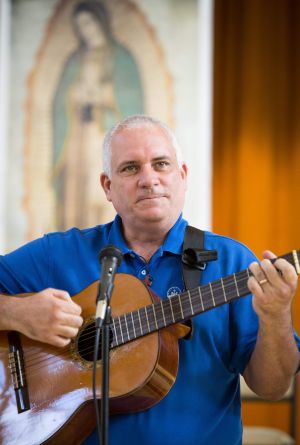 Deacon Juan Carlos Pagan, a program coordinator in Hispanic ministry for the Diocese of Lafayette, La., leads the music at a 2013 encuentro in St. Augustine, Fla. (CNS photo/Tom Tracy)

In the Southwest, a vibrant Catholic Church existed long before the United States acquired parts of Mexico, making for Hispanic-dominated parishes that predated the development of “national” parishes. National parishes were created in the 19th century to minister to European immigrants such as Germans, Italians and Poles, intended to be a temporary system for helping newcomers maintain their faith connections while they integrated.

As the study notes, “when absorbing the annexed Mexican territories, long-standing Hispanic parishes were typically treated as ‘only’ national parishes,” although many different nationalities fall under the cluster of Hispanic.

The report is a summary of the findings of a national study, conducted by the Boston College School of Theology and Ministry in collaboration with the Center for Applied Research in the Apostolate of Georgetown University. Several future reports will delve into angles such as education and leadership training, Ospino told Catholic News Service.

The study is based on responses to surveys sent to diocesan and parish leaders who work in Hispanic ministry. Parishes were counted as offering Hispanic ministry if they offer Mass or religious education in Spanish, for example, even if they don’t formally have a Hispanic ministry program, Ospino said.

Other elements in the report include discussion of leadership structures and leadership development; apostolic movements such as Cursillo and Communion and Liberation; and programming and education for children, youth and adults

In an event at Boston College where the study was released, Mark Gray, of the Center for Applied Research in the Apostolate at Georgetown University in Washington, said one conclusion he draws from the study that should catch the attention of church leaders is “if you don’t do Hispanic ministry well, then you face an uncertain future.”

Unlike past generations of immigrants, he said, people today have many more choices in where they can go to worship, whether another Catholic parish that offers something different, a non-Catholic Christian church that is welcoming or even the growing phenomena of dropping all religious affiliation.

“We call them drive-bys,” Gray said, because people will drive by a church that doesn’t offer what they need and go elsewhere.

Timothy Matovina, a University of Notre Dame professor of theology and executive director of that school’s Institute for Latino Studies, pointed to some of the study’s findings he thinks are significant: that two-thirds of the pastors doing Hispanic ministry are not Hispanic; that most of them got any training they have in Hispanic ministry on their own; and that just 13 percent said they received relevant training in Hispanic ministry in the seminary.

Matovina also observed that the immigrants from Latin America and the Caribbean who are adding to the surge of Hispanics in the church are arriving to find a different sort of church than did earlier waves of immigrants.

“A hundred years ago, immigrants arrived to an immigrant church,” he said. “Now they are arriving to a middle-class church.”

It will be important to the future of the church for the more established parts of the church, where there is more money and power, to think of the growing sector of less-wealthy Hispanics as deserving of their support as part of the same church, Ospino said.

Ospino told a story to illustrate how that’s relevant to meeting the pastoral needs of a working-class or poor group of newcomers.

He described a parish with a high level of immigrants that was in financial crisis. The parish was administered by a religious order that also ran three wealthier, nonimmigrant parishes in the same region. The religious order leaders went to the three wealthier parishes asking for support to keep the immigrant parish open. “They said no,” Ospino said.

In a subsequent interview with CNS, Ospino said perspectives such as that of the nonimmigrant parishes in that story illustrate a basic flaw in how many American Catholics think about the growth of Hispanics toward dominance in the church.