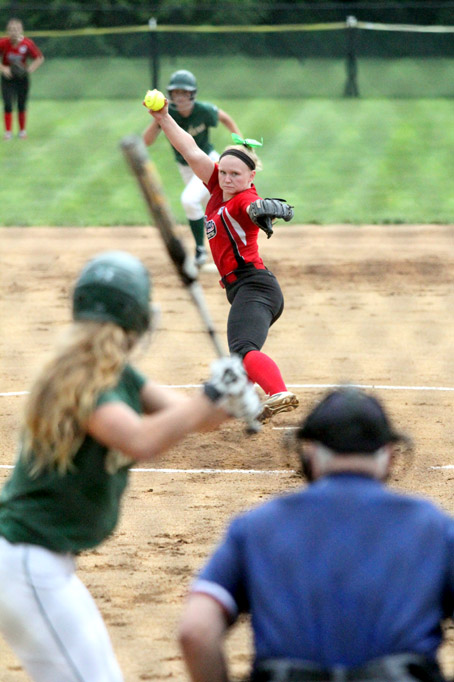 Archbishop Ryan pitcher Kerri Dadalski delivers a pitch in the championship game in which she gave up no runs on only one hit with seven strikeouts, retiring the side 1-2-3 in five of her seven innings. (Sarah Webb)

Sometimes the Holy Spirit moves people to acknowledge the most amazing things. It happened on Thursday afternoon.

Archbishop Ryan had just captured the Catholic League softball championship with a convincing 5-0 victory over Lansdale Catholic at Arcadia University. As soon as the game’s final out — a towering fly ball to left field — was swallowed up by sophomore Meghan O’Neil, the Ragdolls went ballistic, surrounding the pitcher’s mound with deafening shrieking and deep embraces.

Overhead, the clouds that had threatened to burst for the past hour suddenly unleashed a torrent of pounding rain. Swept in euphoria and celebratory family/friend mingling, no one from Archbishop Ryan minded being soaked.

Dadalski was referring to former coach Andy Hafele, who succumbed to cancer this past February after guiding Ryan’s program for 23 years. When Hafele passed, the reins – no pun intended – were handed to 12-year assistant Vince Capizzi for guidance and safekeeping.

From the first team meeting in late February, the Ragdolls dedicated the season to their beloved coach. They wore “AH” patches on their uniforms; donned T-shirts with the words “Archbishop Ryan Softball” on the front and “Forever in Our Hearts” on the back.

Then they went out and obliterated the competition, trailing a game only one time before finishing undefeated in a Catholic League that was loaded with copious talent and ability.

Beating Lansdale Catholic would be a chore, but as LC coach Paul Suder later admitted, it was as though Ryan simply refused to be denied.

“I would agree that this was definitely just one of those days,” Suder said. “We’re a good team, but Ryan played better. They deserved to win this.”

Stringing together seven singles, a walk, a sacrifice fly and a throwing error, the Ragdolls scored two runs in the second and three more in the third. O’Neil (two singles, run scored, RBI) and freshman first baseman Reilly Kerr (two singles, a walk, three runs batted in) provided most of the offense, which was more than enough for Dadalski, who also contributed two singles.

Moving her pitches with precision and confidence, Dadalski only surrendered a poorly played double (could have been considered an error, which would have given her a no-hitter) and two walks. She mowed down the frustrated Crusaders 1-2-3 in five different innings, striking out one batter in each inning to finish with seven.

Her only struggle occurred in the sixth. LC led off with a walk and the next batter had a 2-0 count. Inexplicably, the runner tried to steal (it was later revealed that she had missed a sign) and was caught easily by Ryan’s strong-armed sophomore catcher Sarah Ostaszewski, who earlier had scored two runs and, in the semifinal win over Little Flower, smashed a three-run homer to clinch the triumph.

“That’s pretty much when I knew that we were definitely going to win,” said Dadalski, one of six Ragdoll starters who graduated from Our Lady of Calvary School in Northeast Philadelphia. “I knew that even when I wasn’t on top of my game, my teammates were going to find a way to make it happen.”

Then came the seventh inning. As Dadalski was delivering what amounted to the game’s final pitch, there was a gentle stroke of lighting seen overhead. The umpires would have had to delay the contest via safety rules, but it didn’t matter when LC’s Alyssa Messina lifted a long drive to left field that precipitated Archbishop Ryan’s first Catholic League title since 1995.

Reached a few hours later after she had had a chance to digest her and her squad’s surreal accomplishment, Dadalski divulged a tender moment that had occurred in the clandestine quarters of the team bus.

Izzy Hoch, a sophomore who had played sparingly on varsity and was one of several players promoted to dress for the championship, told Dadalski and her teammates that with two outs in the seventh, the dugout was becoming increasingly concerned that the game would be delayed by rain.

Nearby was Hafele’s wife Maryellen, who told the girls not to worry.

“She said that Andy wasn’t going to let it rain, and sure enough, it didn’t rain until it was over,” Dadalski said. “That’s when it hit me. And that’s when I started crying.”

NEXT: Neumann-Goretti stays the championship course, wins another baseball title